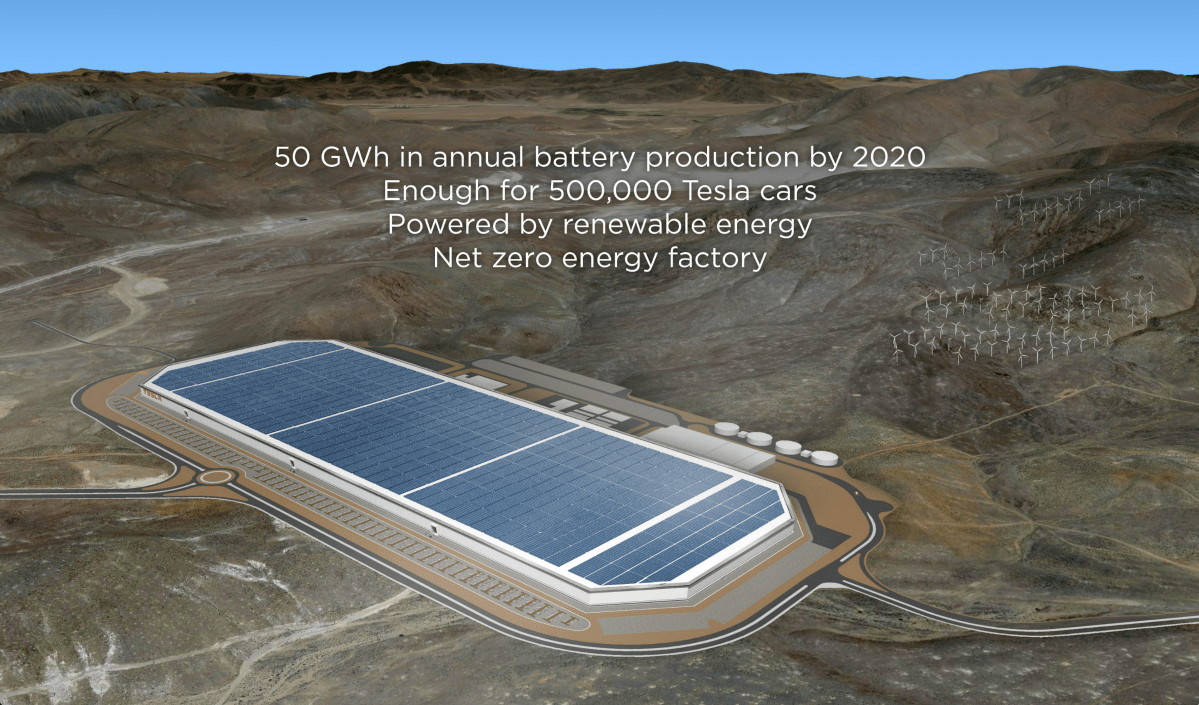 Tesla Motors today closed its deal to acquire the 980-acre site in an industrial park outside Reno where it has already begun pouring concrete for a giant lithium-ion battery factory.

Lance Gilman, a principal and partner with the Tahoe-Reno Industrial Center, told Fortune today that papers have been filed in the Storey County courthouse transferring the “gigafactory” site to the automaker. Tesla (TSLA) is getting the land for free, along with a $1.3-billion package of economic-development incentives it negotiated with Nevada.

Scheduled for completion in 2020, the gigafactory is intended to produce 500,000 battery packs a year, mostly to be shipped to the company’s auto-assembly plant in Fremont, California, for use its promised mass-market electric car.

Tesla CEO Elon Musk has said his company will start producing the car, priced at about $35,000, in 2017. He says the gigafactory—intended to double worldwide lithium-cell production—will cut battery costs by more than 30%, helping make the new car affordable. Tesla’s current Model S starts at about $70,000.

Legally, the giant industrial park, which Gilman manages, is giving the 980-acre gigafactory parcel to Tesla. But as part of the deal, the state of Nevada is paying the park’s owners $43 million for right-of-way to extend a four-lane road through the complex to US Highway 50, a major interstate. Gilman has sought the extension, which will cut travel times to and from the industrial park and open up thousands of acres for development, for more than 15 years. “That’s our reward,” Gilman told Fortune. “It’s going to happen. It’s because of Tesla that we’re willing to work this particular transaction.”

The state will also pay for construction of the road, called USA Parkway, at an estimated cost of $70 million. The extension is scheduled for completion by December 2017.

In addition, Tesla (TSLA) has options to purchase another 9,000 adjacent acres, including 7,000 acres for a wind-farm with the potential to produce about 140 megawatts of electricity, according to Gilman.

Musk has said Tesla plans to generate all the power for the project from renewable sources, including geothermal energy, and he hopes to make the battery plant a “net zero-energy factory.” A company rendering of the project show the wind-farm operational and the concrete roof of the giant building—more than a mile long and a quarter-mile wide—covered with solar panels. Conveniently for Musk, his cousin Lyndon Rive is the CEO and co-founder of solar energy pioneer SolarCity, and Musk himself serves as the company’s chairman.