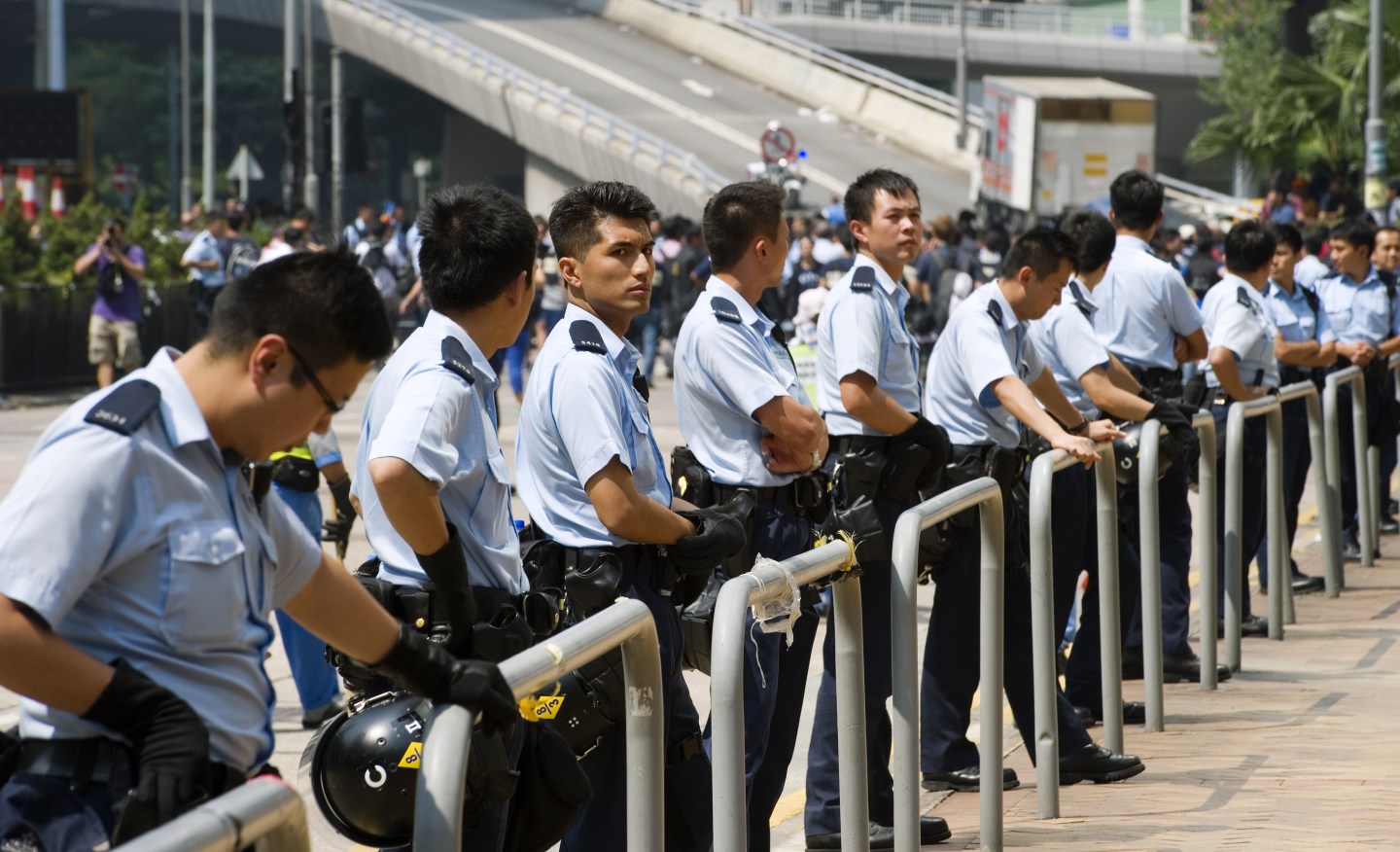 HONG KONG - OCTOBER 14: A police cordon protects other police officers resuming car traffic on Queensway as police just removed barricades set by pro-democracy 'Occupy Central' protesters in Admirality on October 14, 2014 in Hong Kong. In the morning of October 14, police removed barricades and re-opened Queensway lanes for traffic. A third week of civil disobedience movements continues in response to China's decision to allow only Beijing-vetted candidates to stand in the city's 2017 election for the top civil position of chief executive. Protestors are calling for open elections and the resignation of Hong Kong's Chief Executive Leung Chun-ying. (Photo by Lucas Schifres/Getty Images)
Lucas Schifres--Getty Images

In a setback to pro-democracy demonstrators currently occupying a large section of central Hong Kong, police reopened two major roads on Tuesday morning after a quick and clinical dismantling of the barricades painstakingly reinforced by protesters the previous day.

In the Admiralty district, about 70 officers stood guard with plastic shields as dozens of their colleagues, armed with pliers and chainsaws, made short work of the makeshift barriers that had been built from trashcans, bamboo poles and road signs, reinforced in places with concrete. The barricades blocked the major thoroughfare of Queensway.

There was hardly any resistance from the protesters, who could only watch helplessly as police completely locked down the road, loaded the barricade materials into three large trucks and carted them away.

But a handful of protesters sat at the police line with umbrellas and cloth masks, determined and defiant.

“We will rebuild the things we built,” said 21-year-old Nick Ko, who said he was upset but would not give up. “I don’t think they will use tear gas again.”

The clashes between supporters and opponents of the pro-democracy movement that took place the previous day were largely absent, with only a fewpeaceful encounters and debates taking place.

Monday marked the beginning of the third week of Hong Kong’s pro-democracy protests, dubbed the Umbrella Revolution after protesters used umbrellas to shield themselves from police pepper spray.

Thousands of citizens have taken to the streets demanding the right to directly elect Hong Kong’s leader without interference from the central government in Beijing, which insists on screening candidates for the city’s top post.

By Tuesday afternoon, traffic was flowing for the first time in a fortnight on Queensway — the location of the city’s High Court and the glitzy Pacific Place development of luxury shops, hotels and offices. The barricades in the main protest area on Harcourt Road — called “Umbrella Square” by protesters — remain intact.

A section of the Causeway Bay protest site a few kilometers away was also reopened earlier in the day, with police clearing the barricades across the westbound lanes of Hennessy Road in the early morning. About a hundred protesters remained in the still-barricaded eastbound lane, planning their next steps.

“It won’t harm the momentum of the movement,” said Alex Chow, the secretary general of the Hong Kong Federation of Students and a protest leader. “The main pressure on the government is the number of people supporting the movement.”

He added, “If the police keep eliminating areas one by one, it will trigger the people to come out again.”

A protester with the last name Leung, a 25-year-old lab technician who has been at the Causeway Bay site for 13 days, said police could dismantle barricades but students would fight back if police tried “to remove all of us at once.”