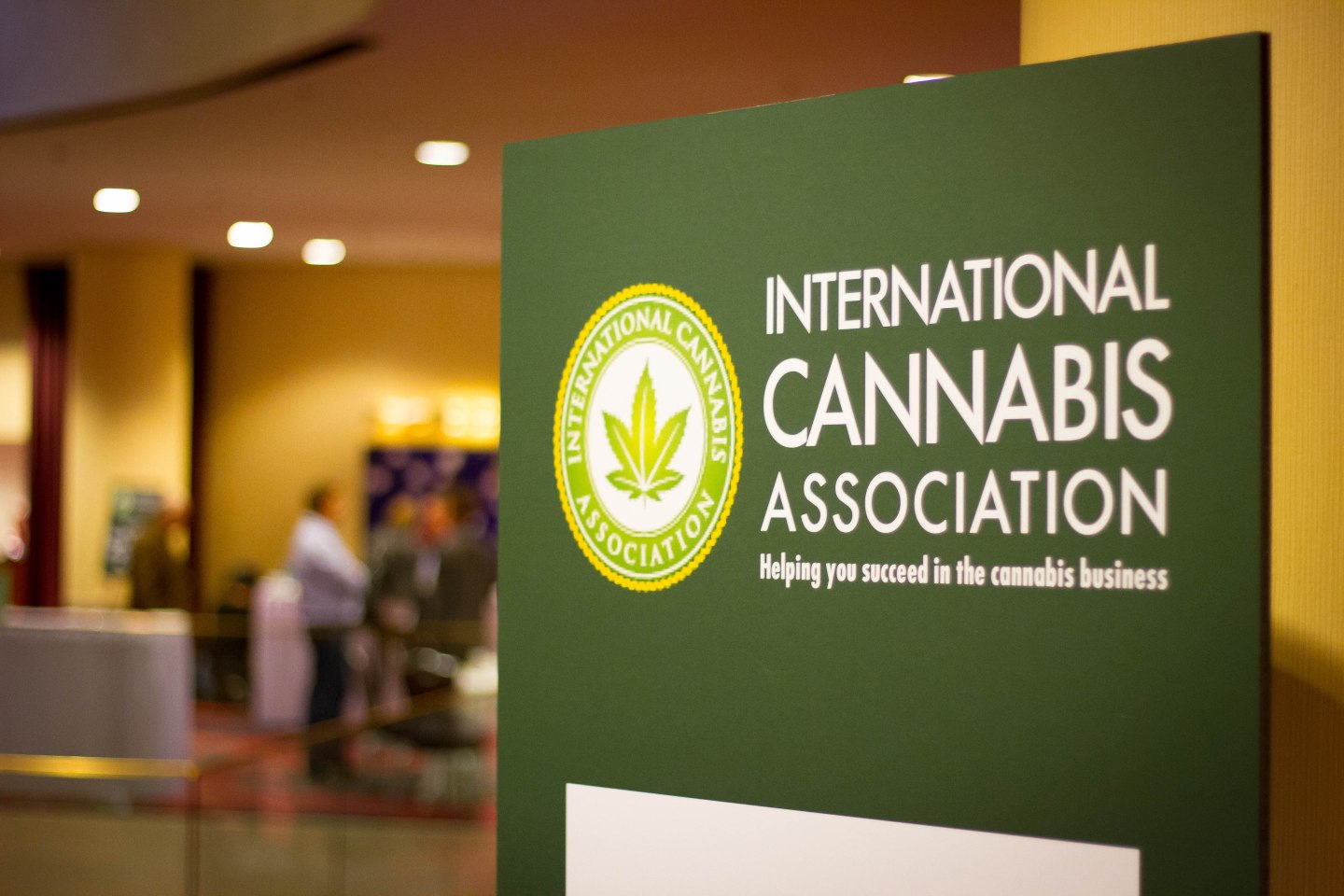 Hundreds of so-called “ganjapreneurs” swarmed New York this past weekend to learn about the business side of the cannabis industry, while also checking out products displayed by a few of the many companies with designs on hawking the next big marijuana-related item.

The International Cannabis Association (ICA) hosted its first East Coast Cannabis Business Expo from Saturday through Monday evening in New York City at the Times Square Marriott Marquis. The “educational conference and regulatory summit” was billed as an event for people with designs on staking out their own corner of the cannabis industry when the medical marijuana market hits New York sometime in the next couple of years, after a new law was signed earlier this year.

A spokeswoman for ICA says roughly 900 people attended this week’s conference, where they heard from some of those state regulators, including State Senator Diane Savino, who sponsored the medical marijuana bill in New York and who spoke at the conference and also hosted a campaign fundraiser. There was also a full slate of instructional seminars with topics ranging from “Seed to Sale Tracking” to “Employment Law Issues Arising out of Medical Marijuana Use.”

Those in attendance also mingled with dozens of vendors who have already established marijuana and hemp-related businesses in states where their products are already legal. Here’s a look at some of the most interesting products and businesses featured at the conference.

Anaheim, Calif., -based company G FarmaLabs makes high-potency THC-infused chocolates that won first place at this summer's Kush Expo in California. Looking to bring medical edibles to New York once the state's market opens up, G FarmaLabs' table at the ICA conference wisely featured only non-medical grade chocolates (i.e. no marijuana, because those products aren't yet legal here). But the company was still pushing stacks of regular chocolates that showed off the company's wide range of flavors, including new seasonal varietals such as pumpkin spice and apple cider pie, as well as the eye-catching "Chocolate n' Bacon" and "Peanut Butter & Jelly Swirl."

G FarmaLabs also makes vaporizers, pre-rolled joints and THC-infused oils. The company — which is less than a year old but already selling its products in 13 states where medical marijuana sales are legal — is also currently looking to raise about $5 million through a private stock offering to California residents only.

Founded by four buddies who recently moved from Chicago to Denver, Where's Weed is kind of like Yelp for marijuana in that it's a website where pot dispensaries can list information on their business and what they have in stock while customers offer reviews. Of course, the "Yelp of pot" market is already a somewhat crowded one, with websites such as Weedmaps and Leafly offering similar services. But, president and co-founder Tyler Bartholomew says, Where's Weed also allows marijuana dispensaries to update their menus and supply information through his company, with Where's Weed acting as a one-stop intermediary that will then provide that updated information to its rival websites, as well as Facebook.

Apeks Supercritical makes CO2-powered fluid extraction systems that look a little bit like espresso machines, but are actually used to make highly-concentrated essential oils from any plant, including lavender and cayenne peppers. Of course, the company's range of machines — which can cost anywhere from $30,000 to more than $150,000 with shipping — can also turn about half a pound of pot into an oil packed with THC, the main psychoactive component in marijuana. That, in turn, can be infused into edible products, or consumed with a vaporizer.

Apeks Supercritical is based in Ohio, where medical marijuana is not legal, so the company originally used hops, an ingredient in beer that is similar in composition to marijuana plants, to calibrate its machines to extract cannabis oil. That idea has certainly helped turn a profit. The company's sales director, Shawn Litterini, says profits more than quadrupled to more than $3 million last year, and the company expects that number to hit almost $9 million this year.

Southern California company HempMeds was out in force at the conference, pitching everything from hemp oil and beauty products to pet food. The company showed off its planned aNew pet nutrition line of dog treats infused with hemp oil and other pet supplements featuring cannabidiol (CBD), a compound found in hemp and cannabis that does not have the psychoactive properties of THC. The products still await approval from regulators at the Association of American Feed Control Officials — and some people debate the health-benefits of CBD — but HempMeds is billing the pet products as "healthy, hemp-based supplements for our four-legged friends."

Kannaway makes a whole line of "cannabis beauty" products, called Defined, that claim all sorts of anti-aging properties and actually feature "CBD-rich Hemp Oil" similar to that found in HempMeds' pet food. (Kannaway and HempMeds have the same parent company, Medical Marijuana, Inc.) Kannaway offers a line of moisturizers, salves, bath soaks and other beauty products it says contain natural and organic ingredients with "skin-renewing properties." The company actually operates a direct-selling model that a Kannaway spokesman likened to the model associated with Avon's door-to-door sales.