The battle of Ohio: clean energy vs. coal 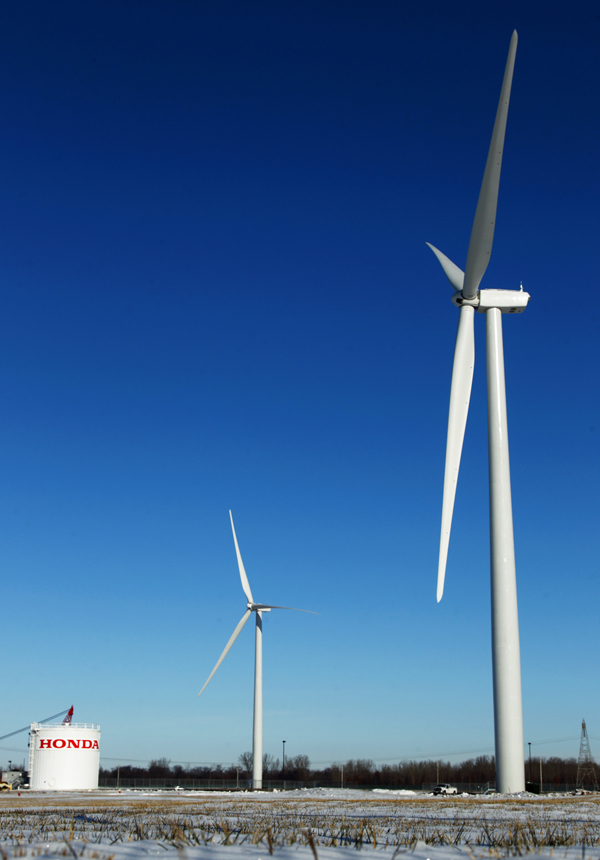 Western Ohio is Honda country. Since 1982, when the company’s first auto production plant went in at Marysville, some 30 miles northwest of Columbus on Highway 33, the Japanese automaker has built a manufacturing infrastructure that has transformed the bucolic area into an industrial powerhouse.

In addition to Marysville, one of the largest manufacturing facilities under a single roof in the U.S., Honda operates the Anna engine complex, a full-assembly facility at East Liberty, an R&D center near Marysville, and a transmission plant at Russells Point. It was at Russells Point last year that Honda took another transformative step by putting up a pair of wind turbines to help meet its massive need for electricity. Owned by ConEd Solutions and installed by Minnesota-based Juhl Energy, the 260-foot-high towers, each equipped with three blades more than half a football field long, supply about 10,000 megawatt hours a year—or about 10% of the plant’s power.

Today the turbines stand as a symbol of Honda’s loyalties in a contentious political fight over the future of renewable-energy policy in Ohio—one with national implications. In 2008 the state legislature passed one of the most ambitious renewable-energy laws in the U.S. The original legislation required utilities to get 25% of their power from renewable- and other clean-energy sources by 2025, while cutting their customers’ power usage by 22%. (Today Ohio gets just 1% of its total energy from renewables, according to the EPA, and 70% of its electricity comes from coal-fired power plants.)

However, in June, Ohio became the first state in the U.S. to roll back clean-energy mandates when Republican Gov. John Kasich—running for reelection in November—signed a bill called SB 310 into state law. The bill, which freezes standards for two years, was backed by deep-pocketed Ohio-based utilities and conservative groups. Coming just a week after the EPA announced tough new rules on carbon emissions from power plants, the freeze threw into question the future of government-supported renewable-energy markets nationwide.

Environmentalists and renewable-power providers fear that Ohio could be the spearhead for pushing back other states’ mandates for renewables. Despite five years of relatively robust investment in renewables here, the presence in Ohio of two of the nation’s largest utilities (AEP and FirstEnergy), along with the legacy coal industry (Ohio produced 26 million tons of coal in 2012), makes it a prime battleground for the struggle between clean energy and cheap, dirty coal. “This is ground zero,” says Sierra Club Ohio energy director Dan Sawmiller.

But there’s an interesting twist to the conflict: The environmental groups have been joined in their opposition to SB 310 by a less obvious ally—big manufacturers. The Ohio Manufacturers Association came out against SB 310, as did a handful of large companies such as Anheuser-Busch and, yes, Honda.

That’s not as surprising as it might sound. Auto manufacturing, one of the most energy-intensive businesses in the world, is gradually but decisively reducing its energy use and obtaining more of it from cleaner sources. Honda has trumpeted its “Green Factory” initiative, saying it plans to lower CO2 emissions from its plants 30% by 2020, compared with 2000 levels. And the carmaker has made it clear that it wants to cut its consumption of power from fossil fuels in order to be a better corporate citizen and to reap the accompanying good PR—as long as it makes good business sense. “Honda is always looking for opportunities to improve our efficiency and cost,” says Karen Heyob, the director of facility management for Honda North America. “I’m happy to say that we’ve kept energy usage stable this year despite significantly expanding our operations.”

MORE WITH LESS A look back at 30 years of energy use by U.S. manufacturers shows a peak in the mid-1990s. Gains in efficiency are helping to keep power use down despite a recent surge in activityGraphic Source:

The embrace of clean energy by industry is hardly a Honda-only trend. Manufacturers of products from camshafts to catheters are finding that using energy more efficiently—and reducing their reliance on traditional, utility-centric, fossil-fuel-dominated resources—is good not only for the corporate image, but also for the bottom line. Prodded by government regulations, shareholder unrest, and a changing energy landscape, the manufacturing sector is transforming the way it sources and uses energy.

This transformation is being driven by forces both outside and inside the walls of manufacturing plants. The external factors are well documented: Falling prices for natural gas and renewable energy have made clean, distributed (i.e., located at or close to the plant) electricity generation a compelling business case. The effects of the shale gas bonanza on U.S. manufacturing are somewhat in dispute, but there is no question that low-cost natural gas is providing a competitive advantage to companies that make stuff in the U.S. According to the U.S. Manufacturing Purchasing Managers Index, a measure developed by financial research firm Markit, manufacturing activity in the U.S. in September reached its highest point in more than four years. Factory employment, though still well below pre-2008 levels, is surging as well, reaching its highest level since March 2012. A large part of the increase can be attributed to inexpensive natural gas.

The use of renewable energy in manufacturing, meanwhile, hovers at 8% to 9%, and it’s not guaranteed to soar. A June study by the International Renewable Energy Agency found that the figure could grow to more than a quarter by 2030, or a third if some form of carbon pricing takes effect—or, under current deployment plans and government policies, it could stagnate at 10%. Those are global figures; the U.S., with accelerating coal plant retirement and tightening government regulations of carbon emissions from power generation, should see increases at the high end of that scale.

The benefits of alternative energy are not evenly distributed across all manufacturing locations, of course. Honda’s Ohio complex, for example, is within the service area of Buckeye Power, a rural electricity co-op that has been untouched by utility deregulation and still gets the bulk of its power from coal. Honda had to reach a power purchase agreement with Buckeye in order to erect the Russells Point turbines. But now every megawatt that Honda generates from wind is one that doesn’t derive from coal.

On a recent evening the turbines turned lazily in the breeze while casting long shadows across the adjoining cornfields. It’s a good bet that Honda will soon be adding more turbines to its facilities. Moving from centralized coal plants to distributed power generation from renewable sources benefits manufacturers because users control the assets, and long-term prices are fixed. What’s more, shifting to clean energy now mitigates the risk of future carbon taxes or other forms of carbon pricing, says Barry McClelland, Honda’s longtime energy and operations chief, who retired in June but still heads the energy committee of the Ohio Manufacturers Association. “Honda’s view is you’ve got to go with the change,” says McClelland. Perhaps if Honda leads the way, others in Ohio will follow.