IDC: Apple’s Mac broke into the top 5 worldwide for the first time 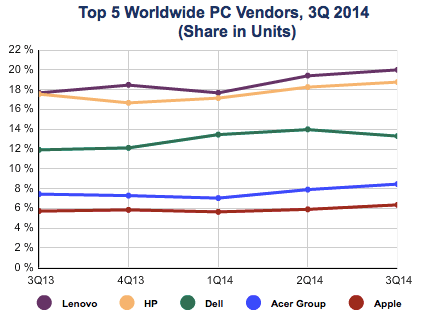 You can take it either a sign of the Mac’s resurgence or the rest of the PC industry’s continued decline, but Apple for the first time has broken into the ranks of IDC’s top 5 computer vendors worldwide.

“The company’s steady growth, along with recent price cuts and improved demand in mature markets, has helped it to consistently outgrow the market,” according to IDC’s Wednesday press release.

These are preliminary estimates — Apple will report actual Mac sales in less than two weeks — but according to IDC the company shipped 4.9 million Macs last quarter, up 8.9% year over year, to take a 6.3% share of the global PC market.

Gartner, which also released its third quarter estimates Wednesday, begged to differ. In its worldwide list, Apple failed to overtake ASUS and was lumped, once again, with the also-rans. Link: Press release.

Both Gartner and IDC rank Apple as No. 3 in the U.S., where the company has been for some time.

Below: IDC’s and Gartner’s spreadsheets.