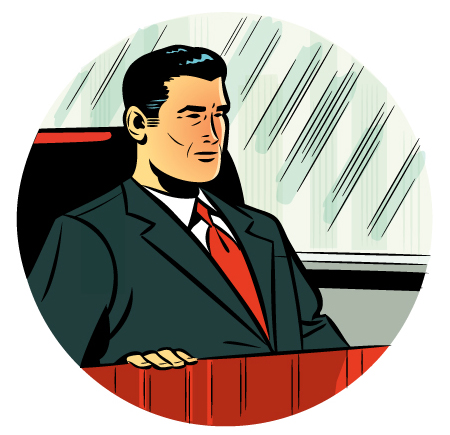 Illustration by Mark Matcho for Fortune

There are employees, customers, investors, analysts, activists, regulators, and, of course, the media to please. Luckily, there’s help. While support staffs and functions vary widely at each company, most modern-day CEOs have a compendium of image experts at their disposal. Richard Marshall, a managing director at executive search firm Korn Ferry, says CEOs are managed increasingly like political candidates. Here, some of the services the well-prepped CEO uses to keep his reputation in check.

Not everyone arrives in the C-suite with polish and stellar communications skills—but many are getting discreet help to acquire them. CEOs rarely open up about coaches, but John Wood of Heidrick & Struggles says he’d be surprised if the majority don’t have a trusted adviser they turn to.

More and more CEOs are delegating their tweeting and other postings to staff. “That’s the worst way to do it,” says Paul Argenti, a professor of corporate communications at Dartmouth’s Tuck School of Business. “Ninety-five percent of the activity I see is really bad blog posts.”

It may sound quaint in the age of Twitter, but execs still need to stand at a podium now and then. Whether addressing employees or the Economic Club of Chicago, the trick, says Selim Bingol, an ex-SVP of communications at GM, is to channel the way the CEO talks and thinks.

Some 40% of communications chiefs (who often get a C-suite title: CCO) now report directly to the CEO, with many melding roles in marketing, investor relations, and government affairs. The average Fortune 500 comm. department employs 24, though the size can range from three to 600.

Sex scandal? Oil spill? Data breach? Heaven forbid, all three? When times get tough, a CEO needs reinforcements—and you’ve got to know who to call, quick. For that reason, companies form relationships with firms that specialize in damage control. Especially hot these days: firms that handle activist investors.

Sometimes even a robust communications staff is not enough: There are times—as when launching a new product or making an acquisition—when top executives need an outside perspective. That’s when many Fortune 500 companies lean on outside agencies for counsel.

The shareholder meeting will be televised (or at least webcast). The modern CEO must be camera-ready, voice trained, and comfortable commanding a room. Many are, but a number of CEOs still get refresher courses before big investor presentations or, say, the sit-down with 60 Minutes.

CEOs like metrics, and in -another sign of campaign creep, they are increasingly turning to reputation research in the way politicians look to polls.

For today’s CEO, the challenge is often to be seen as both on task and as a visible thought leader. Hence, the so-called executive-positioning pro to help point a CEO in that -Davos direction. In the end, says Bingol, who began his career as a speechwriter at AT&T, “it’s really got to help sell more widgets.”

Though most don’t cop to it, many bosses get some help primping. The goal? Be current but not too trendy, says stylist Ariel Lawrence. Executives make for easy clients compared with celebrities, she says. “They’re decisive.”