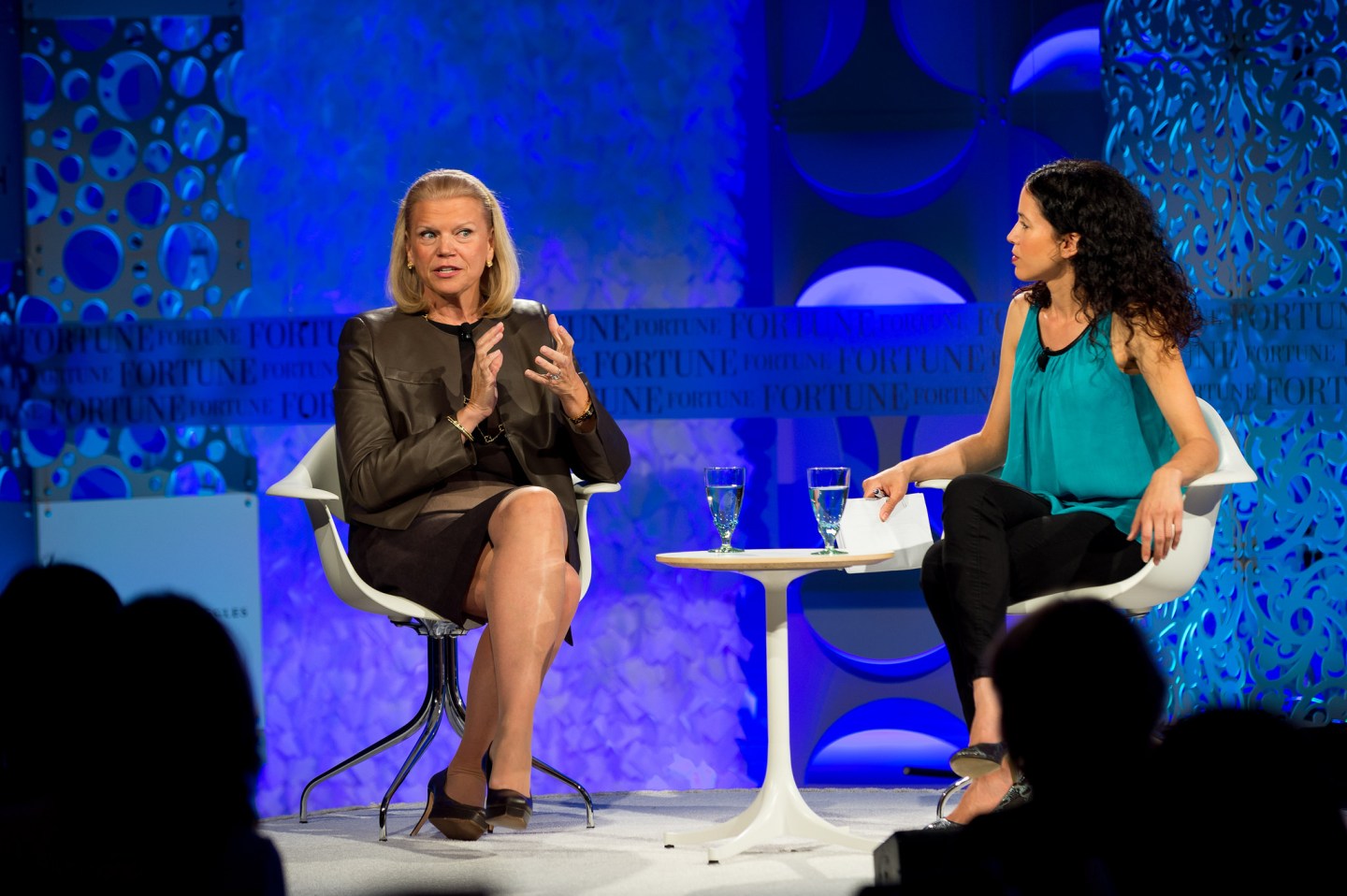 Ginni Rometty wasn’t afraid to get a little introspective in front of her high-powered peers. “Growth and comfort don’t coexist,” she said, smiling. “That’s true for people, for companies, for nations.”

Speaking at Fortune‘s Most Powerful Women Summit in Laguna Niguel, Calif. on Tuesday, IBM’s chief executive clearly had transformation on her mind. Earlier this year, her smile was plastered all over newsstands with the cover line, “Can IBM Ever Be Cool?” (That would be the Oct. 6 issue of Fortune, of course.) Later this month, she and her team will release the company’s latest financial results with the hope that the figures will demonstrate a continued turnaround for the 113-year-old technology company, one in which it turns its back on businesses that served it well for decades and toward new ones focused around so-called cloud computing.

“Every generation gets to reinvent the company,” she recalled saying to her team after she was named CEO in 2012. “This is our time.”

Rometty, for better or worse, has become the new face of change at IBM (IBM). In front of an audience that included Clinique president Jane Lauder and Berkshire Hathaway CEO Warren Buffett, Rometty outlined why she divested $6 billion of IBM’s assets over the last two years in pursuit of a “higher-value” strategy that embraced mobile devices, data analytics, and, of course, the cloud.

“Something I ask myself every day is, ‘Did I make decisions or do things that only I can do?'” she said to her interviewer, Fortune senior writer Michal Lev-Ram. “If I’m doing things that someone else can do, then I’m wasting my time.”

She added: “Strategy is about deciding what you will do and what you won’t do.” That the statement was redundant didn’t seem to matter; saying it seemed to help the audience reconsider it.

Rometty, who admitted to having a penchant for series of three, then outlined her trio of rules for transformation.

And the last: “Relentless reinvention,” she said. “You kind of have the mindset of being a steward for the longterm.”

But how to instill a culture of transformation in one of the largest technology companies on the planet—one, at last count, with more than 430,000 employees? Education. Rometty, outlining a list (of three, naturally) of cyber security concerns she raises with clients, seemed to be sharing a list of corporate culture lessons, too.

“First off, internal is your biggest issue. Whatever you do, you’ve got to raise the I.Q. of your workforce. The key is, you train ’em, you test ’em, you keep trying to trick ’em,” she said. “Second, you have to have a fast response team. Everyone will have a problem. Third, you have to protect your data. Don’t think of it as a home with alarms on all the windows. Assume bad things are inside.”

Rometty smiled again. “The greatest challenge for us all right now,” she said, “is the pace of change.”