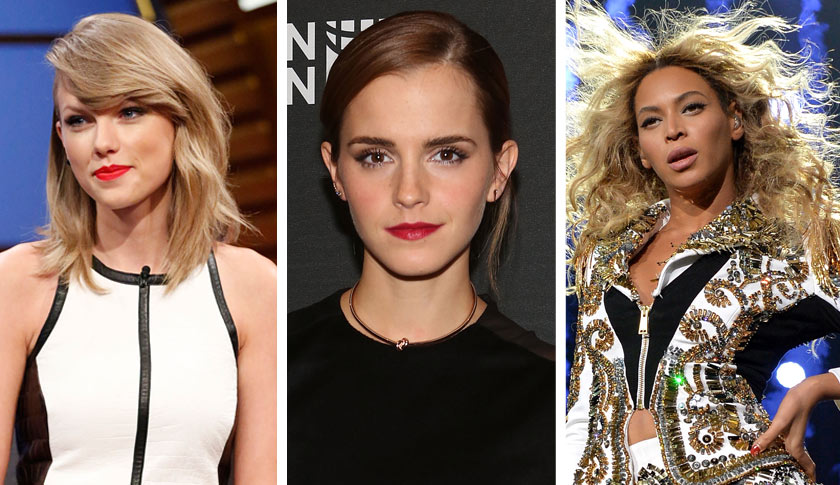 Bra-burning. Man-hating. Angry and unattractive. Such stereotypes have shadowed the women’s movement over the past few decades — and a slew of young, fashionable celebs are working to clarify feminism’s true definition.

Emma Watson, best known for playing Hermoine in the Harry Potter movie series, thrived in the face of adversity on the big screen, often providing the wisdom that helped her male cronies Harry and Ron stir up some much-needed courage. It seems Watson’s taken a page from her character: During her first big speech as a United Nations Women’s Goodwill Ambassador, she once again worked to inspire bravery in men. On Sunday, she announced the launch of the United Nations’ HeForShe campaign, which aims to get men involved in the global movement toward gender equality.

As Watson addressed the audience, she championed a new outlook for feminism. “I was appointed six months ago and the more I have spoken about feminism the more I have realized that fighting for women’s rights has too often become synonymous with man-hating,” she said. “If there is one thing I know for certain, it is that this has to stop. Feminism, by definition, is the belief that men and women should have equal rights and opportunities.”

Watson is the latest to join a growing group of young celebrities who not only identify as feminists, but are working to make the label socially acceptable and representative of a necessary movement. In August, singer-songwriter and teen-icon Taylor Swift, who had previously claimed she was not a feminist, said she recently realized that being pro-women doesn’t make you anti-man. That same month, global pop sensation Beyoncé Knowles performed at the VMAs in front of a huge white sign that said “Feminist.” Her most recent album, Beyoncé, also features snippets from a TedX speech on feminism given by Nigerian writer Chimamanda Ngozi Adichie.

The young stars’ feminist stances all seek to redefine the term after decades of unpopularity. World leaders like Hillary Clinton are also working toward the same goal. In June, the former Secretary of State said that she doesn’t believe there is “anything controversial” about being labeled a feminist. But pro-feminism messages from teen idols like Watson, Swift, and Knowles may reach a wider (and younger) audience. Feminism suffers from a reputation problem, say experts. With large social followings and huge fan bases, this trio just might make feminism cool again.

“In our celebrity focused culture, a young star like Emma Watson has the power to amplify important social messages,” says Katie Hood, a senior fellow at Duke University who teaches a “Women as Leaders” course and who recently became executive director of the anti-domestic violence One Love Foundation. “Having young celebrities and young voices can be a really compelling way to have young people change their futures.”

During the 1960s and ’70s, the women’s movement adopted an angry tone that turned many people off, says Janet Hanson. As a former Goldman Sachs VP and the founder of women’s networking group 85 Broads, which paired young women with established execs, Hanson’s been around both the old and new guard of female leaders. She says she watched the younger generation of leaders became confused about feminist principles — and men steered clear of joining the movement. “Women Against Feminism,” for example, tears apart the movement and cites countless reasons why feminism is bad. “The dictionary definition of feminism was hijacked,” says Hanson. “Feminism became synonymous with man-hating. The movement became bitter and cynical. It talked about what we don’t have as opposed to what we should have in an equal society.”

In the past men and women have repelled feminism for different reasons, says U.S. historian Estelle Freedman, who specializes in women’s history and feminist studies. Some men think that by supporting women, they will lose some of the rights and privileges that come with a single X-chromosome. On the other hand, some women fear that labeling themselves as feminists will make them unattractive to men. But Baby Boomers embraced the term — and imparted such principles on their kids.

“The parents of the Millennial generation grew up in a feminist world, whether they claimed the label or not,” says Freedman “Women brought in a substantial part of family income and aspirations for women’s educations changed… Now I think this current generation could be a breakthrough generation for feminism.”

Yet there are plenty of prominent women who continue to reject the feminist movement — like Yahoo (YHOO) CEO Marissa Mayer. In 2013, she described feminists as women who are “militant” and have a “chip on the shoulder.” At only 39, Mayer’s a young CEO in an industry dominated by men — and she’s become somewhat of a geek-is-chic role model for countless millennials. Her anti-feminism stance obviously contradicts her powerful position, but it also symbolizes the word’s negative connotation. (Some thought leaders have even suggested we should think about throwing out the term entirely.)

“We only know what we are taught,” says Hood, who notes that Mayer’s comments speak to a misunderstanding of feminism’s true definition. “[Watson’s] speech went a long way in redefining feminism as a quest for equality.”

That pro-feminist message that Watson and other social influencers (including actor Joseph Gordon-Levitt) continue to promote may help reshape how young men and women view the movement. The real challenge, though, will be to get that understanding of feminism to stick.

“Words can be very limiting,” says Hanson. “If no one bothers looking up the dictionary definition of feminism, than what it actually stands for is not what people think. The movement for gender equality needs new, young brilliant voices.” And, thanks to young stars like Watson, feminism may have found its new mascots.