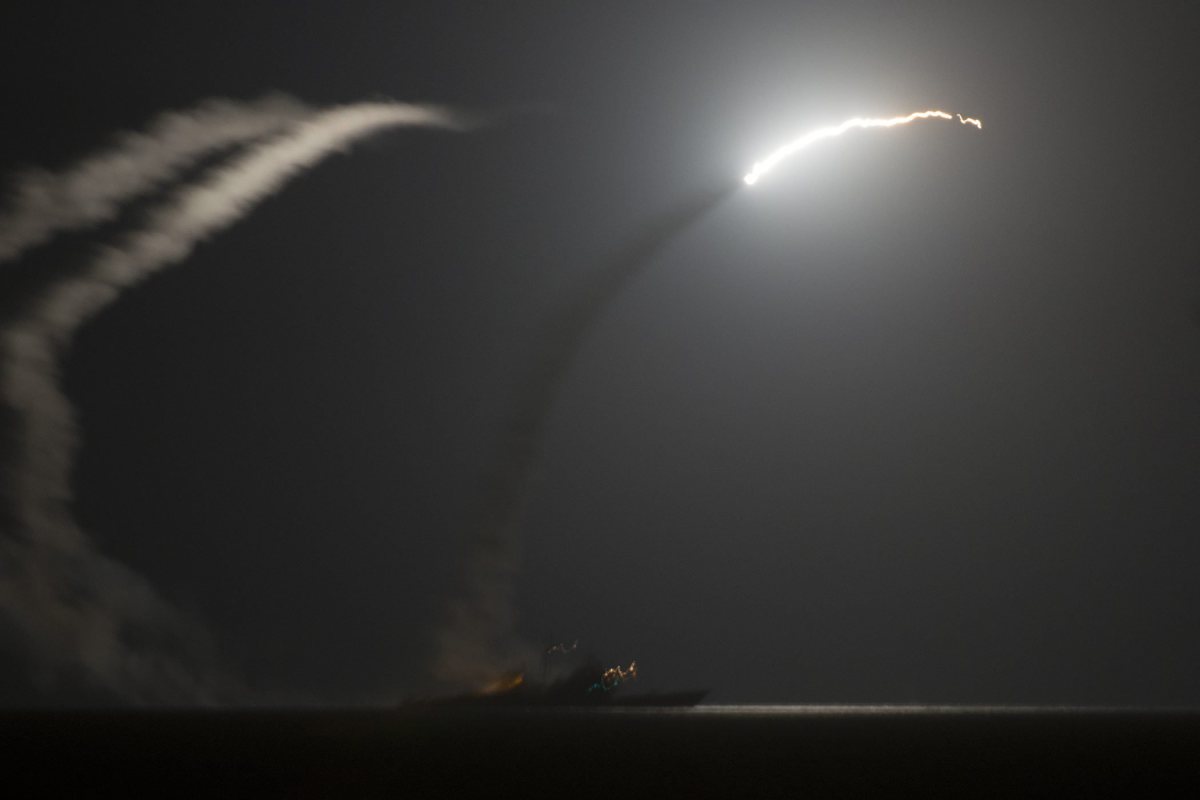 epa04412973 A handout picture released by the US Navy shows the guided-missile cruiser USS Philippine Sea (CG 58) launching a Tomahawk cruise missile against IS (Islamic State) targets in Syria, as seen from the aircraft carrier USS George H.W. Bush (CVN 77) in the Arabian Gulf, 23 September 2014. The United States and allied forces launched airstrikes against Islamic State militants in Syrian territory for the first time, the Pentagon said. The bombings were the first against Islamic State militants in Syria. The US had previously bombed Islamic State targets in Iraq, but said that it would pursue the group in Syria if necessary. EPA/ERIC GARST/US NAVY/HANDOUT HANDOUT EDITORIAL USE ONLY
ERIC GARST/US NAVY/HANDOUT EPA

U.S. and allied forces launched airstrikes against Islamist militants in Syria for the first time late Monday, the Pentagon confirmed.

The strikes, which were carried out early Tuesday morning local time, were aimed at key targets of the Islamic State of Iraq and Greater Syria (ISIS), including its base of operations in Raqqa, Syria, as well as a secretive al-Qaeda offshoot known as the Khorasan Group. “I can confirm that U.S. military and partner nation forces are undertaking military action against [ISIS] terrorists in Syria, using a mix of fighter, bomber and Tomahawk Land Attack Missiles,” Pentagon press secretary Rear Admiral John Kirby said in a statement on Monday night.

In an unprecedented move, the U.S. was accompanied by five Arab nations in the strikes, U.S. Central Command said in a statement: Bahrain, Jordan, Saudi Arabia, Qatar and the United Arab Emirates. Those nations all participated in, or supported, the strikes.

President Barack Obama authorized the military to begin a broad-based aerial campaign against ISIS forces in Iraq and Syria earlier this month, and is working to assemble a global coalition to combat the group, which has seized vast swaths of Iraqi and Syrian territory.

The strikes began the night before Obama was set to travel to New York City for a meeting of the U.N. General Assembly. A White House official said Obama is being updated on the operation.

The campaign in Syria follows more than 194 airstrikes carried out over the past two months against ISIS targets in Iraq, but only recently has the U.S. moved on the “offense” against the group.

“The United States conducted these strikes as part of the President’s comprehensive strategy to degrade and ultimately defeat ISIL,” CENTCOM said. “Going forward, the U.S. military will continue to conduct targeted airstrikes against ISIL in Syria and Iraq as local forces go on the offensive against this terrorist group.”

The strikes against Khorasan Group were unexpected, and involved only American assets. Senior government officials have raised alarm about the network of veteran al-Qaeda extremists plotting attacks on the U.S. from Syrian safe havens, but have been wary of even confirming the group’s existence until the past several weeks.

“The United States has also taken action to disrupt the imminent attack plotting against the United States and Western interests conducted by a network of seasoned al-Qa’ida veterans—sometimes referred to as the Khorasan Group—who have established a safe haven in Syria to develop external attacks, construct and test improvised explosive devices and recruit Westerners to conduct operations.” CENTCOM said in the statement. “In total, U.S. Central Command conducted eight strikes against Khorasan Group targets west of Aleppo to include training camps, an explosives and munitions production facility, a communication building and command and control facilities.”