Israeli Arab women: Stuck in economic purgatory, without a paddle 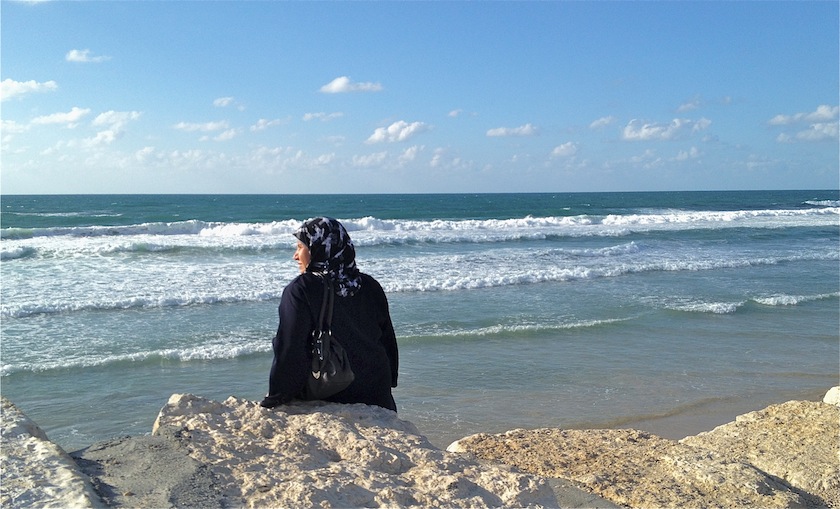 A beach in Tel Aviv
Photo by Amy Kaslow

Yara Mashour raises her voice to be heard over the call to prayer from a nearby mosque. The editor of Lilac, Israel’s popular Arab magazine, is just off deadline and she is taking a rare breather to explain her most controversial cover shot, a first for the Arab world: bikini-clad Huda Nakash, an Israeli Arab from Haifa who had just been crowned Miss Earth.

The voluptuous image was an offensive “pin-up” to some, and a welcome, if gutsy, depiction of change to others. Mashour, 41, contends it was designed to stun society into recognizing an Arab woman’s unabashed interest in determining her own course, be it as a world-class model or as a tech executive.

The message was not entirely understood. It drew and repelled millions of readers. But it certainly helped spark debate over the everyday challenges that Israeli Arab women face.

Advocates argue that until women enjoy equal economic status, their second-class position will be a drag on society. That argument resonates with Israel’s policymakers. Their primary concern: the soaring poverty rates and major employment obstacles for Israeli Arab women.

Among Israel’s 1.2 million Arab citizens, there are more females than ever moving through high school, learning to drive, attending universities, and joining the trailblazing ranks of female lawyers, doctors, tech workers, and CEOs.

The data that illustrates the less promising side of this story is overwhelming: paltry early education, a third of K-12 students who do not complete school, persistently low numbers of women matriculating in universities, stubborn under- and unemployment among women who have managed to secure college degrees, staggering 80% illiteracy rates among older women, the list goes on.

The image of the liberated female, free to pose on a magazine cover, simply doesn’t square with the experience of so many Israeli Arab women.

“One of Israel’s top priority employment policies is integrating Arab women into the workforce,” says a spokesman for the Prime Minister’s office. By 2020, the Israeli government aims to reach 42% employment for Arab women, compared to 27% today.

Mashour contends her hometown of Nazareth, Israel’s largest Arab city, has made progress. Raised in this northern Israeli Arab enclave, and schooled at a Christian women’s college in America’s deep south, Mashour later earned a masters degree from the London School of Economics. Since returning to Israel, Nazareth’s transition from a modest, sleepy burgh to one increasingly embracing change has become visible on the street. Fashion houses and female-owned businesses share space with male-dominated cafes and carpenter workshops. There appear to be as many chic women in fitted clothing as there are those covered in modest galabeyas.

Lilac’s bikini shoot started a conversation all over Israel about gender issues long-hidden or ignored. “There is no limit to the conversation now,” Mashour says, as she swats the air with the back of her hand. “We are a society that wants to be connected with the outer world.”

Lilac’s coverage ranges from sexual violence against women to how to climb the corporate ladder. What is progressive to some is audacious to others, and that includes Mashour’s own step into modernity. She recalls her mother and father’s determination to give their daughters a western education rather than rush them into marriage with suitable local boys, a decision that rocked her neighborhood and left her parents’ friends incredulous.

These are sensitive challenges for the National Council of Jewish Women (NCJW), as it counsels battered Arab Israeli women, confronts honor killing as a crime instead of ceding it to a cultural entitlement, and develops support networks for women rebuilding their lives after years of prostitution.

NCJW Director Shari Eshet asserts: “Arab women need more childcare facilities, battered women facilities, transportation to cities….” her voice trails off as she checks her calendar: an upcoming trip to the Negev to meet with Bedouin women about their economic wherewithal and prospects for employment and, later, a joint briefing from Israeli Arab and Jewish female candidates for municipal elections.

In supporting Arab Israeli women, the NGO community must confront the deeply entrenched practices of the traditional Arab household: women who may or may not brave physical and psychological barriers and whose fathers, brothers, and sons resist their efforts to work, appear in public, take mass transit to school, a job, or a community meeting.

Israeli society puts up obstacles, too. These include inadequate or non-existent educational opportunities, informal quotas at the country’s colleges and universities, biases against employing Arabs, and reduced pay for those who are hired (compared to their Israeli Jewish counterparts), limited access to transportation, and inadequate social services. Economy and Trade Minister Naftali Bennett readily concedes that Arab Israelis suffer from discrimination. “Let’s be honest, discrimination against Arabs exists in Israel,” he told a group of Israeli Jewish and Arab lawmakers, economists, activists and academics at the most recent Prime Minister’s Conference.

This summer’s military conflict in Gaza put Israeli Arabs in a “most awkward position,” laments Mashour, who says their combined wish is to enjoy equal rights and access as Israeli citizens and a viable two-state solution for Palestinians on the West Bank and in Gaza.

Remarkably, one of the most ardent advocates for the empowerment of Arab women has been Israel, where Arabs constitute 20% of the population and, given growth rates, could one day transform the Jewish state into a majority minority population. No wonder that the prospect of a larger, and poorer, Arab population within Israel is troubling to Israeli government leaders. It was the agenda at a recent Prime Minister’s Conference in Tel Aviv, trumping all other pressing issues of the day.

The two collaborators have quantified the barriers to Israeli Arabs. “Their limited participation in the labor market exacerbates their sense of alienation from Israeli social and political life” and compromises Israel’s economic growth, says Yashiv. If the lackluster Arab female participation rate stays constant or worsens, and the Arab population continues to grow, Israel can expect the impact to shave 1.3% off of its GDP growth. Aiman Saif, the Prime Minister’s Office longtime director of the Authority for the Economic Advancement of Minorities, puts the losses at around $11 billion a year.

Locally, there is recognition across the political spectrum and among the various ethnic and religious groups that Arab women need better education, specialized skills, access to information about the job market, and the means to travel to work.

Saif’s office has endorsed the government incentives provided to every Israeli plant that employs Arabs—subsidies that cover 25% of wages for two-and-a-half years. But so much more is needed, he concedes. He and others propose an array of solutions: creating employment centers in Arab towns and villages that offer job referrals and bus or van services; lowering the cost of taking a job by subsidizing childcare; developing high school curricula geared to both male and female students that highlight women’s rights and the importance of females in the workforce; building industrial parks in Arab-populated areas; and enforcing anti-discrimination legislation.

The most acute problems are in Arab East Jerusalem, where the Israeli-Palestinian conflict, present throughout the country, is dominant. Since it seized the area from Jordan in 1967, Israel has pushed back hard on Palestinian demands to designate East Jerusalem as their capital. With the war in Gaza, Arab residents have become more brazen in their reaction to settler violence and opposition to Israeli rule; almost daily, there are skirmishes with Israeli police and soldiers, who have redoubled their efforts to restrain Arab rock throwers, looters, protesters, and rioters.

Along one of the winding alleyways of shops catering to local consumers, a merchant selling clothing, kitchen supplies, sundries, and toys prominently displays rifles dangling from an iron door. The collection of life-size guns, with scopes, is a standout along the shop’s exterior wall of Jerusalem stone. Promotional packaging depicts 5-year-old females in headscarves: the toy guns are marketed to the youngest girls. It is a provocative visual in a place where passions and prejudices run deep, and where the prospect of violence keeps everyone on alert.

Is it so far-fetched that young Arab girls might see violence as the answer? According to the Israeli National Insurance Institute, almost 80% of East Jerusalem residents and 85% of children live below the poverty line. A stunning number, it is the worst in recorded history for the area. Welfare services identified 7,748 boys and girls at risk in 2012. The public school system is 1,000 classrooms short, and only 46% of students attend official municipal schools, according to the Association for Civil Rights in Israel (ACRI). The Jerusalem Education Administration calculates that the dropout rate for 12th graders is 40%.

Like so many of the NGOs active on the ground, ACRI is an elixir to some and an agitator to others. The Association pushes the Israeli High Court to honor Israeli Arab rights to an education, and puts pressure on Jerusalem and national authorities to remedy overcrowding, hygiene, and safety problems in existing schools and to build classrooms to accommodate the many Arab youth that do not attend school.

Paving a way to education, jobs

Sami Saadi is the Arab co-founder of Tsofen High-Technology Centers. He launched the organization with Smadar Neha, an Israeli Jewish tech entrepreneur, to help build a stronger Arab presence in Israel’s industrial workforce. Saadi calls the limited integration of Arabs in Israel’s robust high-tech sector (they hold roughly 1,200 out of the 85,000 jobs) “a major market failure.” With some 1,500 qualified Israeli Arab engineers out of work, and more than double the number of technology jobs going unfilled, Israeli industrial output is suffering, he says. High-tech exports account for 40% of Israel’s gross national product.

Among Tsofen’s headhunters-trainers is 28-year-old technologist Amanie Brik, an Arab Israeli from Abu Snan, a small Druse village close to Acco. She works for Tsofen in Northern Israel, but like all local recruiters, she cuts a broader swath, searching nationwide. Arabs and Jews are on separate footing, Brik says. “Arab students start their job search when they are 19 years old. They don’t know how to answer questions, what they should say, and what they shouldn’t. Jewish students start their studies after army. They already have experience. They learned it in the military. They have a network from the high tech industry and they have a network from the military. They received technical training from the military.”

Brik also teaches job prep skills, from resume writing and interviewing to self-advocacy. The latter can be a particular culture shock for Arab women who are taught modesty and to avoid calling attention to themselves.

The biggest deficits are in education, the critical determinant of work-readiness. Israeli Arab performance on educational achievement tests, national and international, is relatively poor compared to their Israeli Jewish counterparts. Their high school dropout rates are double that of the Jewish students, and their share of seats in Israel’s college and university classrooms is just shy of 11%.

Sheer population growth may serve as the strongest catalyst for change. As the Arab Israeli market increasingly becomes a major frontier for the Israeli economy, the country’s top business, investment, and advertising executives need to understand the Arab consumer, Mashour says.

Israeli Arab women stand the most to gain. “My work becomes educating the Jewish sector about all of this,” Mashour says. “They see the buying power of the Arabic sector. I’m not just editing items. I’m editing minds, and how they think.

“People in Tel Aviv have just as much a need to know about people in Nazareth as we do about Tel Aviv. We’re Israelis.”