Scotland votes to stay in the U.K. 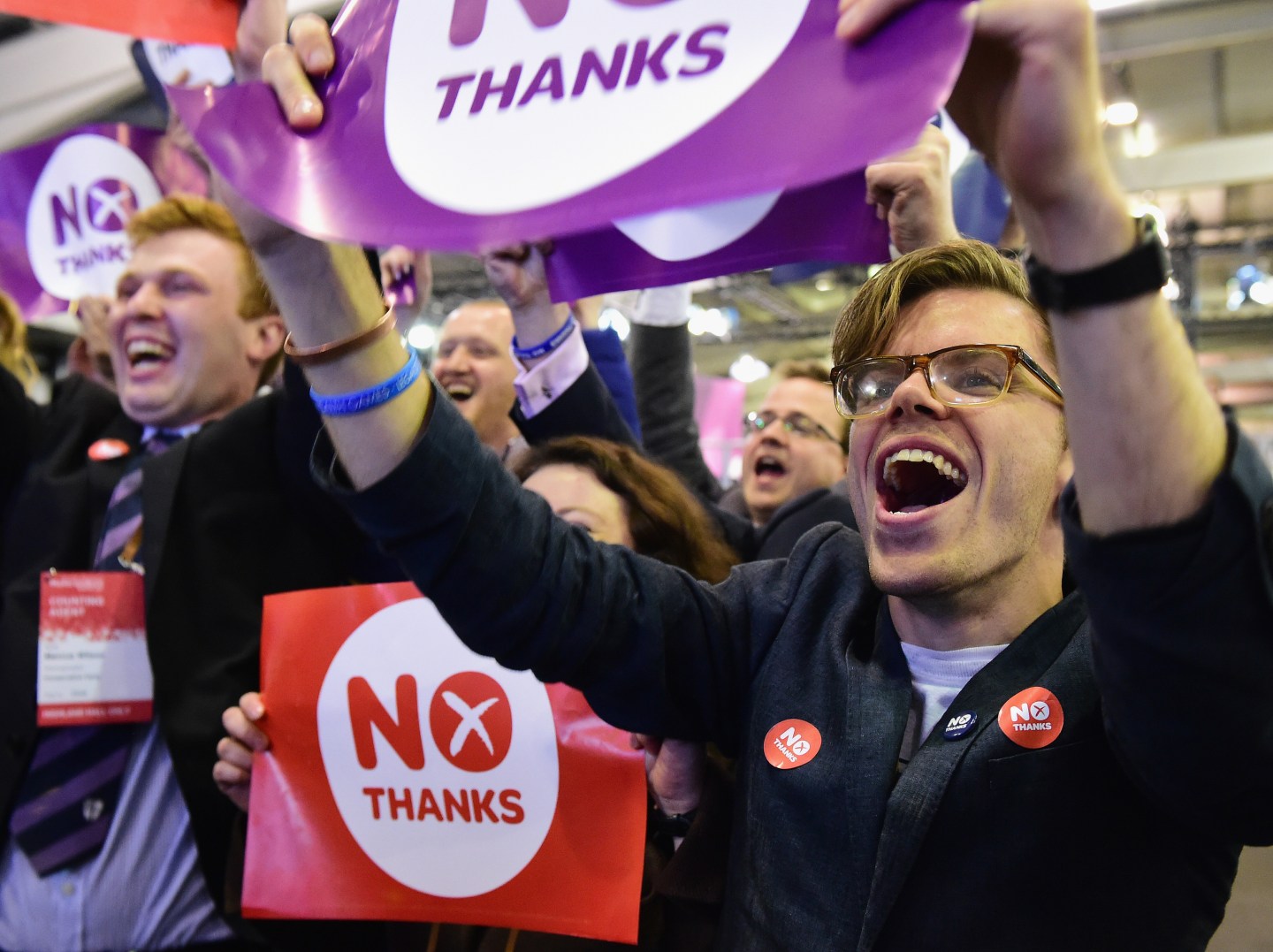 EDINBURGH, SCOTLAND - SEPTEMBER 19: 'Better Together' supporters celebrate the result of the Scottish referendum on independence at the count centre for the Scottish referendum at Ingleston Hall on September 19, 2014 in Edinburgh, Scotland. The majority of Scottish people have today voted No in the referendum and Scotland will remain within the historic union of countries that make up the United Kingdom. (Photo by Jeff J Mitchell/Getty Images)
Photo by Jeff J Mitchell—Getty Images

Scotland rejected independence in Friday’s referendum count, with around 55% of voters choosing to stay within the U.K. The 307-year-strong union has survived, although increased powers will be devolved to the nation.

Scottish First Minister Alex Salmond, who spearheaded the Yes campaign, conceded defeat at around 6:17 a.m. local time. “On behalf of the Scottish government I accept the result and pledge to work constructively in the interests of Scotland and the rest of the United Kingdom,” he said.

“The process by which we have made our decision as a nation reflects enormous credit upon Scotland. A turnout of 86% is one of the highest in the democratic world for any election or referendum in history — this has been a triumph for the democratic process and participation in politics.”

Despite a hard-fought campaign, only four of the 32 local authority districts voted for independence, including populous Glasgow, although even in this key constituency the margin was not particularly large, in a devastating blow to the Yes camp.

The final bell tolled for secession advocates after Edinburgh voted to maintain ties with the south by 61%.

“I am delighted,” said British Prime Minister David Cameron, hinting that more devolved powers would also be rolled out to other British regions. “It would have broken my heart to see the United Kingdom come to the end.”

Alistair Darling, the former Chancellor of the Exchequer who led the No campaign, admitted that the closeness of the result was a wake-up call.

“Today is a momentous today for Scotland and the United Kingdom as a whole,” he said. “While confirming our place within the union, we have confirmed the bonds that tie us together — may they never be broken.”

Pubs across the country were staying open throughout the night with customers both anxious and excited to see whether the historic union would be consigned to the history books.

Greg Waddell, a doctor working in Glasgow, told TIME that he voted Yes “because disempowerment breeds dependency; because the current extent of social inequality in Scotland demeans every one of its people.”

Others among the 4.2 million registered voters were less optimistic about prospects for going it alone. Nick Allan, an oil executive from Aberdeen, said the Yes campaign promises were enticing, but he voted No as it would be impossible to pay for them — especially not with North Sea oil.

“The problem comes down to money,” he says. “How on God’s earth are you going to be able to afford all of these improvements? The country will be bankrupt in a matter of years.”

Many questions regarding what a truly independent Scotland would look like remained unanswered, including over currency, health care, defense and E.U. membership. Spain’s Prime Minister was one of several European leaders who said he would not support Scotland’s application to the bloc, as the Iberian nation was unwilling to fan separatist campaigns of its own.

These fears were echoed by Professor Michael Desch, an expert on foreign policy at the Notre Dame University.

“Ironically, a peaceful Scottish secession from the United Kingdom could open Pandora’s Box by raising unrealistic expectations about the ease of parting long-established national ways,” he said.

The vote captivated social media. Over the past 24 hours, 1.3 million people on Facebook made 3.3 million interactions regarding the Scottish referendum debate.