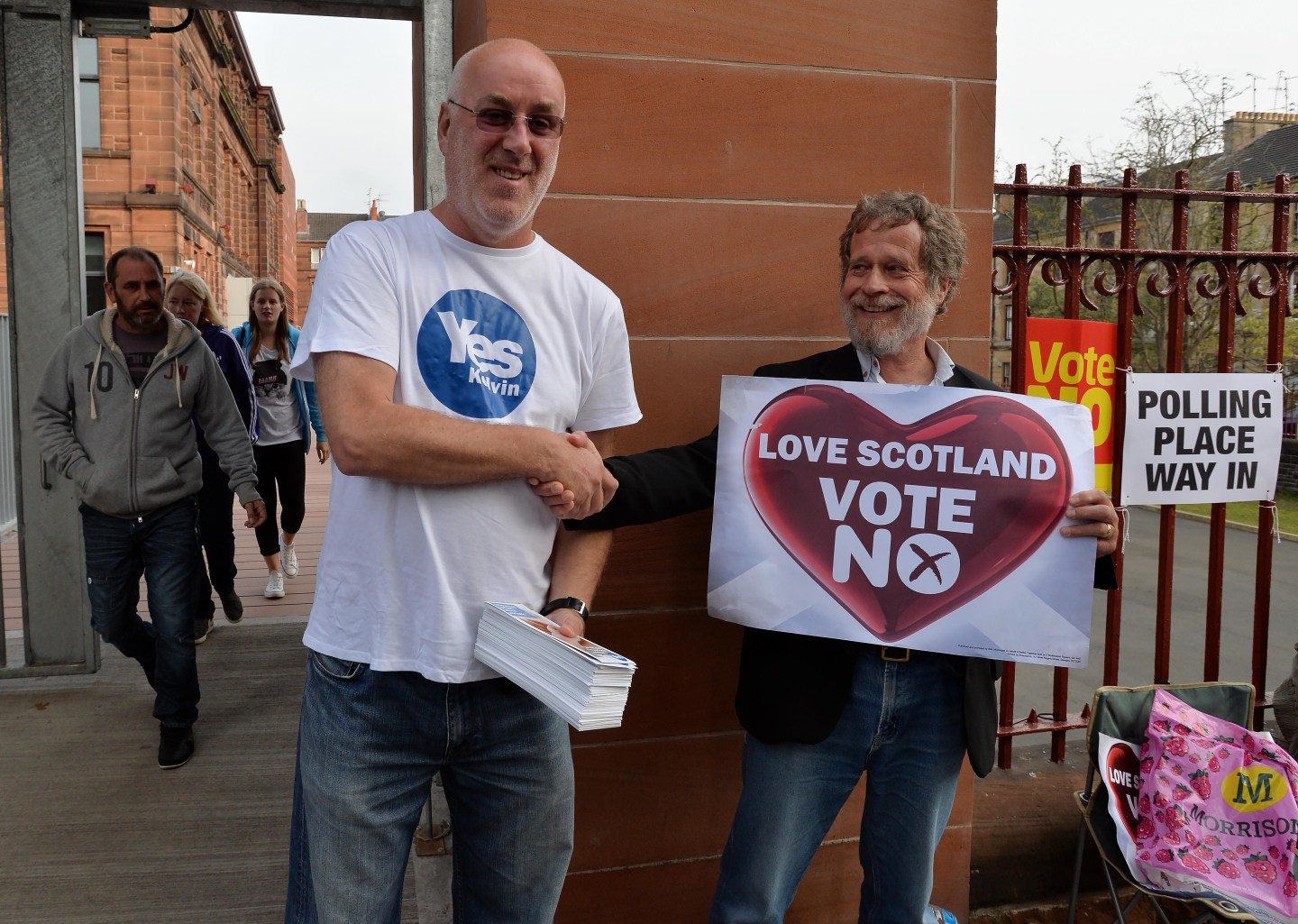 GLASGOW, SCOTLAND - SEPTEMBER 18: Rival campaigners shake hands outside Notre Dame Primary School polling station as the people of Scotland take to the poles to decide their country's fate in a historic vote on September 18, 2014 in Glasgow, Scotland. After many months of campaigning the people of Scotland today head to the polls to decide the fate of their country. The referendum is too close to call but a 'Yes' vote would see the break-up of the United Kingdom and Scotland would stand as an independent country for the first time since the formation of the Union. (Photo by Mark Runnacles/Getty Images)
Photo by Mark Runnacles—Getty Images

Today is the day. All of the posturing, the athlete opinions and, of course, the Braveheart jokes, can finally end, as Scotland’s residents go to the polls to vote on whether or not to remain a part of the United Kingdom.

Though the results likely won’t be announced until around breakfast time in the U.K. Friday (sometime in the early hours on the east coast of the U.S.), there are a lot of signs pointing towards a preservation of the union.

Paddy Power, an online betting site based in Dublin, Ireland, is offering odds that make it clear a No vote is the most likely. The odds for those betting that Scotland will choose independence are 7/2, meaning that if you bet $1 you’ll make a $3.50 dollar profit if you’re right. Those betting No, though, are seeing 2/11 odds, meaning that for every $1 you bet you only see a profit of $0.18.

Perhaps even more interesting is the over/under. For those wanting to bet an over/under on the total percentage of Yes votes, the number sits at 46.5%. That suggests a No campaign lead of 7 points — quite a gap for Yes supporters to make up.

A spokeswoman for Paddy Power said that leading up to today, the bets were about 75/25 in favor of No, while Yes bets had picked up a bit of steam today, with bets at closer to 65/35 for No.

Clearly, people in the U.K. and worldwide are looking to make money off of the vote. The referendum is the largest non-sports betting event in the site’s history, with a payout of more than 1 million pounds likely.

In addition to straight bets on whether or not the vote will be Yes or No, and what the percentages can be, there are a number of smaller bets people can also make. This includes betting on what percentage of people in the four biggest Scottish cities — Glasgow, Edinburgh, Dundee and Aberdeen — will vote Yes. You can also vote which local area will have the biggest Yes vote percentage, and even a bet that might not pay off for more than a decade — 4/1 odds on whether or not Scotland will become an independent member of the EU by 2025.

Why should we listen to betting websites? The thinking among economists is they’re more accurate than opinion polls. Voters don’t have any incentive to tell pollsters the truth about their voting plans, but when they are betting their own money they will tend to make informed choices based on the best information available to them.

More traditional indicators are also pointing to a No vote, including the the currency market.

The stock market also showed optimism for those on the No side: The benchmark FTSE 100 index in London finished up slightly. If the polls prior to the election were showing a better chance of the union being severed, both the currency markets and the exchange would likely be down.

If, though, all the signs turn out to be wrong, and Scotland does indeed choose to leave the U.K., look for serious damage tomorrow. The pound would likely plummet, and market reaction could be grim.