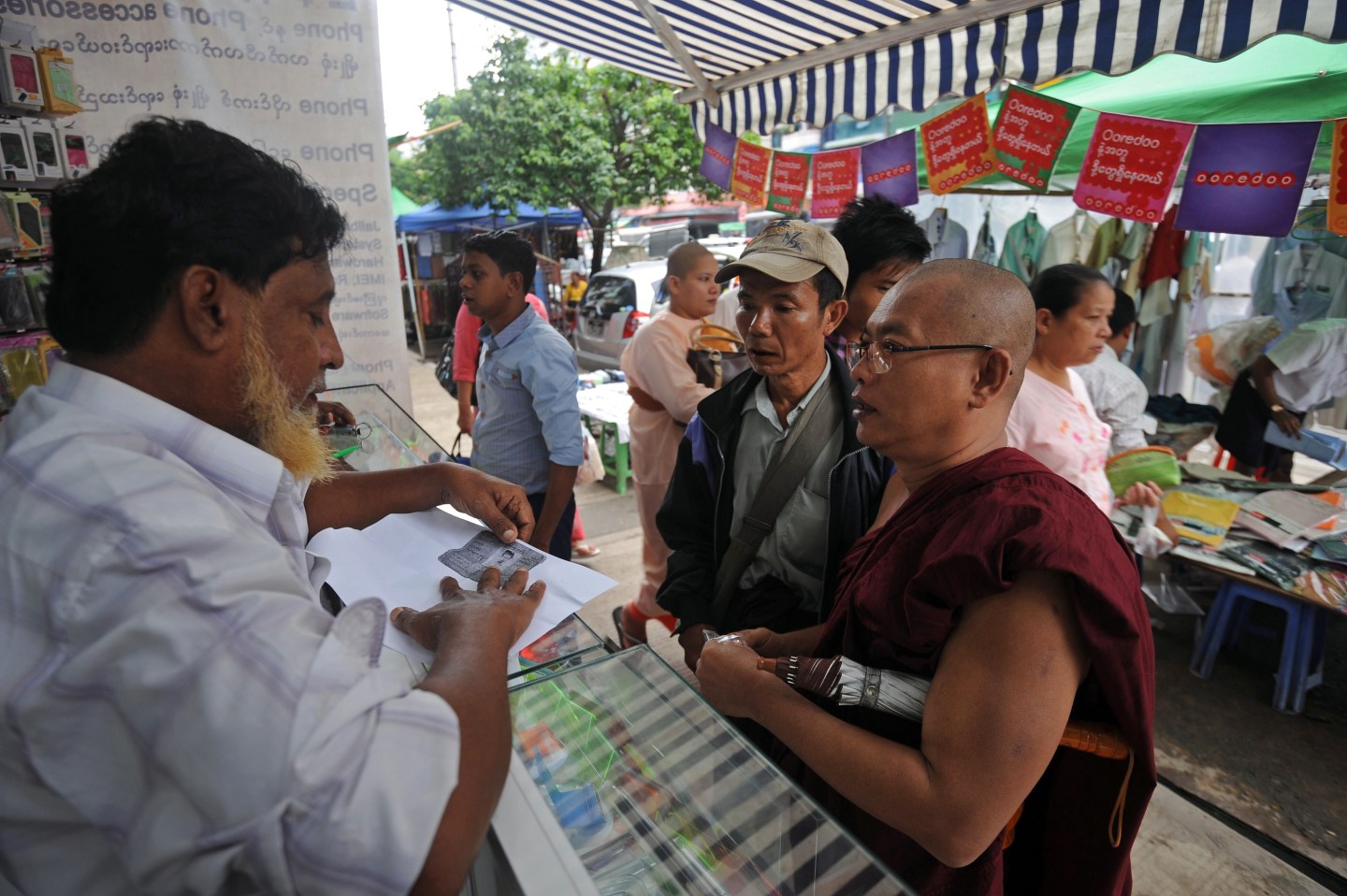 Myanmar is somewhat of a technology backwater when it comes to wireless telecommunications services. Just 12.3 percent of the population has access to a basic mobile phone. The isolated southeast Asian country, which is also known as Burma and was for decades under military rule, has the region’s least-developed telecommunications infrastructure.

That may soon change. Billions of dollars in foreign investment have begun to pour into Myanmar, igniting what some people predict to be the world’s fastest-ever deployment of mobile services. Ooredoo, a Doha, Qatar-based wireless carrier with operations in long list of politically turbulent countries such as Tunisia, Algeria, Palestine, and Iraq, has been granted an operating license and plans to invest $15 billion in Myanmar. Norway’s Telenor Group, one of the world’s biggest mobile companies with operations in Scandinavia, Eastern Europe, and Asia (such as Thailand and Bangladesh), has also been granted a telecommunications license in the country.

“There’s little doubt that Ooredoo and Telenor have the resources and support to drive the infrastructure development and increased bandwidth,” says Jarit Sidhu, an analyst with the market research firm IDC. “But it will likely be mid-2015 before we see significant activity. It will take time to iron out things like land allocation for base station expansion, SIM card provisioning, and the construction of the towers themselves.”

London-based consultancy Ovum predicts the number of new mobile subscribers in Myanmar will grow at a compounded annual rate of nearly 30 percent to reach 32.3 million people by the end of 2019. The population of the country is about 60 million.

Myanmar’s quasi-civilian government has ambitious economic plans and presides over infrastructure that lags behind its regional peers. After years of dictatorship and mismanagement, the new government found that it could not make the infrastructure investments it deemed necessary without foreign capital and know-how. For this reason, it sought to put an end to the monopoly of state-owned wireless operator Myanmar Posts and Telecommunications, or MPT. By inviting competition in the country’s telecommunications sector, Myanmar’s government wants to move the country into the 21st century.

(For a sense of how bad things were when MPT was the country’s only operator, SIM cards—the microchips wireless devices use to authenticate network subscribers on mobile devices—sold for as much as $4,500 on the black market. The average annual income in Myanmar is less than $200.)

“For foreign direct investment and other foundational investments to happen, a good communications network is a must,” says Clement Teo, an analyst with Forrester Research in Singapore. “Wireless is one of the fastest ways to connect up the country.”

Vivek Roy, an Ovum analyst, added: “A properly functioning telecoms network will spur innovation in other critical industries, such as education, healthcare and finance, and contribute to overall socio-economic development.”

The challenge is daunting. Qatar’s Ooredoo and Norway’s Telenor seek to create a modern 3G network in Myanmar that reaches 90 percent of the population, including rural villages, in five years. The effort comes with significant risk.

“If political issues continue to overshadow the deployment of base stations there will be no network for anyone,” IDC’s Sidhu says. “Beneath the glimmering surface where foreign companies are being welcomed, there are still politics going on. Disputes over contract awards and land allocation have been somewhat hindering progress.”

A local skills shortage will also be a major hurdle to overcome. Still, the most pressing issue is fairly obvious: profitability. It may take as long as 10 years for Myanmar to start making money for its telecom investors. Fortunately Ooredoo and Telenor have deep pockets and plenty of experience doing business in politically tricky countries.

Will Myanmar be the next Thailand or Malaysia, both highly lucrative wireless markets? Nearly everyone involved is banking on it.

Correction, September 23, 2014: An earlier version of this article misstated the location of the headquarters of Ooredoo. It is Doha, Qatar, not Kuwait City, Kuwait. Additionally, the earlier version incorrectly stated that the company has operations in Bosnia and Herzegovina.