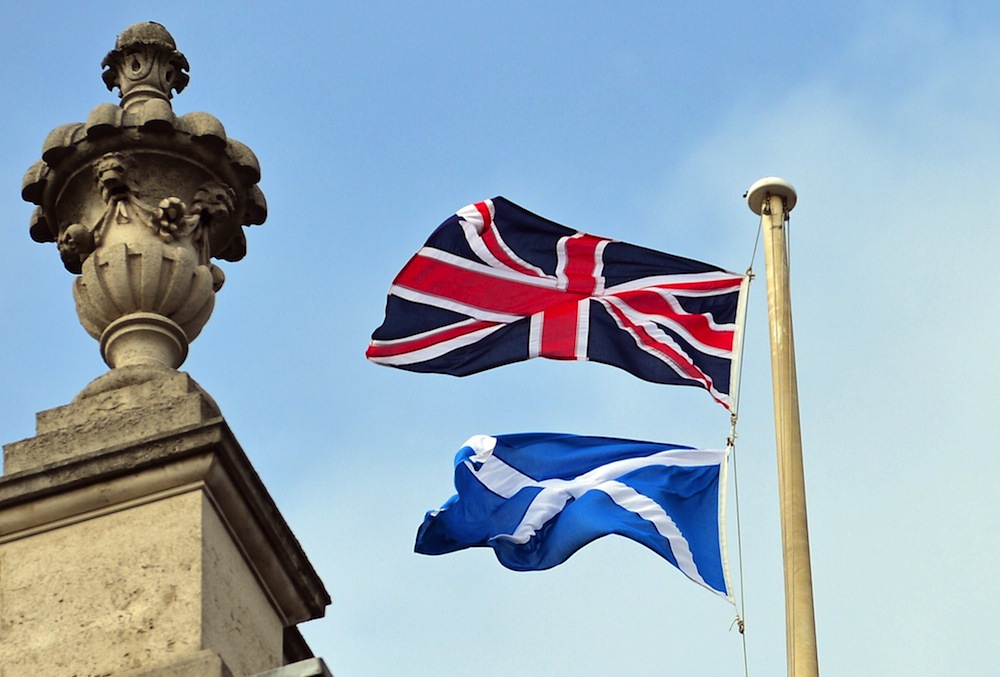 The Union Flag and Saltire, the national flag of Scotland, are flown above the Treasury building in central London on September 17, 2014, ahead of the referendum on Scotland's independence. Campaigners for and against Scottish independence scrambled for votes on Wednesday on the eve of a knife-edge referendum that will either see Scotland break away from the United Kingdom or gain sweeping new powers with greater autonomy. AFP PHOTO / CARL COURT (Photo credit should read CARL COURT/AFP/Getty Images)
Carl Court—AFP/Getty Images

Will an independent Scotland suffer a total and irreparable economic meltdown if voters choose to break from the United Kingdom on Thursday?

U.K. loyalists, the City of London, and the most of the British media seem to think so. They believe that an independent Scotland would struggle to turn itself into a viable economy and it would be saddled under enormous amount of debt if it were to go it alone.

While leaving the United Kingdom might hurt Scotland economically at the outset, it will probably end up just fine on its own, thanks in large part to its educated population and vast energy reserves. In fact, it isn’t the Scots who should be worried here—it’s the U.K.

The following are a few of the major economic concerns that have been keeping investors and U.K. loyalists up at night if Scotland chooses independence.

1. The U.K.’s net import dependency for fossil fuels would shoot up from 47% to 95% as an independent Scotland gains control over the vast majority of the U.K.’s oil and natural gas reserves in the North Sea. This could cause energy prices across the U.K. to shoot up overnight as energy traders turn bullish and bid up future prices. While there may not be any material impact on supply, the market reaction could have a long-lasting and devastating effect on prices for some time as forward prices remain elevated. Higher energy prices would result in a decrease in disposable income, especially for the U.K.’s struggling middle class. This would hurt Britain’s service sector, possibly plunging the country back into recession.

2. Scotland could refuse to take on its share of the U.K. national debt. This scenario would raise the ratio of the U.K.’s national debt to GDP from 88% to 99%. U.K. sovereign debt rates would almost certainly shoot up as investors would require higher yields to compensate for the increase in credit risk. The extra debt servicing costs would further eat into the U.K.’s ravaged income statement, forcing it to either take on more debt or make painful cuts in services.

3. The loss of North Sea crude oil would cut significantly into the U.K.’s total exports. Crude and refined petroleum makes up 12.5% of the U.K.’s exports. Scotland stands to gain 98% of the U.K.’s crude oil, reducing the U.K.’s overall exports from $813.2 billion to $713 billion. These figures don’t include Scottish imports of U.K. goods, which could help to balance the numbers.

4. Chances are, U.K. exports to Scotland won’t be enough to make up for the loss of all that Scottish oil. The resultant expansion in the U.K. trade deficit, along with the increase in Britain’s credit risk profile, could cause the pound to lose significant value. The pound’s exchange rate to the U.S. dollar fell from $1.72 to $1.61 last week on fears of a Scottish exit. If Scotland gains independence, Nomura analysts estimate the pound could fall an additional 15%, putting the dollar exchange rate at its lowest level in 10 years, at around at $1.37.

5. The weaker pound would hurt the U.K.’s international purchasing power, forcing it to slash imports, lowering the standard of living for those left in Britain. The U.K. imported $783 billion in 2013, equal to around 28% of its GDP. A further 15% fall in the value of the pound would force the U.K. to spend $921 billion to import the same quantity of goods, making total imports equal to 33% of GDP.

6. The balance of trade could spiral out of control, sending shock waves through many parts of Britain’s economy. With exports reduced to $713 billion and imports increased to $875 billion, taking into account higher oil imports, the U.K. trade deficit would expand to $155 billion, further debasing the pound. The weakened pound would put additional strain on the (half) island nation’s ability to import goods, further lowering the U.K.’s standard of living. The one positive here is that the weakened pound would make the U.K.’s exports more attractive to foreign buyers. But there is no guarantee that U.K. exports could expand enough to fill the hole left by the loss of its considerable energy exports.

7. Depreciation of the pound combined with a growing trade deficit from greater dependency on foreign oil would lead to significant inflation, raising the cost of living and eroding real British wealth. Savings would take a hit, which could cause Britons to take their money out of sterling and convert it into a more “stable” currency, such as the dollar or the euro. This would further debase the pound and cause a major flight of capital that could destabilize British banks. Financial system instability might require government intervention to shore up depleted capital reserves. Currency controls would need to be implemented to keep the pound from falling, further eroding confidence in the currency.

8. All of this economic instability isn’t good for the City of London. Investors pulled 16.6 billion pounds ($24 billion) out of the U.K. last week, the largest such decrease in assets since the start of the 2008 financial crisis. Any additional decrease would be devastating to the city as it could set off a panic in the markets and a widespread withdrawal of capital across many asset classes. If investors kept their money out of the City for long enough, the financial industry would be forced to shrink, meaning mass layoffs. This would deliver a major blow to London’s economy, as it counts on the salaries of financial service professionals to keep it going.