A President in prime-time command after 2 years of frustration 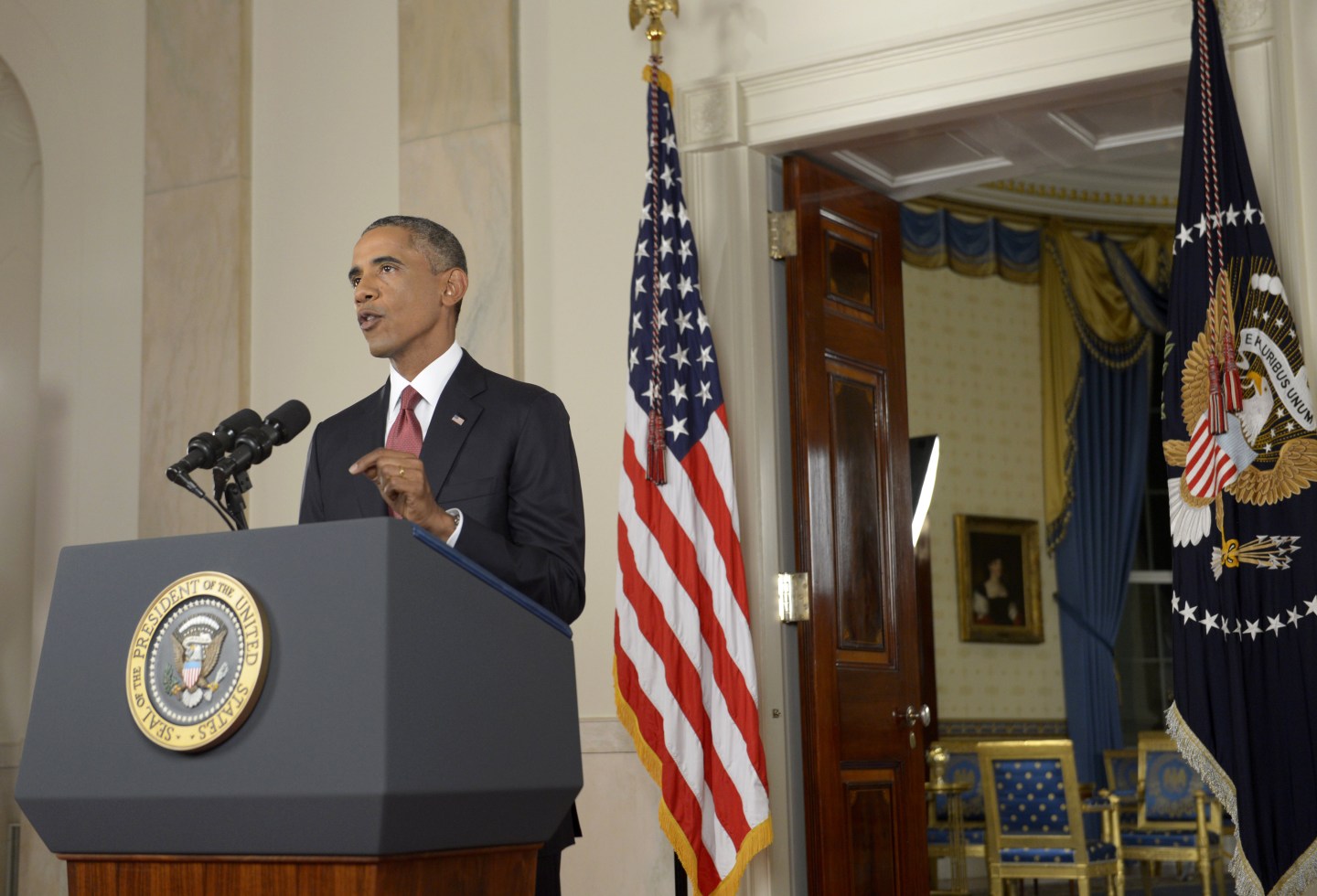 (TIME)–The central message of Wednesday night’s prime-time reveal of a new U.S. war in the Middle East came a few minutes in. President Barack Obama squared to the camera, slowed his delivery and filled each syllable with the all the gravity he had. “I know many Americans are concerned about these threats,” he said, pausing briefly between sentences. “Tonight, I want you to know that the United States of America is meeting them with strength and resolve.”

That was the takeaway, the thing he wanted his country to remember after the 15-minute interruption of the America’s Got Talentended: I got this. Americans may be getting their throats cut in distant deserts. Iraq may again be falling into tribal chaos. Islamist extremism may be rearing its head under a new black flag. But the situation is under control.

If he delivered the sentiment with remarkable presence of mind, it may only be because he hasn’t had many other opportunities over the past two years. Wars are presidential acts in the American system, whatever Article I, Section 8 of the U.S. Constitution says. He chooses the bombs to drop, and where they hit. He makes the phone calls to get other countries on board. He reviews the intelligence on the homeland threat each day, weighing the risks of spilled blood at home and abroad.

War is also one of the last things of import he has control over in his second term. Just a few days earlier, he found himself in another room of the White House trying to explain to NBC’s Chuck Todd why Americans should care if Democrats keep the Senate in November, given all the evident powerlessness of anyone to do anything in Washington. The best he could come up with was that Democrats would have a better rhetorical position. “Having a Democratic Senate … means that we are debating the right things for the country,” he managed.

In other words, the status quo, a situation so untenable that his communications shop made his escape from it a selling point. “The bear is loose,” White House aides would tweet, when he walked down the street, bought ice cream or a hamburger on some Midwestern Main Street. The Oval Office, in other words, is a cage. His attempts to deal with gun violence had fallen flat after the Sandy Hook Elementary School shooting. His bipartisan dinners to craft tax reform and deficit reduction had been cleared away. His signature legislative achievement had almost come crashing down with a website. Even his bold plan to take unilateral action this summer on the immigration crisis got waylaid by polls showing voters on the brink of outrage.

But this problem in Iraq and Syria, a few thousand jihadists belonging to a group with a name that no one can agree on — that was something he could handle. “Tonight, with a new Iraqi government in place, and following consultations with allies abroad and Congress at home, I can announce that America will lead a broad coalition to roll back this terrorist threat,” he said.

It was a good moment for his presidency. But it was also the easy part. Polls show Americans favor intervention by about the same margin that they opposed bombing Syria last year. Chances are good the U.S. will win the military fight, and the spooks seem optimistic at the moment about preventing another homeland attack in retribution. But there will also be a cost.

Another goal of his second term was to wind down the eternal conflict his predecessor called the “war on terror.” Now that won’t happen anytime soon. The war against the Islamic State of Iraq and Greater Syria, which Obama described as neither Islamic nor a state, will be a long one. As with past painful conflicts, there is no end date, and no clear metric on which to declare victory. He said he will “degrade and ultimately destroy” the threat. But the destroy part could very well come years after he leaves office.

For now, however, everything is under control. The nation that can’t agree on anything is taking definitive action. “As Americans, we welcome our responsibility to lead,” Obama said Wednesday night.

The same can be said for the President who leads us.