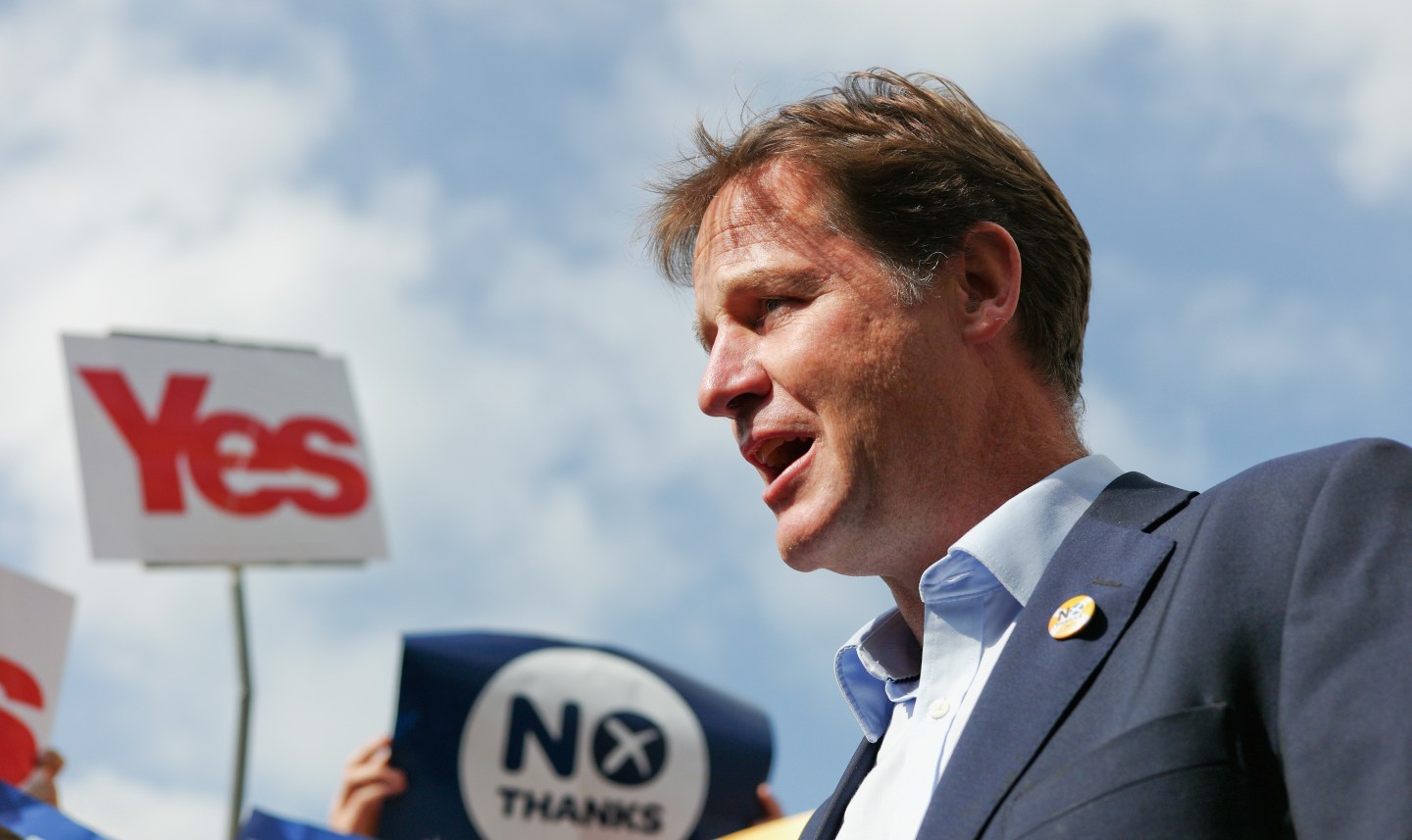 SELKIRK, SCOTLAND - SEPTEMBER 10: Liberal Democrat Deputy Prime Minister Nick Clegg talks to members of the media during a campaign visit to the market place in Selkirk to make a case for Scotland remaining in the United Kingdom on September 10, 2014 in Selkirk, Scotland. The three UK party leaders are all campaigning in Scotland today showing their support for a "No" vote in the independence referendum. (Photo by Ian Forsyth/Getty Images)
Photo by Ian Forsyth—Getty Images

Scotland’s independence referendum is still eight days away, but the postmortem has already begun over why British officials have come within a whisker of seeing the United Kingdom collapse, as investors and officials in London reel from the prospect of having the E.U.’s third biggest economy thrown into upheaval.

Months of relative calm within Prime Minister David Cameron’s government over the vote erupted in shock on Saturday, when YouGov released a poll predicting that the ‘yes’ pro-independence side could win the September 18 referendum by 51% to 49%. After months of the yes side lagging behind by as much as 20%, it was first time an independent Scotland has seemed a real possibility. On Monday the British pound sank to its lowest level against the dollar and euro in 10 months. Spooked business executives who have largely remained out of the fray finally broke their silence, urging Scots not to leave the U.K. BP’s CEO Bob Dudley said in a statement on Wednesday that revenues from Scotland’s North Sea oil—on which an independent Scotland would heavily depend—would be increasingly difficult to earn, as once-rich fields mature. “Long-term investments require fiscal stability and certainty,” he said, adding that Scotland’s 300-year-old union with Britain provides the business environment major players like BP (BP) need to plow billions into maintaining diminishing fields. In an attempt to bolster the ‘no’ vote, Cameron and his coalition partner, Liberal Democrat leader Nick Clegg, as well as opposition leader Ed Miliband, all flew to Scotland on Wednesday to plead with Scots to stay in the U.K., with Cameron telling Scots in Edinburgh that he would be “heartbroken” if they left.

But leaving aside those fraught emotions and the warnings of financial doom, some believe the pro-independence side has soared in support, in some measure thanks to Britain’s tactical errors and misguided strategies.

The Scottish Nationalist Party won control of Scotland’s parliament in elections in 2012 on a promise of holding a referendum on whether to ditch Britain, sparking a groundswell of support for the idea. Still, it was unclear whether the U.K. Constitution allowed Scotland to declare independence. “The lawyers disagreed about whether they could,” says John Curtice, politics professor at the University of Strathclyde in Glasgow. “In the end the issue was not tested, and Britain allowed the ambiguity.” Voters will be given only one choice on September 18th—whether or not to leave Britain—rather than a middle-ground of greater autonomy, in part because that question relied on approval for London. In addition, the chance of Scots voting to dump the U.K. seemed unlikely back in 2012, and Britain wanted a referendum to end the independence threat once and for all. “The idea was to remove the sword of Damocles of the threat that was hanging over Britain,” Curtice says.

Analysts say British officials have struggled to make a compelling case to Scots about why they should stick with the U.K., relying on warnings about dire financial consequences of ditching Britain and going it alone. Those include the prospect that it could take years before independent Scotland becomes a full-fledged member of the E.U., which pro-independence nationalists have said they would like. Cameron has warned Scots that Britain would not agree to an independent Scotland using the British pound as its currency, but many Scots do not believe Britain would dare follow through on that threat, since it would cause deep economic disarray.

Cameron has also appealed to the Scots’ sense of centuries-old ties; in Edinburgh on Wednesday he called the country “this United Kingdom that we have built together.” Yet that is not necessarily a winning argument in Scotland, where one of the most revered figures is the 13th-century fighter William Wallace, who led Scottish resistance to English attempts at conquest. “Cameron tends to make an emotional case about why it [the United Kingdom] is good for England,” Curtice says. “But he’s not so good on why Scotland should want to be part of England.”

Complicating the message, too, has been the choice of which politicians to deliver it. One Cameron aide told the Financial Times anonymously last December that Alistair Darling, a veteran British politician, a Scot who has been in charge of the ‘no’ campaign on behalf of Britain, was “comatose much of the time” and had no experience in running a campaign. The ruling Conservative Party, which has very little support among Scots, only recently sought help from one of Cameron’s bitterest political foes, the former Prime Minister Gordon Brown, against whom he fought a gloves-off election battle in 2010, to pump the message for the U.K. on the streets of his native Scotland.

For months Britain’s three major political leaders, Cameron, his coalition partner Liberal-Democratic leader Nick Clegg and the opposition Labor Party leader Ed Miliband, have offered no coherent alternative vision of the future for Scots if they voted to remain in the U.K. That’s largely because of deep divisions between them over how far-reaching Scotland’s devolution, or autonomy, should be. Scots have told journalists and pollsters they weren’t sure future British governments would make good on promises of greater autonomy. So voting for independence seemed to some a safer bet. “You’ve had three different views from three different parties about what should be offered regarding more devolution,” Curtice says.

It was only after YouGov’s shock poll results on Saturday that the three British political leaders holed up in closed-door meetings, and emerged with a unified plan for more Scottish rights within the U.K. On Sunday Britain’s finance chief, Chancellor of the Exchequer George Osborne, said Scots would be given “more tax powers, more spending powers, more plans for powers over the welfare state,” which would begin immediately after the referendum. “Then Scotland will have the best of both worlds.”

Scotland’s leader, the First Minister Alex Salmond told journalists on Wednesday that Britain had offered “too little, too late,” and had failed to give Scots what they most wanted: Jobs. But by forcing a promise of permanent new autonomy, Salmond’s nationalists have already won big, even if they lose on September 18. As Cameron, Clegg and Miliband landed in Scotland on Wednesday, Salmond, already looking like a winner, told journalists on an Edinburgh street that the last-minute campaigning by British politicians was “a last gasp piece of desperation in the face of a strong move by Scottish towards independence.”

CORRECTION: An earlier of this story put William Wallace’s heroics in the wrong century.