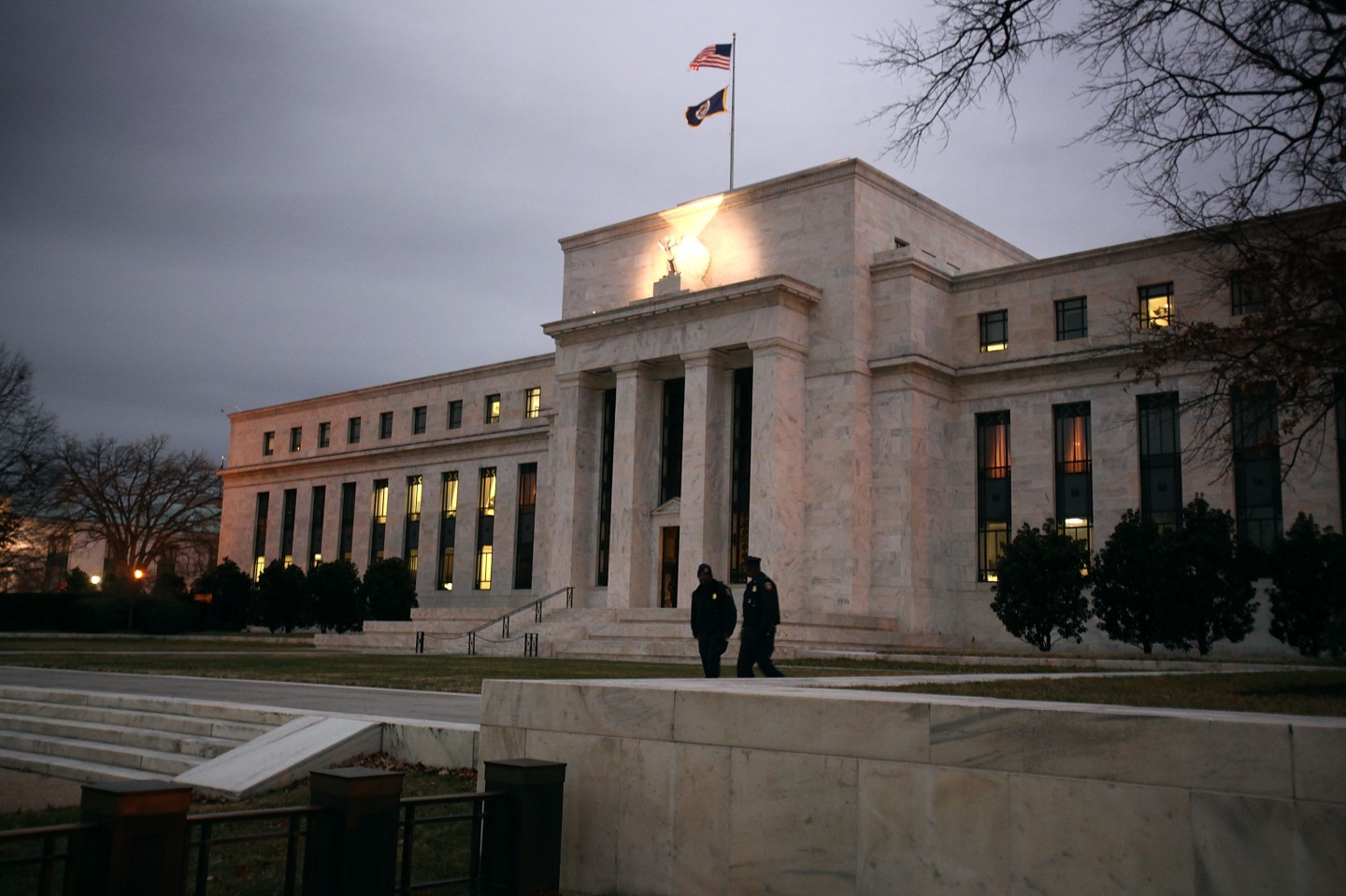 <> December 15, 2008 in Washington, D.C. The Fed began its last meeting of 2009 today, where it is expected to announced another reduction in the key interest rate, amongst other measures meant to stimulate the economy.

Like clockwork, it happens every year: public-sector forecasters like the Federal Reserve or the Congressional Budget Office revise down their projections for U.S. economic growth.

In June, the Fed amended its projections for annual GDP growth in 2014, from almost 3% to 2.3%, after disappointing growth in the first quarter of the year made achieving that target nearly impossible. The Fed has plenty of company—mainstream economists at the IMF and the Congressional Budget Office, to name a few, have also overestimated the wealthy world’s capacity for economic growth ever since the financial crisis. It’s a wide-scale problem. Economists are seemingly unable to explain the slow-growth world we are living in.

So far, many economists have responded to the disappointing performance by saying that that the pickup in growth will surely come tomorrow. In one of his final speeches as Federal Reserve chair earlier this year, Ben Bernanke looked back on Fed overoptimism and explained it away citing short-term factors like sharp cuts in government spending, the aftershocks of the financial crisis, and the European debt crisis. But other economists, including Northwestern University’s Robert Gordon, have been searching for other reasons to explain why the economy has yet to make up the economic ground lost during the recession.

In a working paper released Monday by the National Bureau of Economic Research, Gordon argued that this catchup will likely never happen. He reasons that for the economy to grow as quickly as government economists expect it to, we would have to see productivity gains that are simply far beyond what the U.S. economy has produced in recent years, aside from a brief period in the 1990s, when we were reaping the benefits of the information technology boom.

Gordon points to an anomaly to demonstrate the productivity hangover now ailing the U.S. economy: Despite the fact that GDP growth has been tepid since 2009 (just 2.1% per year, below the post-war average and far below the average for previous recoveries), the decline in the unemployment rate has been relatively swift. The unemployment rate has fallen from 10% at the height of the recession to 6.1% as of June 2014 despite limited economic growth because worker productivity has grown at a historically slow 0.6% per year. The less productivity growth, the more workers a company needs to keep pace, hence the decline in unemployment.

This lack of productivity growth, Gordon contends, explains why Fed economists, among others, have missed the mark in their projections. “Forecasters universally predict that actual real GDP growth will increase from the 2.1 percent average of the past five years to between 3.0 and 3.5 percent per year over the next two to three years,” writes Gordon. “For output to grow at that rate … would require some combination of a much slower rate of decline in the labor-force participation rate … as well as a revival of labor productivity growth well above the 1.2 percent average growth of the past decade, not to mention the 0.6 percent average over the past four years.”

Gordon argues that most economic forecasters mistakenly predict the future of the economy from the the perspective of demand. Consumption by consumers and the government and investment by individuals and businesses tend to grow over time and catch up with a long-run trend after damaging recessions. But without population growth to fuel a larger labor force and productivity growth to make producing what is in demand more readily available, economic growth projections will not come to fruition. And as Gordon has argued previously, there’s reason to believe that the technological gains of the information age have already been realized, and the innovation that is occurring now (for example, Silicon Valley’s obsession with social media) is superficial and won’t lead to the more efficient production of goods and services that is needed for fast growth.

The result? A depressing outlook for the future of the American economy. Without productivity growth, government debt in relation to GDP will rise much more quickly than expected, and the current, accommodating monetary policies of the Federal Reserve could lead to destabilizing inflation. As Gordon puts it, “The American economy has evolved from a fast-moving rabbit to a slow-moving turtle, and the community of academic economists, business economic forecasters, and policymakers inside the government have been slow to recognize this profound transformation.”