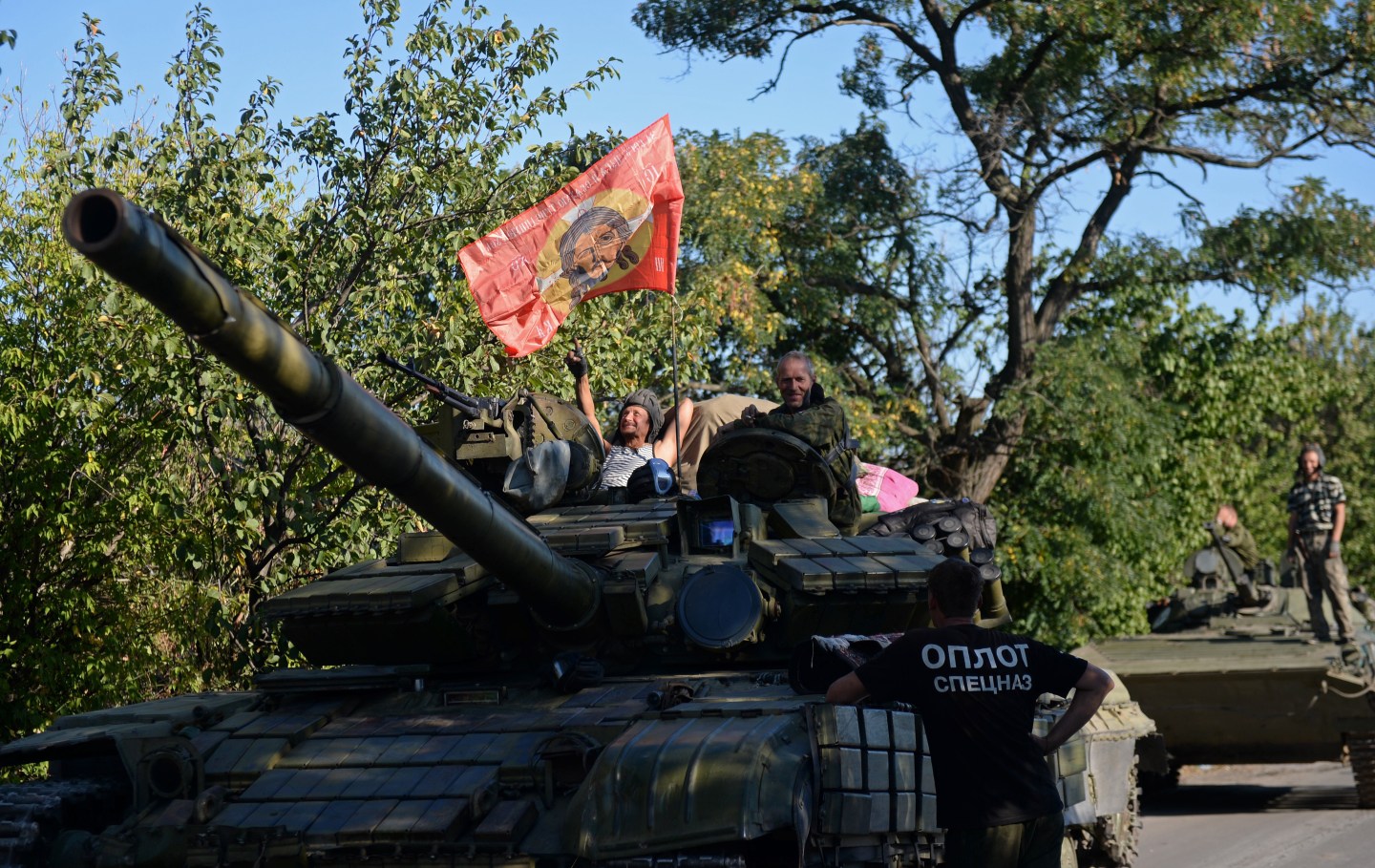 Pro-Russian fighters sit ontop of a tank in Starobesheve, southeast of Donetsk, on August 31, 2014. Pro-Russian separatists were preparing a fresh offensive on a key coastal location in eastern Ukraine on Sunday, as EU leaders gave Moscow one week to curb its support for the rebels or face new sanctions. A ragtag mix of volunteer battalions and local residents were bracing for a desperate defence of Mariupol, a strategic port city and the last big town in the region still under Ukrainian control. AFP PHOTO / FRANCISCO LEONG (Photo credit should read FRANCISCO LEONG/AFP/Getty Images)
FRANCISCO LEONG/AFP--Getty Images

Russia’s currency hit a new all-time low and its borrowing costs a five-year high Monday, after the E.U. threatened tougher sanctions against Moscow in retaliation for its sending troops and military equipment to Ukraine.

Western European markets also suffered from what threatens to be another economically disruptive escalation of the conflict, with the French, German and U.K. stock indexes all heading lower. They were helped in that direction by a series of downward revisions to economic surveys for August–surveys that were themselves overshadowed by the Ukraine conflict.

The ruble hit an all-time low of 37.503 against the dollar in early trading in Moscow, and also fell to a four-month low against the euro. Meanwhile, the yield on Russia’s ruble-denominated 10-year bonds rose as high as 9.89%, its highest since October 2009.

Newsflow over the weekend had been overwhelmingly negative, as a summit meeting of the E.U.’s 28 member states agreed to widen sanctions against Russia in a week’s time if it didn’t act to de-escalate the situation. The U.S. has also said it is considering tougher measures. The E.U. said it wanted to “include in its proposal a provision on the basis of which every person and institution dealing with the separatist groups in the Donbass will be listed.”

However, a U.K. proposal to ban Russian banks from the SWIFT system that handles international payments–a key part of the sanctions that have crimped Iran’s economy in recent years–appeared not to gain traction.

Russian President Vladimir Putin’s rhetoric over the weekend had suggested that his, if anything, he was prepared to escalate the situation further–all the way to the possible partition of Ukraine. Putin told Russian TV that it was time to discuss giving “statehood” to the two separatist regions of Donetsk and Luhansk. Putin had already referred to them last week under the term “Novorossiya”, or New Russia, a Tsarist-era phrase heavy with imperial overtones. He told reporters Monday he didn’t think the Ukrainian government was interested in any such dialog.

Russian Foreign Minister Sergey Lavrov told an audience of students in Moscow that Russia would retaliate again if the sanctions are widened.

“We will first of all start from our own interests – protect our economy, protect our social sphere, protect our businesses and at the same time draw conclusions from the actions of our partners,” Reuters quoted Lavrov as saying.

Alarm at the escalating conflict has spread as far as Beijing, with Chinese Foreign Minister spokesman Qin Gang warning Monday that “Sanctions do not help to solve the underlying problems in Ukraine… It may lead to new and more complicating factors.”

Ukrainian forces continue to lose ground against opponents revitalized by the apparent influx of reinforcements from Russia. Andrey Lysenko, a spokesman for the country’s National Security and Defense Council, said at least four Russian tactical battalions with heavy equipment were fighting inside Ukraine.

“Direct and open aggression has been launched against Ukraine from a neighbouring state. This has changed the situation in the zone of conflict in a radical way,” Ukrainian President Petro Poroshenko said.