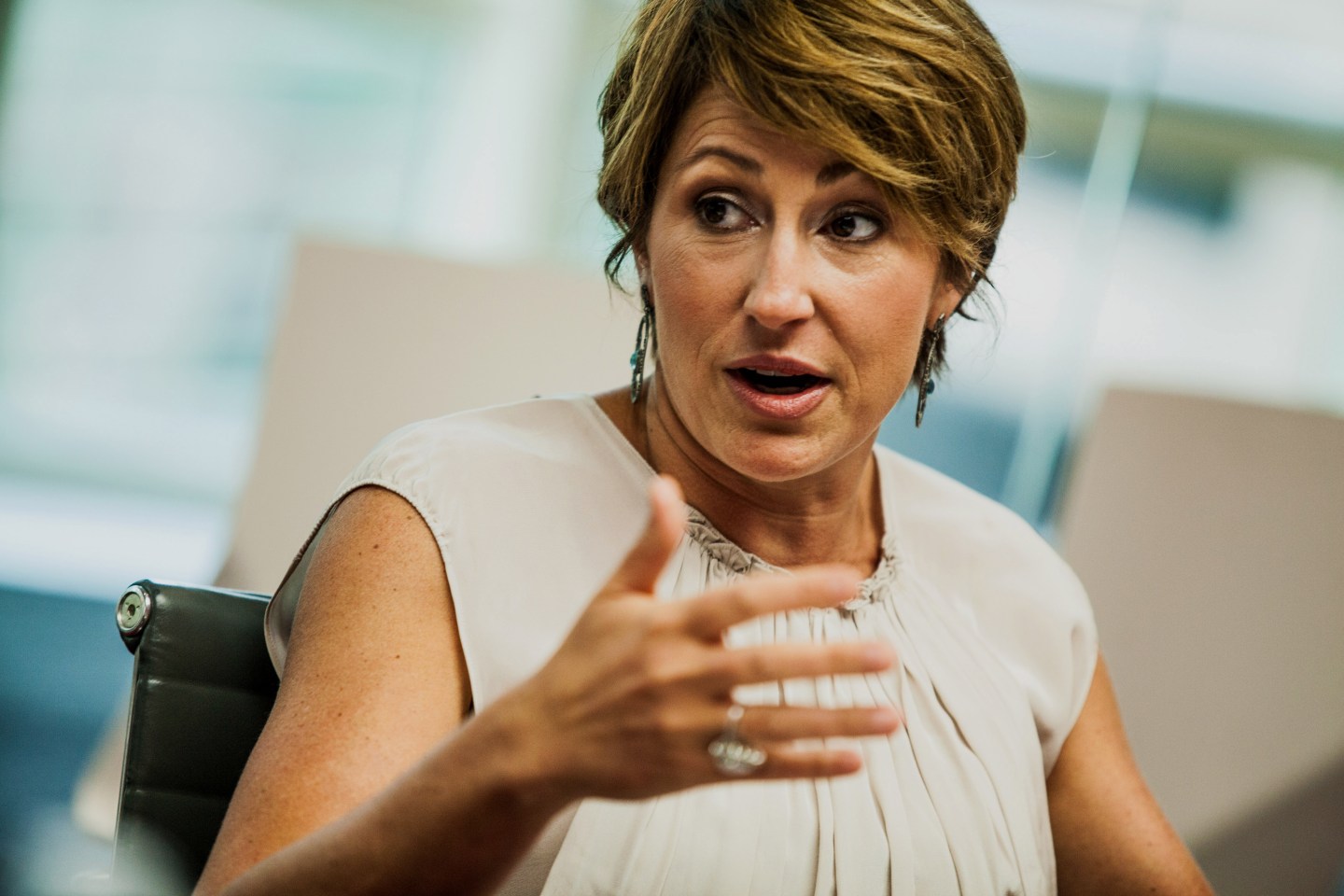 Heather Bresch, chief executive officer of Mylan Inc., speaks during an interview in New York, U.S., on Thursday, May 1, 2014. Bresch discussed the U.S. corporate tax code and the impact of consolidation in the pharmaceutical industry on generic drugmakers like Mylan. Photographer: Chris Goodney/Bloomberg via Getty Images
Photo by Chris Goodney/Bloomberg/Bloomberg—Getty Images

When Heather Bresch joined pharmaceutical firm Mylan 22 years ago as a secretary in the quality assurance department, the company had roughly $100 million in revenues. Now Mylan’s CEO, Bresch is running a business that had $7 billion in sales last year. During her long tenure, the company has transformed into a global business. But she says America’s corporate tax system has remained stagnant, hurting its business competitiveness in the process.

In a move that Bresch says was critical to ensuring the future success of her company, Mylan announced in July that it would acquire Abbott Laboratories generic drug business. The $5.3 billion deal will allow Mylan to relocate its company headquarters from the U.S. to the Netherlands, skirting higher U.S. corporate taxes in the process. In an interview with Fortune, Bresch talks about the controversial deal – President Barack Obama has called deals like Mylan’s “unpatriotic” – and her reaction to the heated political discussion it generated.

What are some of the trends going on within the pharmaceutical industry that led to the Abbott deal?

We truly live in a global economy today. I would say that the pharmaceutical industry is hyper-competitive from a global perspective. We import about 15% of goods as a country and yet close to 50% of our pharmaceuticals are imported. As the competition gets more fierce, consolidation is inevitable and there are a tremendous amount of transactions happening. You see the good and the bad and the ugly of Wall Street. They don’t care about you building a company. They want returns in 30 seconds and for many companies to deliver that kind of growth, it is [acquisition] based because organic growth can’t be that driver. Mylan is fortunate because we have put so many things in place that our growth targets are not dependent on a major acquisitions, but acquisitions could accelerate those targets.

How did a lower corporate tax rate in the Netherlands play into the decision?

Tax has generated a significant amount of discussion, and companies are forced to do what they can to maintain that global competitiveness and perform. I look at Mylan and see that we are the last company, in terms of our major competitors, that is headquartered in the U.S. That puts me at a huge disadvantage. I pay the largest corporate tax. As I am trying to deliver and grow this company and I am now handicapped and penalized being in the U.S. We can’t stand still and stay in the U.S. because of all the political rhetoric. Someone in Washington needs to get serious about fixing the tax code. That is what needs to happen. Who is being punished here is America because we are losing what makes us great.

Were you surprised by all the attention the deal got from political leaders and the press?

I realized that it was beginning to take the shape of an election issue, which always make it extremely volatile and partisan. If all of this lights a fire on how dysfunctional and uncompetitive our system is then it was well worth it because it needs to be fixed.

How do you feel about President Obama calling deals like the Abbott deal “unpatriotic?”

When I hear things like “unpatriotic,” I just chalk it up to a lot of political rhetoric. The reality is the move we are making will maintain the jobs that we not only have here in the U.S. but allow us to continue to expand. [The other option] is being acquired by a foreign entity that is going to use the U.S. as a synergy. That is lost on most.

Has Obama reached out to you to discuss corporate tax inversions?

No, and I would love to say that he should, but unfortunately I have lost respect for him. This is what he lacks as a leader. He is not hearing from us. He has isolated himself, from my perspective, and hears from who he wants to hear from versus understanding the issue. He didn’t want to take this on as a policy issue and he doesn’t want to fix it. I haven’t heard from anybody in the administration.

Your father is Democratic Senator Joe Manchin from West Virginia. How do you guys talk the issue?

I couldn’t ignore the fact that my father is a U.S. senator. That puts a unique light on the deal. We have found ourselves in unique positions before given his rise in politics and my rise through Mylan. We don’t talk about it. We certainly talk philosophically about policy issues, but I don’t talk about Mylan specific issues and he doesn’t bounce bills off me. We have separated those roles. I think people conjure up in their minds that we sit around a table and hash out these issues. We don’t. I make the decisions that are right for my company and he makes the decisions that he thinks are best for West Virginia. We keep it at that.

What’s your take on the news that Burger King is in talks to acquire Canada-based Tim Horton’s in a move that could allow Burger King relocate to Canada?

If this puts sunshine on the issue, that’s great. Just like Walgreens generated a lot of discussion, Burger King is a company that people are aware of, even if people don’t know what an inversion is (Editors note: A tax inversion is the technical term for relocating a corporation’s headquarters to a nation with lower taxes). It creates sensational headlines that say you’re unpatriotic if you eat a Whopper. I read that and say you’ve got to be kidding me. I hope again that if this highlights the larger issue than it is beneficial.

To get Caroline Fairchild’s daily newsletter on the world’s most powerful women, go to www.getbroadsheet.com.