For one student, dreams of drone-based advertising take flight 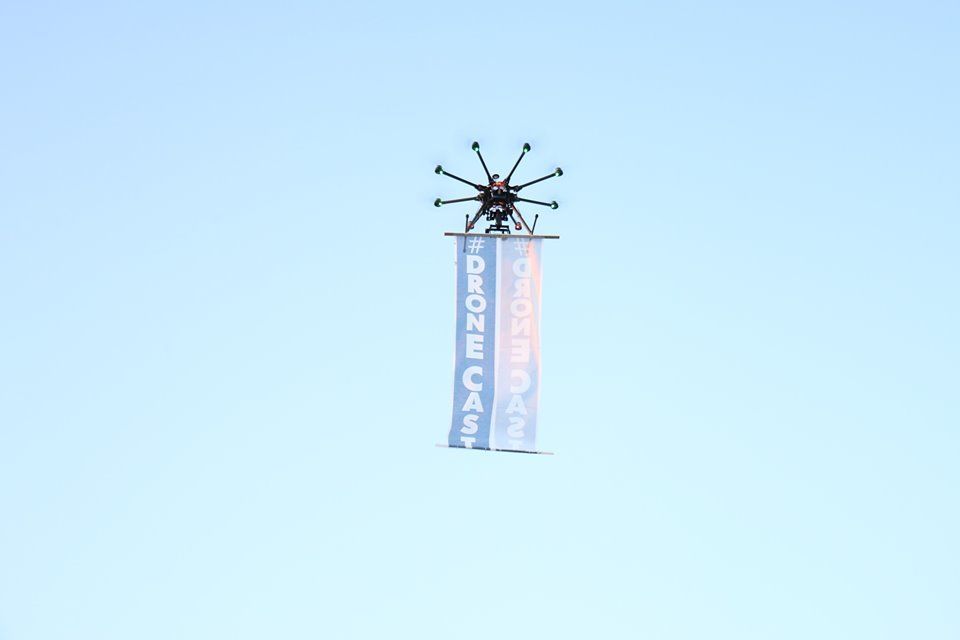 Raj Singh’s moment of revelation came in November of last year, when Amazon.com founder Jeff Bezos hawked a line of package-delivering drones to Charlie Rose on 60 Minutes. Nine months later, the 19-year-old college freshman is the founder of DroneCast, the only U.S. company, he claims, that does drone-based advertising.

“Right when it was going on, I was like, that’s genius,” says Singh, whose first name is actually GauravJit, although he goes by Raj. “People have been using drones for photography for a few years now. Then it hit me. What happened with the Internet? People put ads everywhere. I wanted to do the same thing with drones.”

Think of the prop planes that fly parallel to beaches with big banners billowing behind them announcing deals on salt-water taffy. Now take that banner, stack the letters on top of one other until they spell out a word, and fasten it to the underbelly of a quadcopter. For this, Singh turned his back on studying biomedical engineering at Drexel University. He says investors have already committed $1 million to his Philadelphia-based startup, which aims to take a piece of a $7 billion “out of home” advertising market that includes conventional billboards, transit ads, and so-called street furniture, according to the Outdoor Advertising Association of America.

“There is no one else doing this,” Singh says. DroneCast filed for a provisional patent for this sort of drone-mounted display advertising in January.

Assembling a fleet of drones is not cheap, as Singh has discovered. When he dropped out of Drexel in January—albeit temporarily; he returns this December to study entrepreneurship—he borrowed $15,000 from his father to fund a series of tests. He needed to figure out what types of motors would keep a drone-copter airborne while it was saddled with the weight of a hanging banner advertisement. Singh completed a successful test flight with a prototype drone at the end of April. Since then, he has amassed an aerial advertising squad of six drones. Each of the drones cost between $10,000 and $15,000; Singh’s modifications, which include off-the-shelf features like foldable or automatic landing gear and bigger motors, push the prices up further. The most expensive drone in DroneCast’s fleet is a DJI S1000 Octocopter that costs $25,000.

At the BeachGlow Music Festival in Wildwood, N.J. over the Independence Day weekend, all Singh’s drones were on display, though not all of them were airborne. The smaller DJI Phantom 2 quadcopters, each of which weighs about three pounds, dropped glowsticks from about six feet above the heads of festival-goers, while the 8-lb. S1000 hoisted a 3-foot-wide by 10-foot-tall banner 22 feet into the air.

Of course, the publicity from Singh’s project, some of which is self-induced—he recently completed a national promotional tour for DroneCast in July that hit Las Vegas, Los Angeles, and Miami—has attracted more than just the consideration of deep-pocketed investors.

“It has gotten us a little bit of attention from the FAA as well,” Singh says.

Since 2007 the Federal Aviation Administration has held that using drones for any type of commercial activity is illegal, often citing safety as its main concern. Seven years later, that prohibition seems rather quaint. It was issued at a time when the word “drone” evoked images of large, military-style machines that fire missiles while flying over foreign countries. The FAA, anticipating the use of such high-altitude drones for law enforcement and border control, never predicted the miniaturization and sophistication of technology to the point where tiny cameras and smaller drones flown at much lower altitudes might become more mainstream. Today, the people that the agency classifies as hobbyists who take photos with small drones—what the agency sometimes calls “model aircraft”—for their own personal use are free to do so. But taking photographs by drone with the intention to sell them to others? Can’t do that, according to the FAA.

“The agency has not been able to come up with guidelines that really effectively address the appropriate use of those kinds of drones,” says New York lawyer and head of Unmanned Aircraft Systems law group Brendan Schulman. “In the interim, they’ve basically attempted to restrict or stop people from doing just about anything using this technology.”

It was Schulman who represented 29-year-old Raphael Pirker, fined $10,000 by the FAA after using a drone to film at the University of Virginia. A federal judge dismissed the fine in March, ruling that the FAA’s 2007 policy ban was unenforceable because the agency hadn’t sought the required public feedback on its rules governing the commercial use of drones before issuing them.

The FAA, however, appealed the dismissal, and continues to maintain that operating drones in a money-making endeavor is illegal, even if the Washington, D.C. Court of Appeals recently ruled that the FAA’s informal e-mails and letters ordering drone users to cease operations are invalid. In a document the FAA released at the end of June calling for public comment on its drone policy, the agency outlined specific uses of drones it considers unlawful. Among them: realtors using drones to photograph properties they’re selling, commercial farmers using drones to determine if crops need watering, and using drones to deliver a package for a fee—an implicit interdiction against Amazon’s right to deliver products by octocopter. Just this month, three separate lawsuits against the FAA were filed by groups challenging the interpretations of lawful and unlawful drone use the agency put forward in June.

As far as DroneCast is concerned: Singh says that if the FAA releases a set of drone rules that circumscribe commercial activities in the name of safety, he’s ready to fall in line. “Safety is our first priority,” he says.

But Singh appears unworried—and undeterred. His company’s three lawyers have told him the same thing: because a federal judge said the FAA could not fine Pirker for taking photos and film by drone, advertising by drone should be legal, too.

“We’re not looking to go up against the FAA,” he says. “We’re just trying to change the face of advertising.”