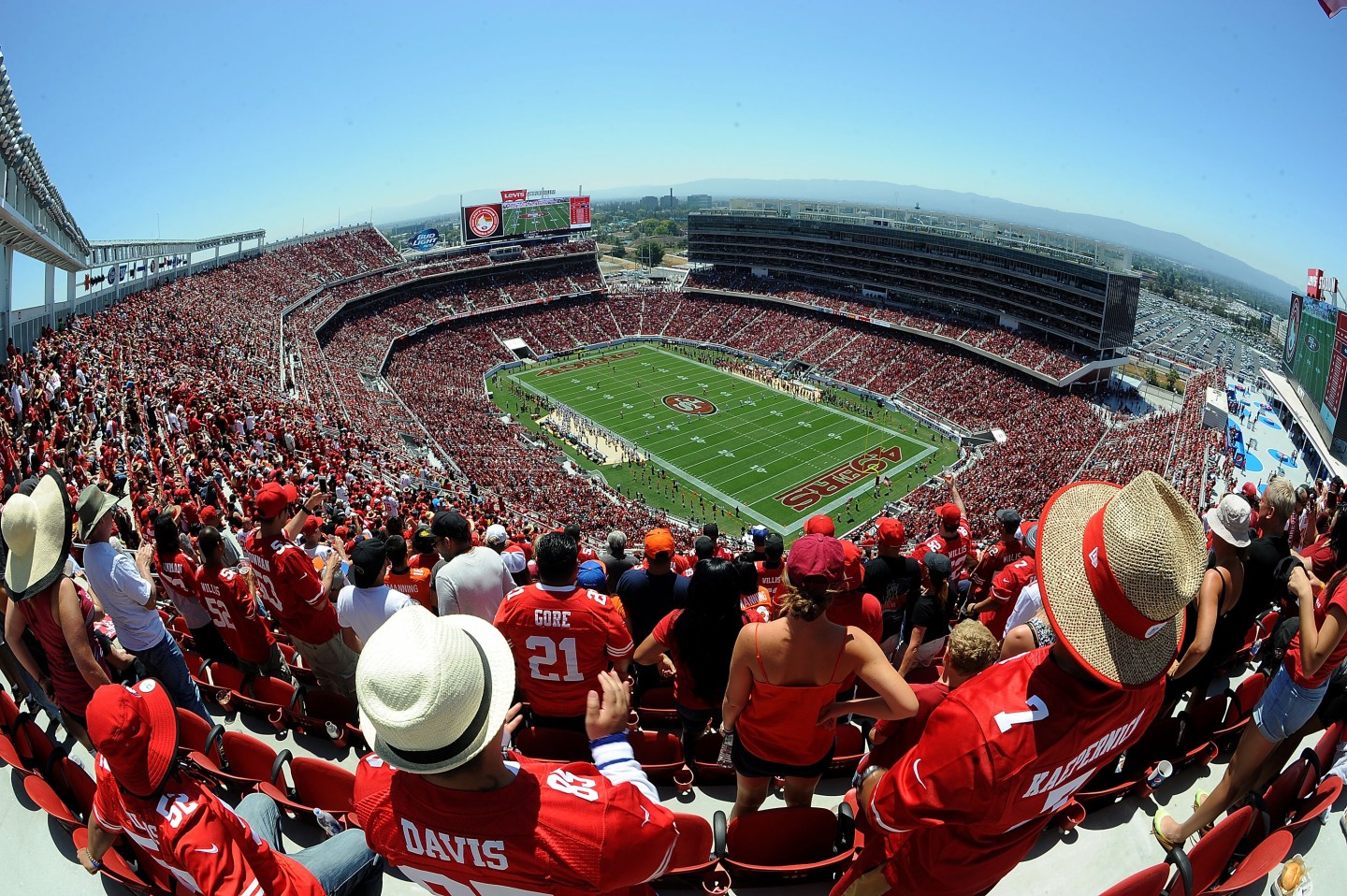 NOTE: See update at bottom of this story.

Less than three weeks from now, the brand new, tricked-out, $1.3 billion Levi’s Stadium will at last host its first regular season NFL game, with the home team San Francisco 49ers taking on the Chicago Bears. And it will serve up food provided by Centerplate, a Connecticut-based, Aramark-like caterer for sports and entertainment venues that scored big when it landed the new stadium as a client.

It is unlucky timing for Centerplate to be undergoing an ugly scandal playing out on the viral Web: CEO Des Hague, who has led the company since 2009, was caught on video surveillance abusing a dog in an elevator. The footage, taken from a Vancouver apartment building, shows the food executive kicking a Doberman puppy, then yanking it up by a leash.

The video surfaced last week and made the rounds over the weekend in time for fans at some of the arenas serviced by Centerplate to protest. Outside BC Place in Vancouver, for example, before a Sunday afternoon Canadian Football League game, some fans told the media that they would not be purchasing any food in the stadium, and they called for Hagues’s firing. Some suggested BC Place ought to end its contract with Centerplate.

In a statement released yesterday through his attorney, Hague apologized and said the incident was, “completely and utterly out of character.” He continued: “I am ashamed and deeply embarrassed… a minor frustration with a friend’s pet caused me to lose control of my emotional response… I would like to extend my apology to my family, company and clients, as I understand that this has also reflected negatively on them.”

Centerplate has 30,000 employees and more than 350 clients, some 65% of them sports venues. In the food-services industry, it occupies an estimated $6 billion niche. It is a small-but-growing challenger to one of the leaders in the space, Aramark, which did just under $14 billion in 2013 revenue. The private company has changed hands a few times: originally owned by chain restaurant holding company Flagstar, itself owned by KKR, Centerplate was sold to Blackstone in 1994 and eventually went public in 2003. In 2009, it was taken private again after merging back with Kohlberg & Co. And in 2012, Kohlberg & Co. sold Centerplate to Olympus Partners for a reported $550 million. Centerplate says it has not had a down year since 2008, and that it has tripled its number of accounts, and doubled in sales, since Hague took the reins in 2009.

Hague comes from a food-services background. Prior to Centerplate, he held executive positions at IHOP, Safeway, Taco Bell (YUM), Pizza Hut, and 7-Eleven, where he oversaw the operations of more than 25,000 franchises. He also worked in strategic marketing at Maytag. In an in-person interview with Fortune earlier this month (before this incident), Hague said, “This is just as hard, to run 350 venues, as it was to operate 30,000 7-Elevens.” He said that after a long run of working at recognizable brands, he left to run lesser-known Centerplate because, “Innovation in the food services space was very limited. It was all cookie-cutter and not differentiated. We wanted to reinvent this space, from food service to hospitality.” In an era when sports arenas face the growing burden of drawing fans who would save money by staying at home to watch a game, Hague said Centerplate wants, “to be the defender of live events, to make it better for fans to be there.”

Centerplate scored the business of the new Levi’s Stadium in San Francisco when the project was in its infancy; it was also the food provider at Candlestick Park, where the Niners played previously. It is a big account for a company with some of its biggest venues outside of the U.S., and a company with little presence in New York City, the biggest media market for sports. (The city’s two biggest venues, Madison Square Garden and Yankees Stadium, are locked in to long-term deals with bigger food providers.) Indeed, the opening of the 49ers’ new home has been much anticipated, and the stadium is already being lauded for its high-tech design and bells and whistles. Centerplate CMO Bob Pascal told Fortune that Levi’s Stadium was a significant new client, but also that Centerplate isn’t a consumer-facing business—that is, it doesn’t need fans to be aware of its brand name, just to be happy with the food and service it gets at any venue that uses Centerplate. “Our job is not to make them fall in love with our blue C logo, but with the 49ers,” said Pascal. “We have the best customer service, the best experience for guests and fans. It can’t be lip service, you can’t fake it.”

So what will this scandal mean for Centerplate’s business? If it doesn’t want to be perceived as just paying lip service, then it needs to take action regarding Hague, says crisis management expert Steve Paskoff, CEO of ELI, which does corporate sensitivity training. “My immediate reaction to this news was, this is a guy who will kick and drag a friend’s dog—what else is there to say about him? And if he treats defenseless dogs this way, how is he treating people?” said Paskoff. “Is Centerplate going to be comfortable saying he represents our values, which state [on its website] that the company is ‘a positive force in our communities?'”

For now, there are no legal charges against Hague, and the company has commented, “This is a personal matter involving Des Hague. Centerplate does not condone the mistreatment of animals, and since learning about the situation late Friday night, have reached out to local authorities to better understand the facts and circumstances related to the incident. As this is an ongoing review, we cannot comment further at this time.” But Paskoff says that, short of firing Hague, Centerplate needs to do something beyond a mere press release. “If you leave it alone, and don’t do anything, that says you find it acceptable. So the first thing is, let’s do a thorough investigation. While we’re doing a thorough investigation, you put him on some type of suspension. You do this as fairly, rapidly, and efficiently as you can,” he says. “I think for many, many people, when you harm an animal for no reason, that is a low offense. It says something really serious about your character, and character matters when you lead an organization.”

Indeed, some eaters have taken to Twitter, using the hashtag #DesHague (Hague deleted his account) to voice their outrage.

For now, Hague remains CEO of Centerplate, and no clients have yet ended their contracts. The 49ers, in a statement sent to Fortune, said that the organization, “condemns the abuse of animals and was disturbed to learn of the recent news regarding Des Hague. We believe his actions are not reflective of the efforts and service provided by the hundreds of Centerplate employees working to present our fans with a tremendous experience at Levi’s Stadium.” (Levi Strauss deferred comment to the 49ers.)

Perhaps Centerplate can use the opening of the season at Levi’s Stadium to bounce back from the bad PR. It is a stadium with a strong, secure wi-fi network to serve nearly 70,000 fans and give them the ability to order food from their seats via a mobile app. It offers a huge range of dining options, the vast majority of them sourced locally. If the food earns high marks, perhaps it won’t matter to fans who the executive is that stands behind the catering brand. After all, Michael Vick, prosecuted for operating a dog-fighting ring in 2007, is back in the NFL as the backup quarterback for the New York Jets; his offense, though not forgotten, is no longer mentioned every single time his name comes up. Then again, as Paskoff points out, “Michael Vick did penance. He was prosecuted, he went to jail, he paid a heavy price. So there may be a place for penance here.”

UPDATE, August 27, 2014: Centerplate’s CEO Des Hague has been placed on probation, will donate $100,000 to a dog charity, and will do 1,000 hours of community service. Centerplate released a new statement, its third this week on this incident: “Upon internal review of the incident, and recognizing that Mr. Hague is truly ashamed of his actions and has expressed sincere remorse and shame for erratic behavior that is uncharacteristic of him we have decided to take the following immediate actions: Mr. Hague will be given a written censure by the Board whereby he will be placed on indefinite probation stating that any further acts of misconduct would result in immediate termination. As a condition of his continued employment with Centerplate, Mr. Hague will personally donate $100,000.00 USD which will be donated towards the establishment of the Sade Foundation in honor of the dog he mistreated in the elevator to help support the protection and safety of animals in the city of Vancouver where the incident occurred. Further, we are requiring Mr. Hague to serve 1000 hours of community service in support of an organization that serves to protect the welfare and safety of animals… Mr. Hague still faces potential charges in Vancouver, where he is personally responsible for charges and fines in relation to the incident.”