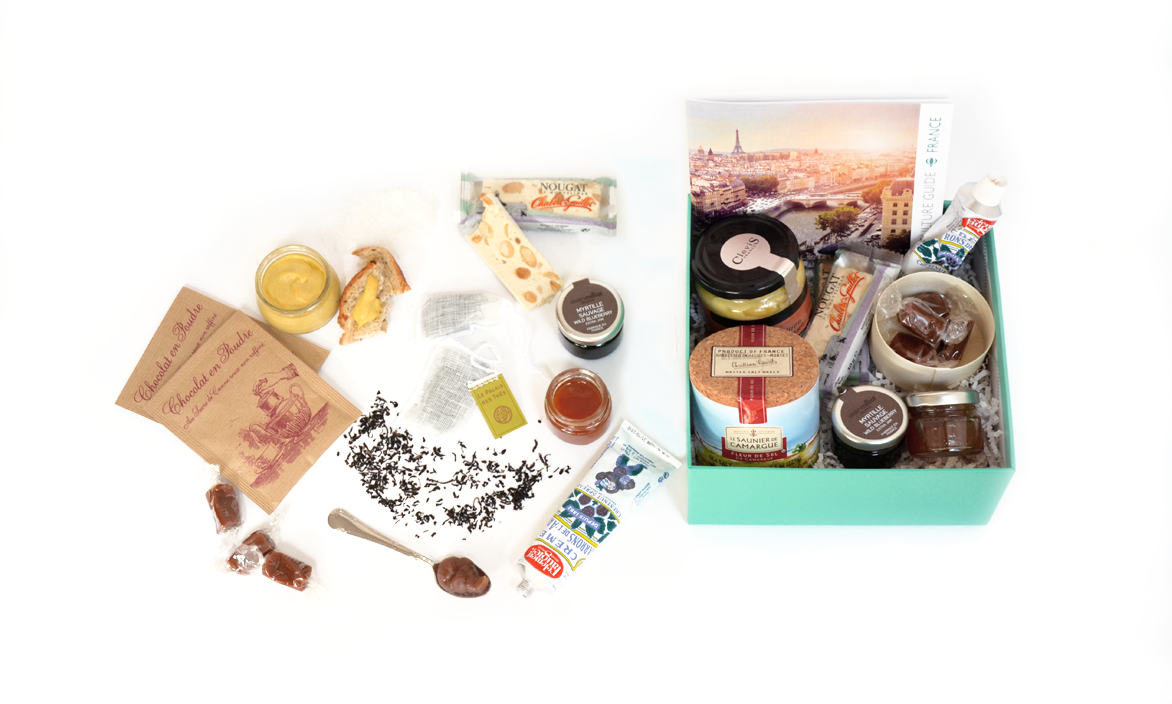 Blame the Food Network. The television channel and its many tentacles has transformed the idea of being foodie, once the province of boring recipe shows, into full-on adventure entertainment. If not that, then blame the Whole Foods-fueled movement toward healthy and local eating. Whatever the cause, culinary tourism is on the rise. Ten years ago, it was barely discussed. Today, it’s an estimated $150 billion industry, according to the World Food Travel Association.

Not everyone can afford to live like Anthony Bourdain, though. The startup Try the World, Kat Vorotova and David Foult, has emerged to bring exotic foods from far-flung destinations to doorsteps around the U.S. The New York-based company has been shipping $45 boxes of various packaged foods to subscribers since the beginning of this year. (The boxes can be purchased individually or via monthly subscription.) The goal with the company’s first box, a Valentine’s Day package from Paris, was to make $1. The boxes sold out within two days, and Try the World has shipped thousands of boxes since.

Thus a box that allows curious eaters to sample snacks and flavors of other cuisines without actually traveling there. Try the World’s boxes are curated by local chefs or people in the food industry looking for exposure in the U.S. The goal is to offer an authentic mix of local favorites, packaged with background information to put the food into context. The Paris box, for example, features a chestnut spread from a region protected by a government standard called appellation d’origine contrôlée, a package of hand-harvested salt from the Camargue region, and teas from Palais des Thés.

“We really want it to feel like the experience of someone who is traveling and sending you the best goodies,” Vorotova says. The company works with foreign brands to get deep discounts on the items included in the boxes, since many foreign food brands are seeking to grow in the U.S.

Try the World has shipped boxes from France, Japan, Brazil, Italy, Turkey, and India. The next box will be focused on foods from Great Britain. The boxes are marketed as city boxes, focused on one location, but feature items from around the country that would appear in a store in a particular city.

Try the World has raised $700,000 in seed funding from angel investors to expand its offerings and invest in marketing. The investors include Georges-Henri Levy, a French entrepreneur; Brian Kleinberg and Beth Lacey, former American Express executives; Ketty Maisonrouge, a professor at Columbia Business School and luxury strategist; Kevin Quinn, a Partner at Genki Advisory; Dominique Faye, a food industry executive; and The Eugene Lang Entrepreneurship Fund at Columbia Business School.

The money will also go toward building an online marketplace, where customers can directly purchase items from the monthly boxes. That move follows the footsteps of one of the most successful subscription commerce startups, Birchbox, which has 800,000 subscribers and was valued at $485 million in its latest round of funding. Birchbox gets around 30% of its revenue from direct purchases and the rest from monthly box subscriptions.

Subscription commerce became a trendy business model among startups several years ago, led by startups like Birchbox (focused on cosmetics) and followed by the apparel companies ShoeDazzle, BeachMint, and JustFab. Subscription companies like Barkbox (for dog supplies), Dollar Shave Club (for razors), and Blue Apron (for meal ingredients) raised large rounds of funding. Others including Lot18 for wine, Caskers for craft spirits, and Craft Coffee for coffee have made their mark introducing foodies to new specialty products. Now there are monthly subscription services for just about anything, from condiments (Ship and Dip) to marijuana accessories (The Happy Crate). There’s even one for lingerie and sex toys called Blush Box.

The category has not been without its failures. ShoeDazzle, BeachMint, and JustFab have struggled and ultimately consolidated. (BeachMint scaled back before merging with Lucky magazine earlier this month; JustFab and ShoeDazzle merged in late 2013.) Others, such as celebrity-infused 12Society, found soft landings. TastingRoom, a subscription wine service, sold to Lot18. Two subscription sex toy services, BoinkBox and SpiceGuides (previously known as Dejamor), have put operations on hold.

Vorotova says she’s observed some of the shortcomings of subscription commerce and learned that subscription commerce needs to over-deliver every month. “You have to create some kind of value for the subscriber, along with excitement and experience that is shareable and essentially becomes viral,” she says. Try the World includes large portions of each product in its boxes, so customers don’t feel they’re not getting enough value.

One drawback? Try the World’s boxes only feature packaged foods, since that’s what’s shippable. Further, the boxes can only include FDA-approved items. Which means that holy-grail items of foodie tourism—illegal Spanish ham, say, or unpasteurized French cheese, which is more difficult to purchase in the U.S. than a gun—still requires a trip abroad.

Update: A previous version of this article incorrectly stated that Try the World’s co-founders were ex-Google employees. They were participants in an incubator at Google.