The big funds on Apple: Who bought, who sold last quarter 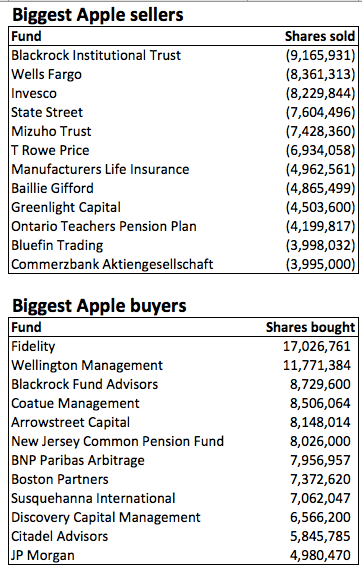 What makes the incident particularly absurd is that Einhorn is a relatively small player in the churning money machine that is the trade in Apple securities and options.

Take, for example, Blackrock, the investment management giant from whose ranks Apple drew its newest board member, Sue Wagner, a founding partner. One of Blackrock’s biggest funds — Blackrock Institutional Trust Company — quietly sold twice as many shares last quarter as Einhorn. Together, a half dozen Blackrock funds own 312 million Apple shares, 33 times as many as David Einhorn’s 9.5 million.

We know all this because hedge funds with more than $100 million under management were required to open their books to the SEC last week in a quarterly filing known as a 13f.

According to Whale Wisdom‘s Daniel Collins, Apple topped the list once again — both in terms of the number of firms holding the stock and in the value of their holdings.

Overall, according to Collins’ summary:

There wasn’t much change in our Big Dozen list of the largest Apple funds. The only celebrity there is Carl Icahn, and although Business Insider saw fit to run a headline last week on his Apple holdings, Icahn didn’t buy or sell any Apple last quarter.

Its hard to draw any conclusion from all this, except that Apple was a hotter stock in the second quarter of 2014 than it was in first, and that the business press isn’t getting any better at covering the action.

UPDATE: Katy Huberty put these near-term changes in a longer-term context in a note to clients issued Tuesday. She points out that institutional ownership of Apple is still well below its historic average. See 8 reasons Morgan Stanley is bullish on Apple.

See also: The big funds on Apple: Who bought, who sold in Q1