Video: Bots already dominate the stock exchanges. Your job is next. 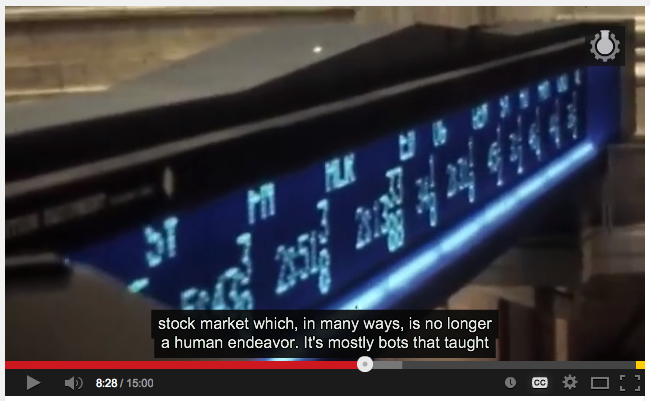 “Take the stock market,” says the narrator half-way through Humans Need Not Apply, a provocative — and disturbingly persuasive — YouTube video that was posted Thursday and quickly went viral (1.5 million views as of Sunday a.m.).

“Again: it’s not bots that are executing orders based on what their human controllers want, it’s bots making the decisions of what to buy and sell on their own.

“As a result the floor of the New York Stock exchange isn’t filled with traders doing their day jobs anymore, it’s largely a TV set.”

The speaker is CGP Grey, the pen name of a blogger, podcaster and videographer whose explanatory YouTubes put the best of broadcast news and factual programming to shame.

Grey made his anonymous name — and his first million subscribers — with The United Kingdom Explained, a 2011 video that clarified in five minutes (and once and for all), the difference between the U.K., Great Britain and England.

His latest work may be his best yet. It’s a 15-minute sprint through the history of man’s relationship with his tools that reaches the alarming conclusion that we are today where horses were in 1915, when the world’s equine population peaked.

“Technology,’ as he puts it, “gets better, cheaper, and faster at a rate biology can’t match.”

Result: Abundance, massive unemployment and the inevitable automation of nearly every job that humans do today — even mine. Newspapers, Grey points out, are already running financial new stories written by computers.

There’s no particular Apple angle here, but there may be a Google (GOOG) one.

Larry Page and Sergey Brin are pouring enormous financial and human capital — more than any other corporate leaders — into developing artificial intelligence and machine learning. Their early and most conspicuous success: The self-driving car.

Google’s vision of the future is the one CGP Grey describes.

Below: Humans Need Not Apply