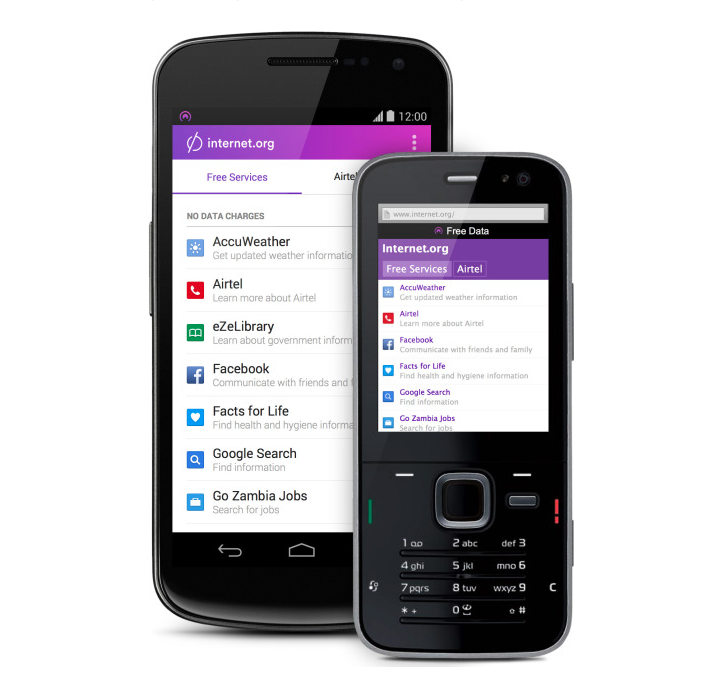 If you asked a group of women in Zambia to list their basic legal rights, a majority of them couldn’t even name five, says Chisenga Muyoya, co-founder of Asikana Network, a women’s rights nonprofit. Since 2012, Muyoya has reached about 1,000 women through her website and some local events to try and change that. Little by little, her hope is that more women will learn their rights and take action when they have been violated.

Now, through a partnership with Facebook’s accessibility initiative Internet.org, Muyoya will be able to instantly provide information to millions.

In late July, Facebook announced a new Internet.org mobile application—available on the Web and natively on Google Android devices, and intended for the developing world—that offers access to a limited set of services, 13 at launch, without subjecting a user to data charges. Those services include the Asikana-built Women’s Rights Application, or WRAPP, which provides access to women’s health and legal information.

The Internet.org app will launch in Zambia, a southern African nation that lies west of Mozambique, before rolling out to other developing countries. It is part of Facebook’s larger philanthropic mission to make Internet access more available and affordable. In Zambia, for example, just 15% of people are online.

“We live in a time where the digital divide is more of an economic divide,” Muyoya says. “We hope that through this partnership, we can make information more accessible to everyone.”

Facebook (FB) chief operating officer Sheryl Sandberg says the Internet.org team’s first goal was to define what “basic” services the app would provide for free. Weather, Google search, Wikipedia, and Facebook seemed like obvious choices, but developers felt strongly that women’s services were equally important. Giving farmers access to information about the weather can transform the way they tend to their crops. In the same light, giving women the information they need to be informed about their rights could have a dramatic effect on societies.

Sandberg, who works to empower women outside of Facebook with her organization LeanIn.org, says most of the laws protecting women around the world are better than their enforcement. Citing rules on the books in developing countries that protect women from rape and genital mutilation, she says they are not prosecuted because women are largely unaware of their protections. Ultimately, the app has the potential to spur officials in Zambia to more actively enforce the laws that are already on the books.

“Once women and men are aware of those laws, they go for protection and they force that enforcement to happen,” Sandberg says.

The WRAPP service on the Internet.org app is complemented by two other services geared toward women. Facts for Life, by the children’s rights group Unicef, provides child-raising information for families. Mobile Alliance for Maternal Action, or MAMA, delivers health information to new and expectant mothers. MAMA already reaches more than 1.5 million women through country programs in Bangladesh, South Africa, and India, says the organization’s executive director Kirsten Gagnaire, but the partnership with Internet.org has the power to dramatically expand that reach.

Gagnaire says she must typically fight with phone carriers to provide health information to mothers at little to no cost. Facebook has the bargaining power to ensure the information is free. In Zambia, for example, the local carrier Airtel is providing free access to Internet.org. Airtel’s hope is that that users will eventually buy pre-paid data through their service to access information on the Internet beyond that provided by the app.

MAMA executives know from their work in other countries that there is an acute need for the information they provide through Internet-connected devices. More than half of the program’s users spend 30 minutes or more on the website every time they use it, the group says. The information is also having an impact on child care. According to a survey the group conducted last year, 69% of MAMA users attended at least four care visits with their child after their pregnancy. In Bangladesh, for example, the national average is 32%.

Skeptics have portrayed Facebook’s Internet.org initiative as a ploy to get more users for its namesake service. By making the Internet.org app free in Zambia, Facebook will likely attract new customers. But Sandberg insists that critics are missing the larger picture.

“No one is saying that getting the next group of people online doesn’t one day also help Facebook’s business,” Sandberg says. “But if you were actually prioritizing helping Facebook’s business, boy do I have a lot of ad products that these engineers can build that we need in the market.”