The Disunited States of Europe 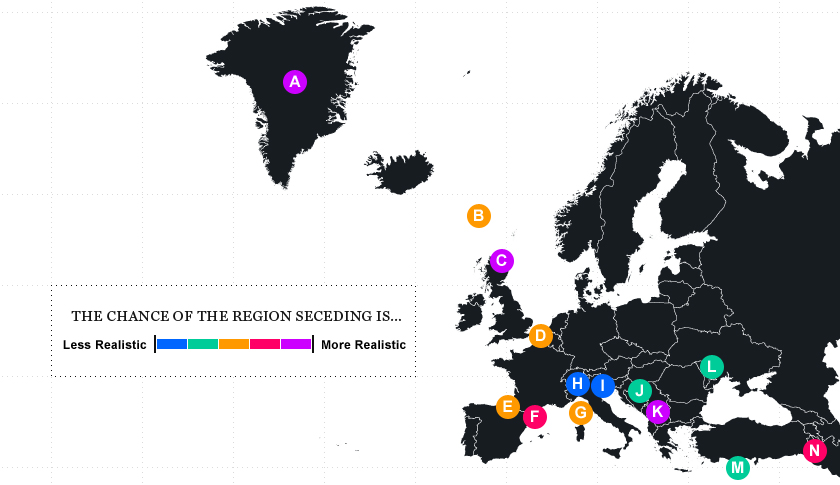 In the movie Braveheart, the 13th-century Scottish warrior William Wallace (in the form of Mel Gibson) gallops across the green Highlands exhorting people to fight the English and shouting in Gaelic, “Alba gu bràth!” or “Scotland forever!” Seven hundred years after that conflict, passions are running high again, as about 5.2 million Scots prepare to make their most crucial political decision in memory on Sept. 18: whether to declare their independence from Britain. It’s a vote that could rip apart Europe’s third-biggest economy and jolt nations across the region. Much as in Wallace’s time, the issue pits the dreamers against the doomsayers (minus the bloodshed) and threatens to end an alliance that has lasted for centuries. “Scotland has been a nation for a very long time,” says Duncan Ross, a professor of economic history at the University of Glasgow. “We should have the right to decide how to rule ourselves.”

Perhaps so. Yet for Europe the question is, At what price? The intense nervousness over how the Scots might vote extends far beyond the territory’s rugged mountains. Many in Europe fear that Scotland’s independence fervor could ripple across the continent, where a number of separatist campaigns have simmered for years. The hotspots range from the mountainous Basque region at the border of Spain and France to the Mediterranean island of Corsica to the lowlands of Belgium, where many in the Flemish majority want to say tot ziens to their French-speaking countrymen. Some of these movements have a history of violence; several more seem merely rhetorical—and, well, quixotic (independent Venice?). But taken together, the sovereignty pushes are yet another reminder of how tenuous the notion of one cohesive “European Union” truly is (see graphic below).

Scots who favor splitting off from Britain “are fighting for something they believe in,” says one professor. “There is an asymmetry of passion.”

The sense of Europe splintering at the edges has deepened with the soaring popularity of anti-EU parties like France’s National Front and Britain’s Independence Party, which want their countries out of the Union. And even if Scotland’s independence vote fails, Britain could be forced to offer Scots far greater autonomy, including perhaps more control over their budget—something that could further complicate the EU’s already plodding economic policymaking. With each new voice at the table, says Steven Blockmans of the Center for European Policy Studies in Brussels, “it becomes more and more difficult to align everyone’s interests.”

When British Prime Minister David Cameron agreed in 2012 to a Scottish referendum on independence, the odds seemed remote that voters would choose to split from Britain after 300 years of albeit awkward union, abandoning the U.K.’s modern military and its permanent seat on the UN Security Council. Yet as the vote has drawn nearer, Scots increasingly seem eager for far-reaching change, with recent polls putting the ditch-Britain vote at 40%. “People on the yes [for independence] side are fighting for something they believe in passionately, while on the no side, the feeling is, ‘Why change countries?’” says John Curtice, professor of politics at Strathclyde University. “There is an asymmetry of passion.”

Those in favor of independence say that Scotland should commit a portion of its North Sea oil earnings to funding public health, pensions, and education—as oil-rich Norway does—rather than let British lawmakers divvy it up. Supporters also say they’d evict the Trident nuclear submarines stationed on the Clyde River should there be a split. Sure, a new Scotland would be small. But it would still dwarf several other EU countries, including Malta, Cyprus, and wealthy Luxembourg (pop. 530,000). “This notion that you have to be part of a big country is just not true in the EU,” Ross says. “Some of the most successful EU countries are small, like Denmark. And if some of our decisions turn out not to be right, we’ll deal with it.”

Whatever the outcome of Scotland’s vote, few places will feel its impact as strongly as Spain’s autonomous Catalonia region 1,000 miles away. With 7.5 million Catalans speaking their own language and running a large economy in northeastern Spain, the separatist politicians in Barcelona command huge support. Spanish Prime Minister Mariano Rajoy has vowed to block Catalan plans for a Nov. 11 independence referendum and to ignore the results.

So far, Rajoy’s tough talk has helped stoke separatist feelings in Barcelona, with pro-independence parties arguing that recession-hit Spain sucks away Catalan resources. “Catalonia suffers fiscal drainage of €8 billion to €11 billion a year, if not more, from Spain,” says Manuel Manonelles, director general for European and Multilateral Affairs in Catalonia’s government. Like other Catalans, Manonelles sees answers to their political frustrations in one far-off place: Scotland. “The British people are giving a good example of democratic spirit” in allowing Scotland’s vote, he says. “We’re watching the referendum closely.” So, too, is the rest of Europe.