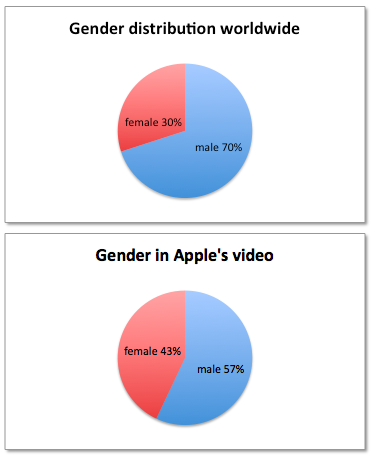 Apple deserves whatever plaudits it’s getting for releasing demographic data that show, as CEO Tim Cook acknowledges, that the company has a long way to go.

Given that its competitor are no better and probably worse at attracting women, Hispanics, Asians and Blacks, it feels somewhat uncharitable to pick on the promotional material that accompanied the report.

But I couldn’t help notice that roughly 12% of the faces in the video Apple released Wednesday are black and nearly 45% are women. The company’s actual ranks are considerably less diverse, especially in its tech and leadership positions.

For example, even with the recent additions of Susan Wagner and Angela Ahrendts, women represent only 25% of its board of directors and 10% of its executive team.