Anatomy of a rumor: Did China really ban 10 Apple products? 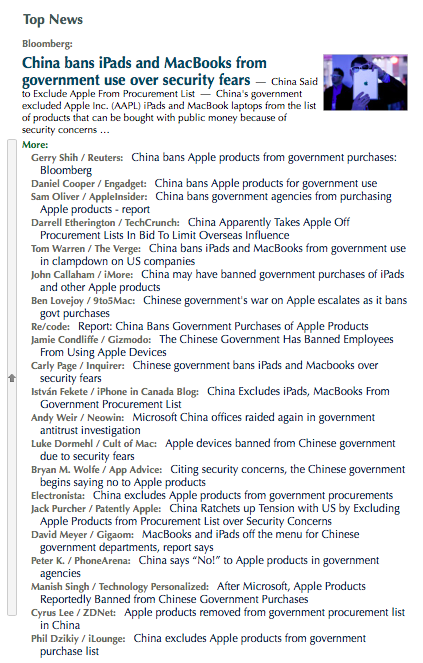 The lead story on the closely watched Techmeme news aggregator Wednesday was from Bloomberg News: China bans iPads and MacBooks from government use over security fears.

According to unnamed Chinese government officials, Steven Yang and Lulu Yilun Chen reported, China for security reasons had dropped Apple’s iPads and MacBook laptops from the list of products that could be bought with public money.

Such a ban would have impact. China is the world’s biggest market for electronic devices.

And the story seemed to echo China Central Television’s dubious claim last month that the iPhone’s Favorite Locations feature could result in the leak of state secrets — a claim that Apple promptly and respectfully denied.

By noon U.S. time, Bloomberg’s story was headline news on CNBC and had been picked up by nearly two dozen wire services and tech blogs, from Reuters to Cult of Mac.

Some reporters were careful to attribute the story to Bloomberg, or at least to hint that the news was second-hand.

Others, including Gizmodo’s Jamie Condliffe and Engadget’s Daniel Cooper, posted headlines that treated the ban as fact. China says “No!” to Apple products in government agencies was Peter K.’s snappy headline on iPhoneArena.

Still others added their own spin:

Jack Purcher / Patently Apple: China Ratchets up Tension with US by Excluding Apple Products from Procurement List over Security Concerns

As you may have guessed by now, serious questions have been raised about almost every aspect of the story. According to a Chinese language report via Caixin, there was no Chinese government ban, there was no security issue, and the procurement list on which Bloomberg hooked its news story was four months old.

MacDailyNews has the scoop:

No, China has not ‘banned Apple products from government purchases’

UPDATE: Reuters reported Friday that China’s chief procurement center has refuted Bloomberg’s claim. Bloomberg is standing by its story, but not quite as firmly as it once did.