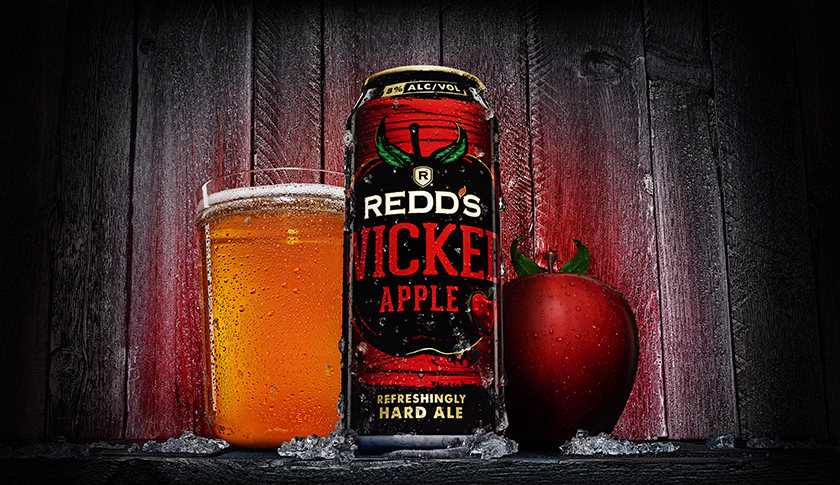 “An apple a day” is not just a nutritional myth. This fall, it’s a rally call by some of the world’s top brewers.

Anheuser-Busch InBev (BUD) and MillerCoors are beginning to stock shelves with the latest apple-flavored line extensions of their flavored malt beverages, called the Apple-Ahhh-Rita and Redd’s Wicked Apple, respectively. Both pack a pretty strong punch: with an 8% alcohol by volume, also known as ABV.

Flavored malt beverages, called FMBs, are beers that are either mixed with another alcoholic drink, such as a spirit, or could be a mixture of beer with some sort of flavoring or mixer, like lemonade.

Though FMBs represent a small sliver of the overall beer/malt beverage volume in the U.S., growth for the segment has been stronger than craft beers. According to Nielsen, which tracks sales at food-and-drug stores and many other retailers, FMBs have 4% of the overall malt-based alcoholic beverage volume in the U.S., but are contributing 31% of volume growth based on the total of all segments that are posting growth.

Beer insiders say the brewers’ FMBs are a nod to a few key trends in the alcoholic beverage space. Consumers, particularly Millennials, are demanding higher ABVs in their beers, as well as more flavorful concoctions. Ciders are also becoming increasingly popular.

“There is this propensity to go for higher ABV, or drink wine and spirits,” said Amin Alkhatib, alcoholic drinks analyst at Euromonitor. “Brewers are looking to exploit that by launching higher ABV beers or malt beverages.”

Tyler Simpson, marketing director for Bug Light’s line extensions, said the 2012 launch of the Bud Light Lime Lime-A-Ritas was the company’s first foray to blend the beer and cocktail world under that brand. Since then, more flavors have hit shelves and Simpson says the brewer has courted a broad consumer base with the offerings.

And why did Bud Light go with apple for its latest launch?

“In this time of year, the cider segment really takes off,” Simpson said. “We’ve seen that category grow the last couple of years and we thought there was an opportunity to put our own spin on that space.”

InBev’s Ritas are also taking aim at the cocktail culture by encouraging consumers to mix and match the drinks with other ingredients. Spirits have been stealing market share for years from beer in the U.S., and major brewers are starting to confront that threat.

“[Redd’s] is how we are defending ourselves against spirits,” said Jenna Shklyar, a MillerCoors brand manager. “This is our way to gain back market share and for us to attract Millennial consumers.”

Redd’s first hit shelves nationally in early 2013 and Wicked Apple, the third variety in that franchise, has the strongest ABV. MillerCoors says apple is an ideal flavor for the company to play in, as Mike’s Hard Lemonade and Twisted Tea are already entrenched in other popular FMB flavors.

“Consumers are looking for the apple profile and flavor–cider and FMBs are a good fit,” Shklyar said.

Both Anheuser-Busch InBev and MillerCoors are planning splashy ad campaigns this month to promote their latest FMBs. At MillerCoors, the commercials developed by ad agency Cavalry are taking a direct swipe at the spirits industry. Anheuser-Busch InBev’s ads are part of a larger Bud Light Lime Ritas “Fiesta Forever” campaign that kicked off last month.

Though the Ritas and Redd’s brands are fast growing, alcoholic beverage experts say the flavor innovation underway at the big brewers are still at an early stage, as those companies try to figure out what younger adults want when they order a drink.

“Millennials are seeking unique offerings that blur the line across beverage alcohol categories,” said Andrea Riberi, senior vice president of alcoholic beverages at Nielsen. “There is this big beer cocktail trend and we expect to see that continue as Millennials look for new flavors.”