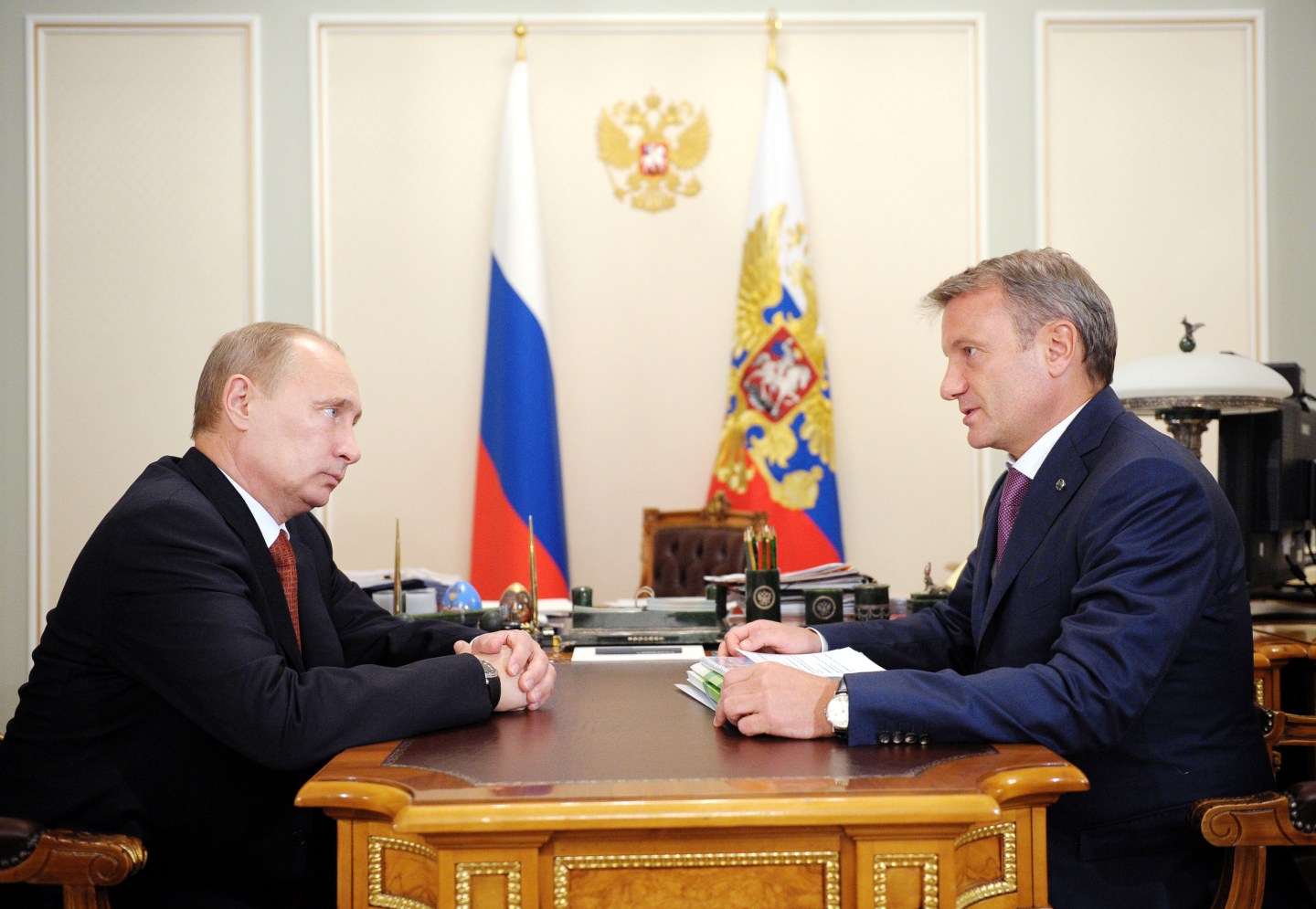 The chorus of protest from Russia’s banks against U.S. and E.U. sanctions on them grew ever louder Friday, as the country’s largest institution said they were undermining the very foundations of the global financial system.

OAO Sberbank, by far the country’s largest bank, reacted with indignation to the E.U.’s inclusion of it the list of banks forbidden from using European long-term capital markets, saying it has “no connection to geopolitical processes”, and that the measure “won’t allow the European crisis around Ukraine to be resolved.”

The measure, which coincided with the worst sell-off in global stockmarkets so far this year, “destroys the basis for the functioning of the global financial system,” Sberbank warned, echoing complaints by VTB chief executive Andrey Kostin two weeks ago, when his bank was first hit with sanctions.

Expanding sanctions to Sberbank is a further indication of how far Europe’s previously timid stance towards Russia over its role in the Ukraine crisis has developed since the downing of Malaysian Airlines’ MH17 flight, killing 298 (mostly European) civilians.

It suggests officials no longer care about sparing a bank they had been reluctant to touch it because of its systemic importance: with 106 million customers, 43% of Russia’s retail deposits and a third of its loans, it’s by far the biggest intermediator of savings and investment in the country.

In addition, Sberbank also operates banks in the E.U. and has a good deal of political capital there, having helped the Austrian government out of a tight spot by buying the central and eastern European assets of Volksbanken AG when it collapsed five years ago.

Lastly, Sberbank is headed by German Gref, one of the most prominent liberals at President Vladimir Putin’s court, who has for 14 years been considered a force for good and modernisation in Russia, even as Putin clamped down on civil rights at home and destabilised neighbors such as Georgia and Ukraine.

Sanctioning it suggests the E.U. now thinks there is little to be gained by a differentiated approach to those perceived as liberal, like Gref, and former KGB officers like VTB’s Kostin–even if that exposes European banks operating in Russia to retaliatory measures.

Analysts still say it’s unlikely that sanctions will have an immediate impact on the Russian economy, except through undermining business and consumer confidence.

The monthly purchasing managers’ index for Russia in July, compiled by HSBC and Markit, was surprisingly strong, suggesting that the economy grew for the first time in eight months.

However, HSBC’s chief economist for Russia, Alexander Morozov, warned that the recovery was fragile and that geopolitical tensions “will not allow manufacturers to sustain output growth in the coming months.”

Elsewhere, France’s Societe Generale SA (GLE), which already wrote down its investment in Russia by €525 million in the first quarter, said Friday its profits in Russia fell by a third in the three months to June.

Confidence continued to ebb out of Russia’s financial markets on Friday, albeit less sharply than might have been feared given the sell-off in global markets Thursday.

The ruble fell to its lowest level against the dollar in nearly three months, while the benchmark MICEX stock index fell 1% to be close to a three-month low. Sberbank’s depositary receipts were down 2.7% in London.