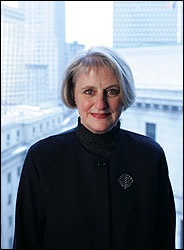 The $450 million deal Apple cut last week has hit a roadblock: Denise Cote, the U.S. district judge who ruled last year that Apple had illegally conspired to fix the price of e-books.

As we reported last week, Apple bargained with the plaintiffs — 32 states and a class of e-book readers — as if it expected a partial victory if not a clean reversal on appeal.

According to the plaintiffs, it was the best deal they could get.

In a teleconference Thursday, Judge Cote made it clear that she had serious problems with both the language of the settlement and its terms.

What she found “most troubling,” according to the transcript, was the “very, very steep discount” spelled out in the settlement if the case comes back to her. Why, she asked, would Apple pay only $70 million — $50 million to consumers, $20 million in fees.

“I have a very serious question about whether the payment of just $50 million to consumers can be justified,” she said.

She also expressed concern that if payments are delayed, consumers who change their e-mail addresses might not get their share.

None of the lawyers pointed out that by asking for new terms, the judge herself was delaying payment.