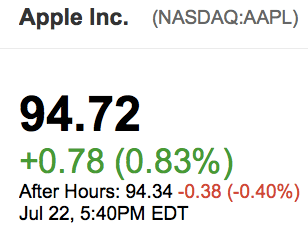 Wall Street is going to need some time to sort out Apple’s third quarter results.

iPhone sales were up year over year — to 35.2 million — but not as much as the Street expected. iPad sales, at 13.3 million, were lower than expected. And Mac sales, at 4.4 million, surprised just about everybody.

The company also announced a cash dividend of $0.47 per share, payable August 14.

“Our record June quarter revenue was fueled by strong sales of iPhone and Mac and the continued growth of revenue from the Apple ecosystem, driving our highest EPS growth rate in seven quarters,” said Tim Cook in a press release.

“We generated $10.3 billion in cash flow from operations and returned over $8 billion in cash to shareholders through dividends and share repurchases during the June quarter,” said Luca Maestri, Apple’s CFO. “We have now taken action on over $74 billion of our $130 billion capital return program with six quarters remaining to its completion.”

The conference call with analysts began at 5 p.m. ET (2 p.m. PT). Seeking Alpha has a transcript.

Notes from the conference call: