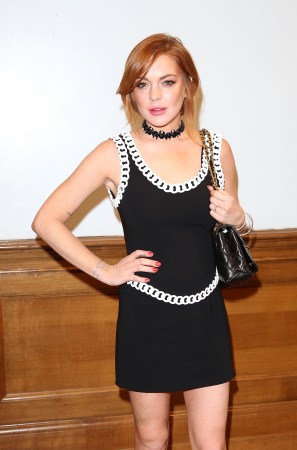 Lindsay Lohan is finally following through on threats to sue the makers of the popular video game Grand Theft Auto V which, she claims, includes a character based on her likeness.

In a lawsuit filed Wednesday in Manhattan Supreme Court, Lohan accused Rockstar Games and its parent company, Take-Two Interactive, of basing the video game’s “Lacey Jonas” character – portrayed in the game as a famous young actress who is trying to avoid paparazzi – on Lohan’s voice and likeness without the actress’ permission, according to multiple news outlets.

The suit claims GTA V ripped off everything from Lohan’s image to her clothing line, hair style and lifestyle. The game includes one scene in particular where the Jonas character tries to evade paparazzi staked outside of a hotel based on the Chateau Marmont in West Hollywood, which famously banned Lohan in real life after the actress racked up thousands of dollars in unpaid bills, according to Page Six. In the game, the Jonas character attempts to explain to another character who she is and why she needs to escape, exclaiming: “I’m really famous. I didn’t do anything!”

The wildly popular game, which was released in September, generated more than $1 billion in sales within three days of its release – the fastest rate of any entertainment product ever released.

Take-Two (TTWO) declined to comment about the lawsuit. A company spokesman did not immediately respond to Fortune’s request for comment.

Reports surfaced all the way back in December that Lohan was looking to bring civil action against Rockstar and Take-Two over GTA V allegedly using her likeness. Lohan has also reportedly taken issue with the game’s cover, which features a blonde woman who resembles Lohan holding a cellphone and wearing a skimpy bikini.

In addition to her extensive and highly publicized criminal history, Lohan is also no stranger to civil court proceedings. The actress unsuccessfully sued hip hop artist Pitbull for defamation last year over a song that includes a negative reference to Lohan in its lyrics. A judge threw out that suit, ruling that the song is a work of art that is protected by the First Amendment. Lohan previously found success suing E-Trade (ETFC) over its 2010 ad that featured a baby referred to as a “milkaholic Lindsay.” Lohan settled that $100 million suit for an undisclosed amount.

Rockstar and Take-Two are also currently defending a similar ongoing lawsuit brought earlier this year by former “Mob Wives” star Karen Gravano, the daughter of Salvatore “Sammy the Bull” Gravano. Her $40 million suit also claims GTA V based one of its characters on her likeness and life story.