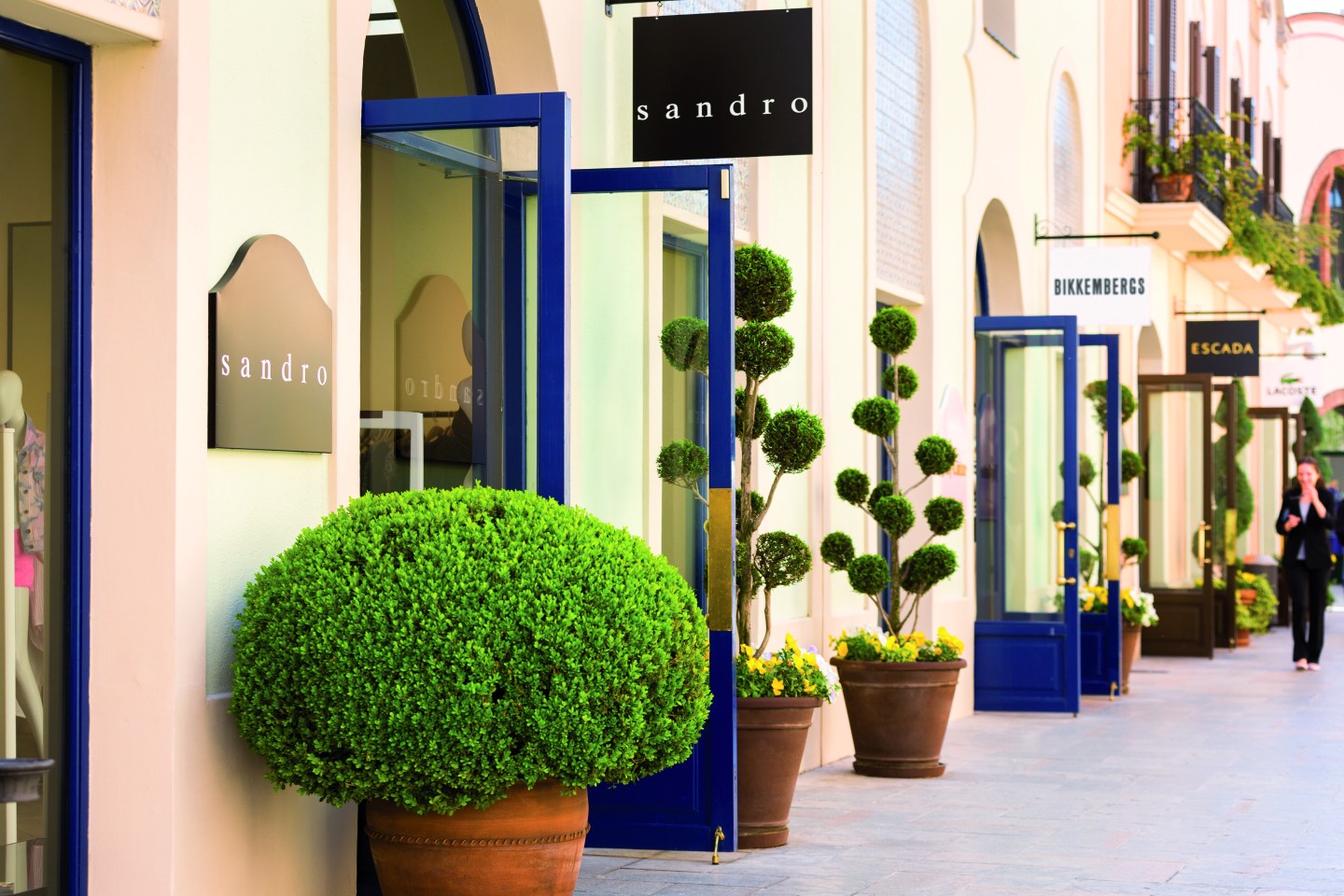 La Roca del Vallès was once little more than a sleepy Catalan village (pop. 7,000) surrounded by farmland, 35 minutes northeast of Barcelona. Now, that farmland is the home of outlet mall La Roca Village, a purpose-built simulation of a Catalan town, packed with high-end outlet stores.

Travelers have always shopped, for handicrafts, unfamiliar foods, or silly t-shirts. But in recent years, as citizens of BRICS nations and other developing countries have begun to travel, vacation shopping has changed. For many newbie travelers, buying brand-name goods has become a central point of tourism, a way to participate in developed world consumerism and show the folks back home they’ve indeed been abroad.

The boom has been most notable among Chinese travelers, who’ve celebrated their new ability to globetrot with sights-and-malls bus trips across the U.S. and shopping-heavy versions of the old Grand Tour of Europe. Next year, Chinese travelers are expected to buy more luxury goods abroad than tourists from all other countries combined.

But shopping tourism is far from a Chinese phenomenon, and Spain in general—and Barcelona in particular —offers an object lesson in how visitor flows from developing countries have changed the face of tourism.

Spain ranked second in the world in 2012 for revenue from tourism spending, according to a new report from the UN’s World Tourism Organization, with $1.1 billion spent on shopping in the country by visitors from outside the E.U. And Madrid and Barcelona were tied for second, behind London, in a shopping index ranking of European cities put together by the Economist Intelligence Unit and Global Blue, a tourism shopping tax refund company.

“Because brands are so global and because emerging markets are emerging, there are aspirational factors,” says Michael Goldenberg, the New York-born head of the Spanish operations of Value Retail, which owns the La Roca mall and eight others in Europe. “Why are they all coming to Europe on vacation? To see where culture and sophistication come from. And they want to live like Europeans. Part of that is fulfilled by buying brands.”

Goldenberg was working in real estate investment banking at Bankers Trust when the firm invested in Value Retail’s first shopping village, Bicester Village in the U.K., and he joined the company in 1996, at age 27.

As we walk down the central avenue of the mall, the lanky Goldenberg points out the architectural details that mimic small-town Catalonia.

We start our tour in the central plaza surrounded by government-style buildings (a Loewe outlet sits on the ground floor of the town hall), then pass through a comfortable bourgeois neighborhood and into a very tidy version of a factory zone. The streets are covered in cobble or large paving stones, the roofs are tiled, the colors tend toward the creams, and the plazas between the blocks feature sculptures in the style of Antoni Gaudí.

This architectural recreation offers the sensation of a local cultural experience, which may be key for visitors who are passing a sizable chunk of their vacation at the mall. Sixty percent of the shoppers are tourists and they spend an average of four hours here, Goldenberg says. Value Retail’s others malls also simulate the local culture: the English mall near the Cotsworlds, outside Oxford, mimics a village in southeastern England, while one near Parma, Italy is based on Verdi’s operas.

“It’s supposed to be comfortable. It’s vacation. When you relax, you have fun,” Goldenberg tells me.

The mall is also designed as luxury-on-training-wheels to make developing country tourists feel comfortable among high-end brands whose stores might normally intimidate them.

“We try to democratize luxury,” Goldenberg tells me as we walk through the industrial section of the town. “Notice all the doors are open? At a luxury store on Passeig de Gracia [Barcelona’s equivalent of Manhattan’s Fifth Avenue], the doorman sort of looks you over before he opens the door.”

Value Retail identifies major cities with sophisticated locals and plenty of tourists, and then builds a mall far enough outside of town so as not to compete with the brands’ full-price city stores. In Barcelona, the mall is 25 miles outside the city; in London, it’s 75 miles.

When it opened, many expected La Roca Village to fail. It was in the middle of nowhere and outlets were an unproven concept. The first years were indeed slow; 270,000 people came during the six months it was open in 1998, less than 10% of the number that visited in 2013.

But as outlets caught on in Europe and tourism in Barcelona boomed—7.6 million visitors stayed in the city last year, up from 2.5 million in 1993—so did the mall.

The portion of La Roca’s shoppers who are tourists increased from 38% in 2007 to 60% today, and in 2009, the mall launched a bus service from downtown Barcelona. It now offers ten 20-euro round trips a day. A just-opened 30 million euro expansion led to the addition of 40 new stores at the mall. A recent job fair offering 300 jobs at the center attracted 1,500 aspirants. And Chinese tourists are beginning to come en masse: Barcelona got about 150,000 Chinese visitors last year, Goldenberg says, and 100,000 of them came to La Roca Village.

Goldenberg would not break out the Spanish mall’s sales, but he said the combined revenues in all Value Retail malls was 1.9 billion euros in 2013.

The parent company is now taking its shopping experience to the developing nations that supply so many of its customers. In May, Value Retail opened its first mall in China, in Suzhou. In keeping with its tenets of local design and European aspirations, the architecture blends Chinese artisanship with a touch of Italian style.