U.S. vs. Belgium: A battle over beer, fries and soccer 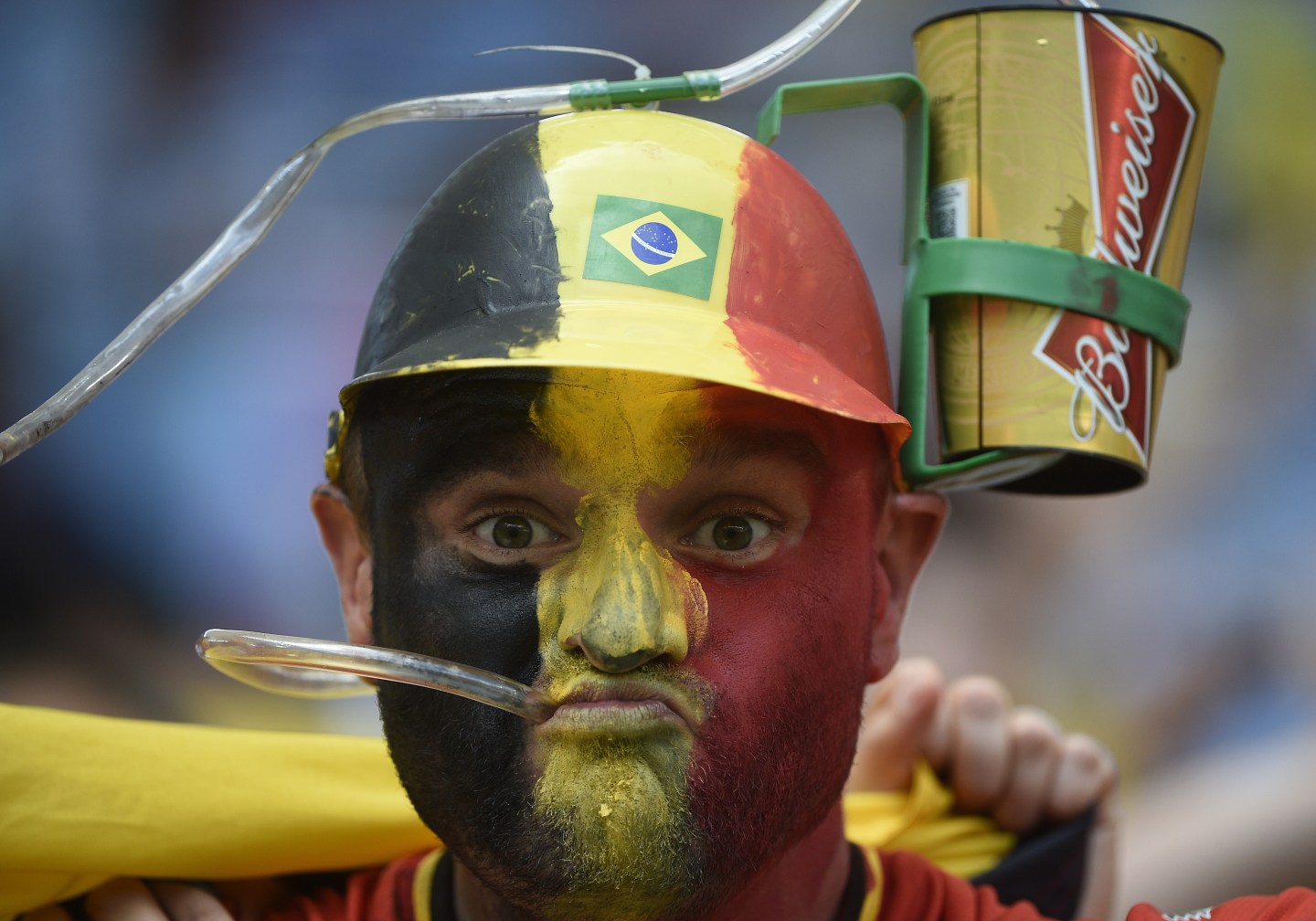 A Belgium's fan drinks beer as he waits for the start of the Group H football match between Belgium and Russia at the Maracana Stadium in Rio de Janeiro during the 2014 FIFA World Cup on June 22, 2014. AFP PHOTO / MARTIN BUREAU (Photo credit should read MARTIN BUREAU/AFP/Getty Images)
Photograph by Martin Bureau — AFP/Getty Images

The U.S. is set to face Belgium on Tuesday in the World Cup round of 16, so there’s no better time to compare the two countries.

We’re not talking about how they stack up on the soccer field. That will be clear soon enough. We’re focused on quirkier comparisons, like who drinks more beer and eats more French fries. Belgium is, of course, known for both. But Americans are pretty good at swilling Budweiser and gorging on fast food. National pride is at stake here. May the best country win.

This one’s pretty close. Americans like their beer and so do the Belgians. Per capita, Americans drank 77.1 liters in 2012, according to a report by Kirin Brewery Company (they’re Japanese owned, so they’re neutral, just like World Cup referees). That ranks us 14th on the global beer-guzzling list (the Czech Republic tops it with 148.6 liters per person). Belgium, meanwhile, was ranked 18th with a per capita consumption of 74 liters. We win, but we have to give our Belgian friends this: Their beer is a whole lot better than Bud.

Just to set expectations here: French fries are essentially Belgium’s national dish. And Belgium invented them, if you believe the experts. In any case, Belgians, per capita, consume a third more French fries than Americans, according to The Wall Street Journal. It’s no wonder. They typically eat fries with a mayonnaise-based sauce, which is pretty tasty compared to our dip of choice, ketchup. That’s gotta be a goal for Belgium.

Take a look at Twitter and some U.S. fans are even saying they’ll boycott Belgian delicacies in honor of the Tuesday game. The food of choice? Waffles.

Putting the beer and fries aside for a moment, breaking down the soccer numbers offers some interesting insight ahead of the big game.

For instance, according to FIFA there are 24,472,778 soccer players in the U.S (only China has more), and the U.S. has 9,000 clubs and 796,300 officials. Belgium’s numbers are pretty paltry by comparison: The European country — which ranks between Madagascar and Côte d’Ivoire in terms of the number of soccer players — comes in at 816,100 players in total, including 2,059 clubs and 79,645 officials. To put the numbers in perspective, however, the U.S. has about 318 million inhabitants, while Belgium has just over 10 million, according to the CIA’s 2014 estimates.

With the U.S. taking the GDP and soccer stats, Belgium has us beat in the fries and beer (quality) departments. We’ll take it as a tie.