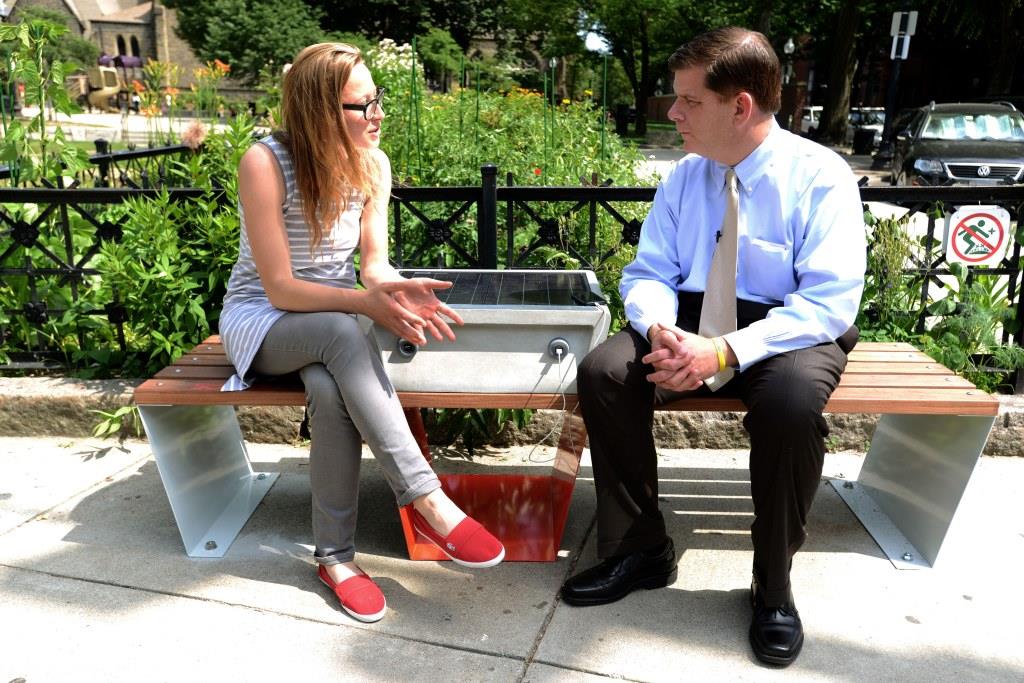 Benches in several Boston parks are about to get a little fancy.

Through a partnership with a Massachusetts Institute of Technology Media Lab spinoff, Changing Environments, the city announced Friday that it is set to rollout solar-powered benches in several of its parks that allow you to charge your cell phone. The bench has a USB outlet, but it’s up the visitor to bring his or her own cable to plug in the phone. The benches also collect and share a range of data, including location-based information, as well as air quality and noise-level data.

The high-tech benches named “Soofas” will be deployed in green spaces over the next week including Titus Sparrow Park in the South End, the Boston Common and the Rose Kennedy Greenway. The Soofa debuted last week at the White House Maker Faire in Washington, D.C., a gathering of innovators and entrepreneurs.

“Your cell phone doesn’t just make phone calls, why should our benches just be seats?” said Mayor Martin J. Walsh. “We are fortunate to have talented entrepreneurs and makers in Boston thinking creatively about sustainability and the next generation of amenities for our residents.”

Changing Environments Inc. is a Verizon Innovation Program partner and uses Verizon’s 4G LTE network to connect its benches wirelessly to the Internet and upload location-based environmental information. The first units in Boston will be funded by Cisco Systems (CSCO).

“Soofa is the first step into Smart Urban Furniture. The possibilities to update the city for the mobile generation are endless and long overdue,” said Sandra Richter, Co-founder and CEO of the young startup. “So are more female-lead startups which is why we hope to be a roll-model for women all over the world to found cool companies like Nan Zhao, Jutta Friedrichs and I did.”