How to bet on the price of water 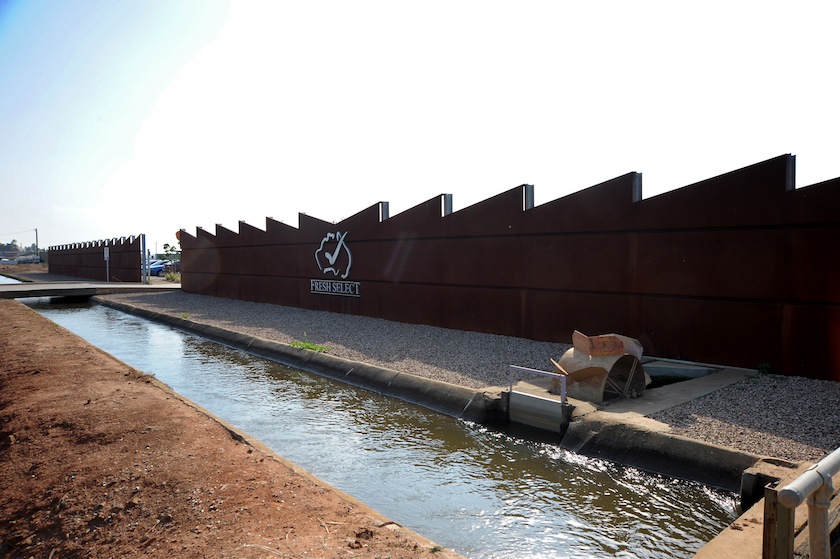 “Get me 100 megaliters of August Poland Springs at the thousand handle”—a trader near you may be squawking this into his box soon.

The launch of a new futures exchange in Australia is the latest sign that water is becoming a speculative commodity, just like crude oil.

Since it opened in late March, 1.6 million Australian dollars in forward contracts representing about 16.5 billion liters of water have changed hands on Waterfind’s online market. That’s a drop in the ocean of global reserves, but it’s a significant symbolic step in the gradual “commodification” of water.

Critics and proponents of water markets alike say the emergence of a futures market could change how people perceive water, transforming it from a free and common property, like the air we breathe, to a dollar-denominated commodity like the stuff we dig out of the ground.

With Waterfind, a trader can now buy water for delivery at a given date. Some investors buy water contracts to gain exposure to agricultural commodities in general, says Tom Rooney, co-founder and chief executive of Waterfind.

“They can continue to hold that right to take delivery of water in a particular system, or sell that right for a greater price,” says Rooney. “It’s just like buying orange-juice concentrate futures or pork bellies. You could actually take physical delivery of pork bellies, and eat a lot of pork bellies….” Or you could sell your contract at a profit.

Agricultural and oil futures contracts have traded for centuries the world over, though commodities markets grew significantly in both size and influence after the global oil spikes of the 1970s.

Waterfind was founded in 2003 in Adelaide, South Australia, because “it’s the driest state in the driest continent on earth,” says Rooney. Oodnadatta, site of the highest recorded temperature in the Southern hemisphere, is in South Australia and much of the state gets less than seven inches of rain a year.

Large parts of the American plains and West are starting to look more like South Australia, and droughts in parts of Texas and California may soon rival the decade-long event in Australia in the 2000s. Rooney’s futures market could work well in these regions, but Australian water markets are more developed. The constant scarcity of water there heightens the value—both spiritual and financial—of H2O.

A 1994 Australian regulation separated land and water rights, much like what had happened during the settlement of the American West. This allowed landowners to sell access to water on their land more easily and opened the way for the growth of water markets.

These water rights are traded on Waterfind’s website and on other water exchanges in Australia. Rights owners can sell access to their water on a temporary or permanent basis. In both circumstances, the contracts are priced per megaliter, where each megaliter represents a million liters. On a temporary contract, the buyer has the right to consume the designated volume of water in the 12 months following the delivery date. On a permanent contract, where the prices are much higher, the buyer can consume the designated volume every year in perpetuity.

While water trading takes place in the U.S. and other parts of the world, Australia is unique in that it made markets an explicit part of its national water-conservation initiative in 2004. Original water rights must be registered with the Australian states, which limit the aggregate drawdown of supplies, leading some to describe Australia’s initiative as a ‘cap-and-trade’ program. The Australian government has also “bought back” water rights at market prices in a sort of aquatic version of America’s National Petroleum Reserve.

Bob O’Brien, an economist and founder of consultancy Percat Water, estimates that around A$1.5 billion worth of water has traded in the last couple of years.

Rooney of Waterfind estimates that about A$300 million to A$400 million of water is owned “purely for investment purposes,” some of it by U.S. firms.

Rooney was born into the water business. His father, Craig Rooney, was a water broker. In the Waterfind office, Rooney keeps a 1973 document recording of one of the first transactions his father arranged. Craig Rooney had to knock on the doors of farmers and landowners to arrange the transfer of water. “Everything was manual—manual contracts, and really complex government systems to go through,” Rooney says.

When Rooney the younger took over the family business, he realized the antiquated water brokerage business could benefit from electronic stock and commodity market methods. That’s why he started Waterfind. Now, a transaction that would have taken his father’s brokerage four months to complete can settle on Waterfind’s site in 30 minutes, Rooney says.

To launch its forward or futures market, the Australian parliament had to pass new legislation. The day the bill passed, March 20, was the day of the market’s launch.

Up until then, brokers and exchanges like Waterfind had allowed landowners and “irrigators,” or farmers, to buy and sell rights with immediate effect on the “spot” market. Farmers would purchase the rights per mega liter, and then surrender them back to the landowner after a certain amount was consumed.

The ability to trade futures without having to worry about taking physical delivery of the water could draw more speculative investors into the market. So far, Rooney estimates about four out of every five people who trade in Waterfind’s forward market are farmers or landowners while the rest are investors and traders.

For farmers, the addition of futures to the exchange is supposed to provide the kind of peace of mind that came with cotton and corn futures. Rather than gambling on where the price will be at harvest or irrigation time six months from now, farmers like to lock in prices by buying or selling a futures contract.

“Just as for these other markets, there is a lot of volatility in the water market,” says John Briscoe, professor of environmental engineering at Harvard University and a former World Bank executive who is considered an authority on water issues. “Futures markets … are one—often very important—instrument for both buyers and sellers to manage risks more effectively.”

Waterfind’s service works much like any other electronic futures exchange, with a few twists. The firm does not have a formal clearinghouse, as U.S. exchanges do, but one of its units acts in that capacity. The wide variety of custom delivery dates, locations, and prices on the contracts recall what’s known on Wall Street as a “bespoke, over-the-counter” derivatives market, where banks design financial contracts to specific requirements of the buyers or sellers. Unlike those markets, however, Waterfind displays quotes to all parties—one of the defining traits of an exchange. Waterfind also acts as a broker on some of the trades, though the majority of its clients now trade on their own.

For the user, the experience is just like that of an electronic oil-trading market. You join the exchange, handing over your banking details. On your screen, you see two columns of contracts—buy and sell orders—with the price per mega-liter, date of delivery, and rough location of the water source. Each column has its own command button so you can click “buy on order” or “sell to order.”

For example, a recent quote on the forward market showed a sell order for 45 megaliters of water on a temporary supply with a delivery date of Sept. 1 and a price of $100 a megaliter in the 1A Central Goulburn Irrigation Area of the Goulburn Murray region of the state of Victoria. Once you click on the command “buy on order,” Waterfind will take a deposit of 20% of the value of the water out of your account—much as other futures exchanges require a “margin” payment upon opening a trade. The balance is payable 14 days before the delivery date. As a speculator, of course, you will hope to have sold out of your position long before then.

If you were a farmer who wanted to take delivery of the water, your land would have to be in the specific area named on the contract on Sept. 1. Waterfind’s software would ensure the water you bought was deliverable.

According to data supplied by Waterfind, the average spot price of temporary water rights in the 795 irrigation regions in Australia has bounced between roughly $10 and $85 a megaliter for the last three years. Some of the highest volumes of water to date traded in Australia during those years. But the price peaked in October 2007, at the nadir of the drought that lasted from 2005 to 2009. The national average price that month was $1000 a megaliter, says Rooney.

While the ground and surface water available for use in Australia shrunk by more than half during that drought, agricultural production only fell by less than one third. Some people—including Rooney—say that proves water markets work. The idea is that by putting a price on water, the markets ensured that less was wasted. Farmers on irrigated land produced more food per acre while using less water. “(On) free and open markets, people could then realize the value of water and water shifted to highest productive use,” Rooney says.

Frederick Kaufman, the author of Bet the Farm: How Food Stopped Being Food, says the history of commodity and derivatives markets throws some, ahem, cold water on this argument. He has warned that water derivatives and speculation could cause price spikes and even exacerbate droughts, just as grain and energy futures have wreaked social havoc in the past. “We saw what derivatives did for mortgage-backed securities. We don’t want them doing that for water,” Kaufman told Wired.com.

Rooney says that Kaufman’s alternative—leaving it to government agencies to allocate water—would not yield the efficiencies he attributes to water markets.

Ole Amundsen, a program manager for the Conservation Fund who is familiar with U.S. water issues, says non-governmental organizations are already trying to harness market forces for water conservation in the U.S. For example, he says, a California attorney named Tom Hicks is trying to gain similar tax benefits for donated water rights as those that the Internal Revenue Service applies to land-trust donations. This would give water rights a financial value without letting speculators run amok.

Amundsen says the Australian futures market is unlikely to spread to the U.S., partly because of the diverse water-rights laws throughout the U.S. But Waterfind plans to launch U.S. operations in January 2015.

As Kaufman and others have noted, once the genie is out of the (water) bottle, there is no telling where a market will go.