In Maryland, a major push to become a 3D printing hub 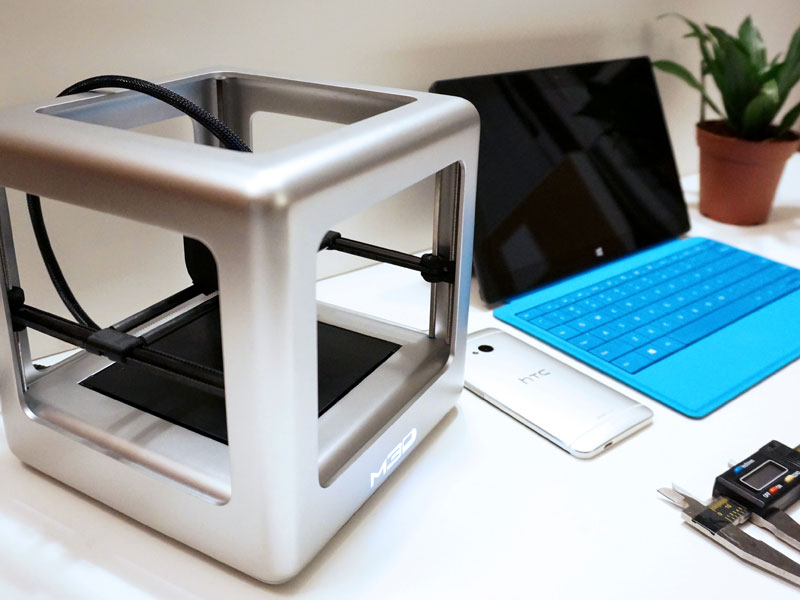 The Micro 3D printer. M3D, based in Bethesda, is one of several firms working to build Maryland's additive manufacturing industry.
Courtesy: M3D

Close to $3.5 million has been pledged on Kickstarter to the Micro, a tabletop machine advertised as the world’s first consumer-friendly 3D printer. Barely a week after the early-April launch of its crowdfunding campaign, M3D, the two-man outfit responsible for designing the printer and its corresponding software, broke $2 million in pledges. News spread across the tech blogosphere. An easy-to-use 3D printer that costs barely $100 more than the latest Google Chromebook? Get yours today!

The news coverage glossed over the company’s location—Bethesda, Md.—an otherwise unremarkable detail were it not for what’s currently brewing in the Land of Pleasant Living. Companies, community leaders, and state officials have made impressive bets on additive manufacturing in an attempt to style Maryland as the 3D-printing hotbed of the U.S. and grow the state’s manufacturing sector in the process.

“We have a very real opportunity to build Maryland into a hub for 3D printing and additive manufacturing, increasing Maryland’s competitiveness, bottom line, and driving economic growth,” says Jan Baum, executive director of 3D Maryland, a new program that’s pushing awareness of and education about 3D-printing technologies as the new means for companies large and small to create inexpensive prototypes.

3D printing or additive manufacturing, so called because computerized machines successively layer material to create three-dimensional objects, has grown in popularity over the last decade as technology has advanced and costs have come down. The technique allows for rapid prototyping as well as the creation of objects that traditional injection molds cannot, and is driving a nascent but fast-growing market that the market research firm Gartner estimates to be worth $669 million in 2014.

In Maryland, a 2,000-square-foot “Innovation and Printing Lab,” established with the help of government funding, opened this spring at the Maryland Center for Entrepreneurship and will serve as 3D Maryland’s headquarters. Four 3D printers—some suited for the desktop, others industrial-grade—are installed in the lab. Baum, an industry veteran, is taking a two-year hiatus from her gig directing a 3D-printing lab at Towson University to spearhead the project.

Maryland’s push behind additive manufacturing isn’t limited to the 3D Maryland initiative, which will begin in Howard County, to the southwest of Baltimore, and eventually expand to the rest of the state. Signed into law this year was a bill establishing a Northeastern Maryland Additive Manufacturing Innovation Authority, a partnership with the Aberdeen Proving Grounds and state legislators in Cecil and Harford counties, northeast of Baltimore. And a host of companies, from Aberdeen in the north to the suburbs of Washington, D.C., routinely turn to digital fabrication for their rapid prototyping needs. Columbia-based Bowles Fluidics, makers of automotive part such as nozzles and washer pumps, uses a EnvisionTEC 3D printer. Most of the unmanned aerial drones built by Jessup-based UAV Solutions include a 3D-printed part. Danko Arlington, a Baltimore-based firm that serves the military and aerospace industries, owns two of the largest 3D printers on the market today. A professional users group that includes Under Armour (UA), Stanley Black and Decker (SWK), and the Johns Hopkins University Applied Physics Lab serves as an exchange, Baum says, for swapping ideas and new manufacturing processes.

Ultimately, the goal is to attract the companies creating additive manufacturing jobs and compel them to move to the state. It’s already happening, Baum says: a New York-based manufacturer that uses nine 3D printers in its production process phoned her in April about relocating to Maryland “because of our commitment to these technologies.” M3D’s co-founders, David Jones and Michael Armani, also have jobs on the brain. Thanks to the strong Kickstarter support, the pair hope to have all M3D’s operations based in Montgomery County, northwest of Washington, D.C., by the time they start shipping the first run of $299 Micro 3D printers in early 2015.

“In Maryland we have done a very good job of creating an ecosystem around life sciences, around cyber[security], but this area around manufacturing—that’s a real opportunity for the Maryland economy,” says Howard County executive Ken Ulman, who’s now running for Maryland lieutenant governor in 2014 on current lieutenant governor Anthony Brown’s ticket. It was Ulman who, along with Howard County Council approval, allotted $530,000 for 3D Maryland—the lab space, equipment, and salaries for Baum and a lab technician—as a two-year pilot project. He calls the state’s manufacturing economy “sophisticated” and “high-tech,” noting that additive manufacturing is Maryland’s “sweet spot.”

A 2014 report from the Economic Alliance of Greater Baltimore, an economic development group representing Baltimore city and the surrounding counties, makes the same claims. “No region is better positioned for improving, refining, and creating new methods and uses for 3D printing,” the report’s authors write, adding that digital fabrication technologies are the “future of manufacturing” in Maryland.

That could very well be, especially if 3D printing—a technology with roots dating back to the 1980s—can continue to distance itself from its recent do-it-yourself, “maker” reputation (see: MakerBot, Micro) and position itself in the minds of legislators and others as a key tool to revive American manufacturing (see: Stratasys Fortus). Some of the largest U.S. manufacturers have already taken note: General Electric (GE) has promised $3.5 billion to triple the size of its 70-person 3D-printing staff over the next five years.

And when four industry representatives were invited by the House Committee on Small Business in March to testify on Capitol Hill about the economic benefits of 3D printing, Baum told them that additive manufacturing “will alter how we compete in an increasingly global marketplace” by giving startups and other small businesses a more financially efficient means to test out new technologies before scaling them up.

“We don’t think any other state is doing what Maryland is doing [with 3D printing],” Baum says. “We know that innovation and entrepreneurship are the backbone of the economy increasingly going forward.”