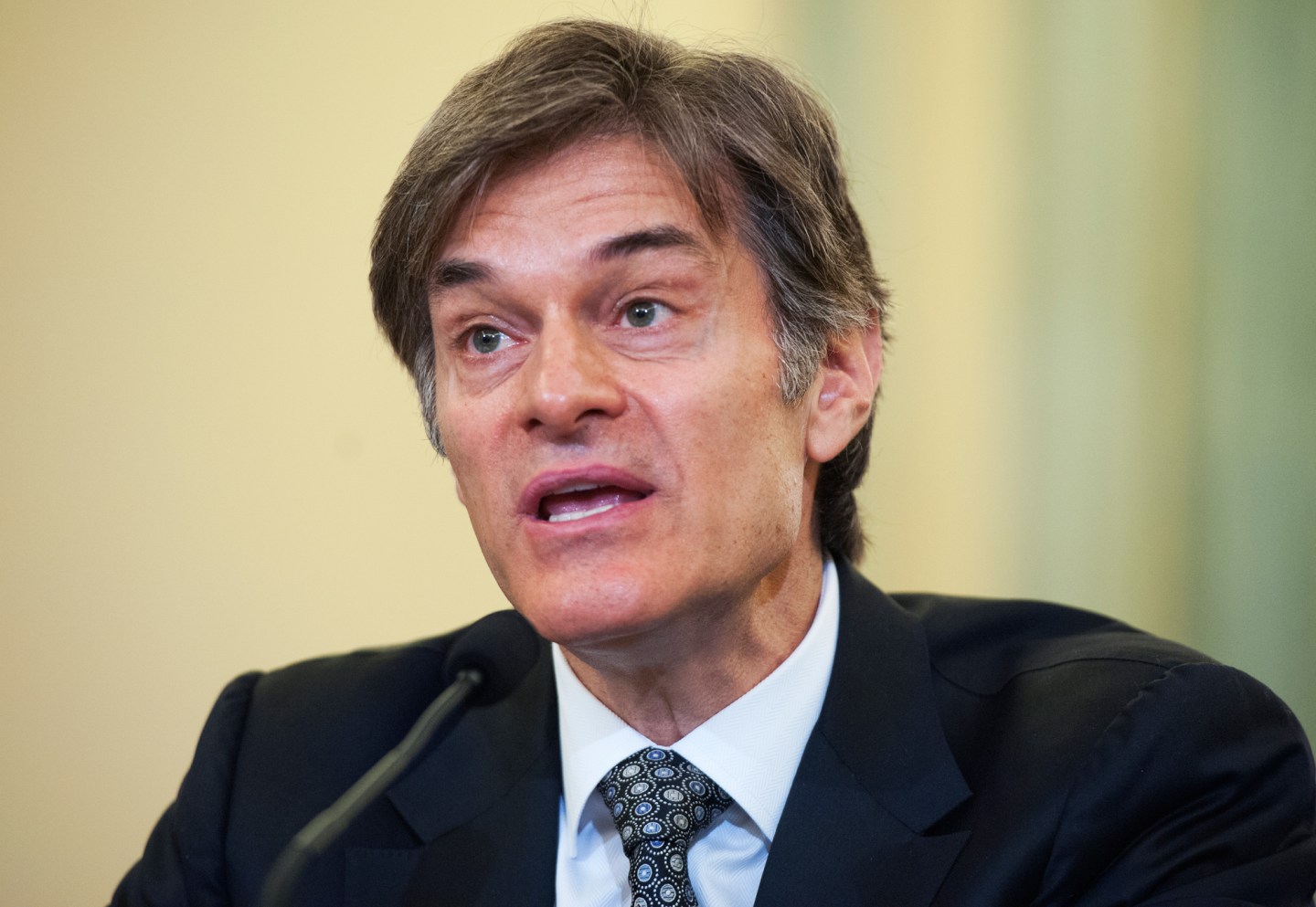 During a hearing on Capitol Hill on Tuesday, senators took him to task for promoting weight loss products on “The Dr. Oz Show” made from green coffee beans that the Federal Trade Commission has described as “phony.”

The surgeon-turned-celebrity testified before a panel looking at misleading advertising for weight loss products. The grilling was part of a larger crackdown on the $2.4 billion weight loss industry.

In fact, the Federal Trade Commission sued Pure Green Coffee in May for false advertising and for creating fake websites based on green coffee, which costs $50 for a one-month supply. The company also ran online ads that “contained phony weight loss claims,” the agency said. Science has largely disproven benefits from consuming the bean extract.

Sen. Claire McCaskill, D-Mo., the chairwoman of the subcommittee on Consumer Protection, Product Safety, and Insurance, gave Oz an earful for calling the coffee beans “miracles” on his show.

“I don’t get why you need to say this stuff when you know it’s not true,” she said. “When you have this amazing megaphone, and this amazing ability to community, why would you cheapen your show by saying things like that?”

In his defense, Oz, a graduate of Harvard University and University of Pennsylvania’s Wharton Business School, claimed that he believes in the products’ ability to help consumers. He wants to be a “cheerleader” for the audience and give them “hope,” even if it’s through alternative medicine.

Oz also said that his language on the show has “provided fodder for unscrupulous advertisers” to use his likeness on websites, such as in the photo above. As a result, he said, “I’m second-guessing every word I use on the show right now.”

In a statement, Oz said he’d take a tougher stance against such phony medicine. “In addition to exercising an abundance of caution in discussing promising research and products in the future, I look forward to working with all those present today in finding a way to deal with the problems of weight loss scams,” he said.

Whether his own business, including his recently released magazine, Dr. Oz The Good Life, is affected because of the poor press remains to be seen. But controversy can sometimes be a good sales point, according to a 2012 study by professor Jonah Berger of Oz’s MBA alma mater. “It’s a time-honored adage: There’s no such thing as bad publicity,” he wrote.

Berger said that his research shows that “even terrible publicity can bolster the bottom line.” The study analyzed the sales patterns of hardcover books reviewed by New York Times, classifying the reviews as positive or negative, and looking at sales figures four weeks before and after the review. While good reviews heavily increased sales (as much as 50%), negative reviews helped, too, especially for new authors. “Even the harshest review can be a boon,” he said. And, so too, may an angry senator for the Oz media empire, which notably includes six New York Times best-sellers.

The negative attention may be a plus, if Berger’s study is any indication. In the meantime, head over to his website, www.doctoroz.com, and check out the Green Coffee Bean Weight Tracker. At least before it gets taken down.