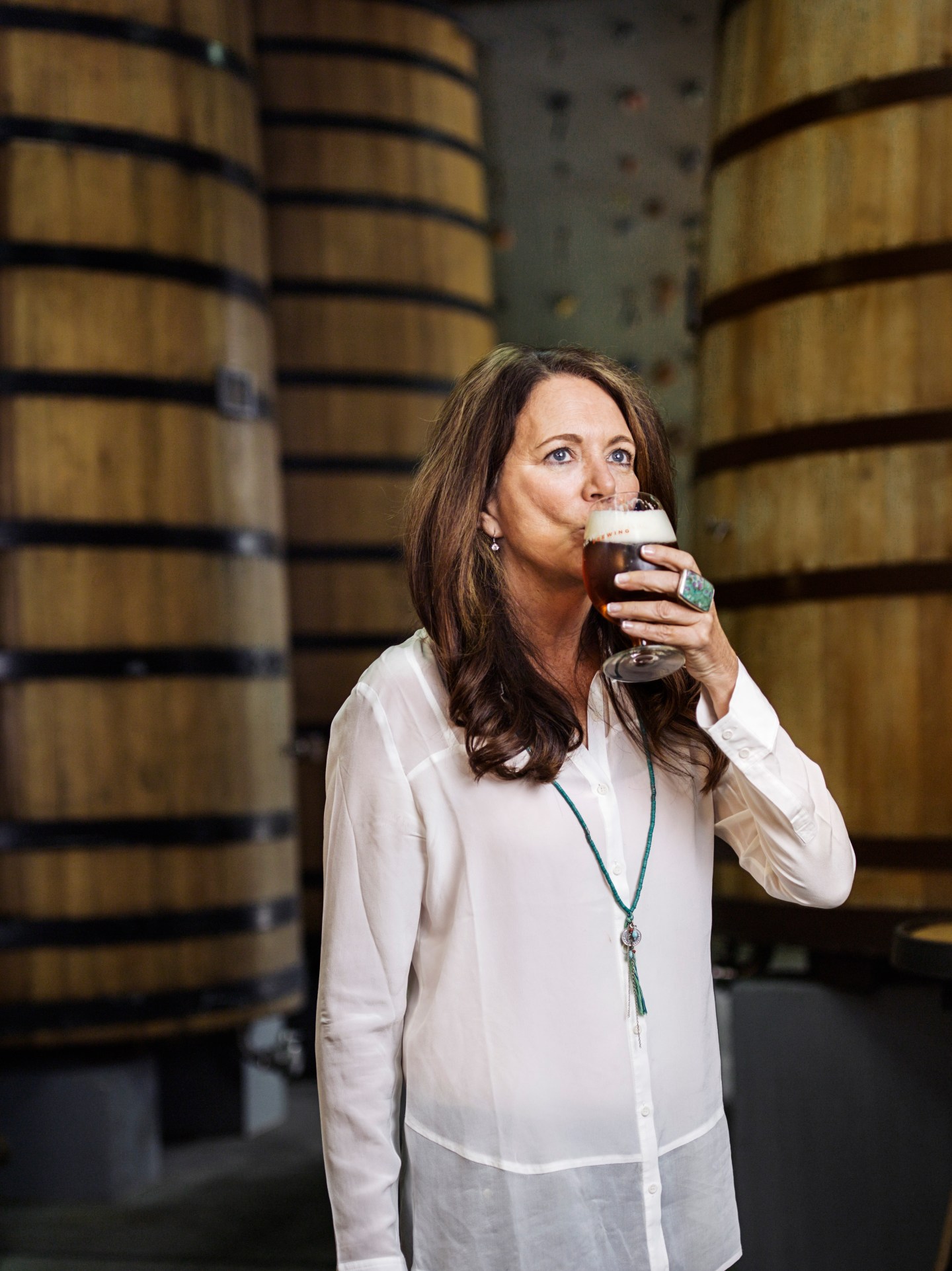 What do you get when you pair an electrical engineer with a Quaker-educated social worker? Answer: the country’s third-largest craft brewer (behind the makers of Sam Adams (SAM) and Sierra Nevada) and the creator of such beers as Fat Tire and Ranger IPA. Kim Jordan (the former social worker) teamed with her then-husband, Jeff Lebesch, to found New Belgium Brewing, and she took charge of marketing. Now 56, she became CEO in 2001 when he left the business (the couple later split). Today New Belgium produces 10 beers, along with a host of seasonal releases. The company generated $190 million in revenues in 2013. Passionate about the environment, she has embraced renewable energy: For example, the brewery, in Fort Collins, Colo., has installed the state’s largest private solar array, powering the bottle line for up to eight hours on a sunny day. Jordan’s story:

I grew up in a fairly liberal family. Dad was in political administration in Sacramento, and my mom was a social worker. Then we moved to Washington, D.C., and I went to a Quaker high school, where I learned about George Fox, one of the founders of American Quakerism, who said, “Let your life speak.” That greatly informed who I am today.

I graduated from high school at 16 and had friends in Colorado, so I moved west in 1976. Since my mother was a social worker, I thought that was an interesting field. So I went to Colorado State University on and off in social work in the mid- to late ’80s. After that, I became a social worker for low-income single parents in Project Self-Sufficiency, a program supported by various government agencies, for three years.

I was in my thirties when I met Jeff Lebesch at a party in Fort Collins. We started dating and got married in the fall of 1990. Jeff is a bright electrical engineer and has a shy way of being. It was clear to him that if we started a business, I could run the front side that dealt with customers.

Jordan bottles beer in the basement of her home in 1991. Photograph courtesy of New Belgium

New Belgium was Jeff’s dream. He was a home brewer, and beer was my drink of choice. He’d been entering his beers in competitions, and took some courses at UC Davis. In the mid-’80s, he was working for a firm doing bench-testing of electric motors in Europe and went on a mountain bike trip in Belgium on vacation, where he tasted all kinds of beer.

When he came home, he wanted to emulate some of those. He created one that became Fat Tire, among our most popular brews. Back then there were German lagers and English ale, but there was no one in the United States specializing in Belgian beers.

We started New Belgium in 1991, and I continued part-time at Project Self-Sufficiency until October 1992. For a short period, Jeff continued working for the firm he was with. I’d work as a social worker during the day, then after putting my two sons to bed, I’d go to Kinko’s to make marketing materials. On my days off, my son Zach would do his homework in the van while I would pick up orders and deliver the beer.

I agreed to start the company because I’d hate to think we were too afraid to try. It’s important to say yes to things, if you can. I figured we could always go back to day jobs. I was enthusiastic about it and involved from the beginning.

Our original brewery was in the basement of our house. We took out a second mortgage, ran up our credit cards, and started the business. The initial capitalization was about $60,000. Jeff could build pumps and make a lot of the systems we used to build the first brewery. That first year our annual revenue was about $150,000.

We were in the house 14 months before it felt like we had more stacks of beer than furniture, so we had to move the brewery to a second location. We sold the first brewhouse equipment by telling the buyers if they paid cash upfront, we’d give them a 10% discount. We needed the cash. We said we’d also allow them to come brew with us in the basement, training them, until we moved.

We then got a brewery equipment vendor to help us get financing from a leasing company and an SBA loan to open the second brewery.

In October 1992 we served beer at the Great American Beer Festival on Thursday, Friday, and Saturday nights. I had my son Nick the following Wednesday, and on the next Monday we moved into our second location and started employing people in earnest.

It wasn’t that difficult selling the beer. In Fort Collins, people were just beginning to understand craft beers. You could go to a brewpub and drink it there with a meal. We specialized in package beer [i.e., sold in bottles or cans rather than on tap], so we had an enthusiastic market, and Fat Tire was a great name for a beer. My next-door neighbor was an artist, and we designed the label together.

We would tell our story barstool by barstool. I’m a bit shy and found that somewhat challenging, but I became better at it over the years. On the weekends we’d go to festivals to serve the beer, talk at chamber of commerce functions, and do fundraising events.

By 1994 we were jam-packed, so we started the process for building a new brewery. A block and a half down the street was a 48-acre parcel of land that we bought in a few different chunks over time. We enlisted the help of a design-build firm and moved into our current brewery in December 1995.

Brewing is a capital-intensive business with a step function. You have a brewhouse, fermentation capacity, and a packaging line. You build one, it works to capacity, then you need something bigger. Our original keg line cost $2 million, so each time you invest a significant chunk of money, the return on assets is not that great for a while.

There are always years of investing, which are leaner, and the years where you’re utilizing your assets in an efficient way and are amassing cash. Our expansion was done with traditional bank financing, so we’ve never had an equity partner. We’re now in the beginning stages for building an additional brewery, in Asheville, N.C., a $140 million project.

When we first started New Belgium, I thought, as the Quakers say, we could let our business life speak for us as well. So we make sure that our practices of environmental stewardship, pioneer thinking on management, and broadly sharing equity do this.

As a family business, we needed to partner with our co-workers so we could have some time to be a family. In 1996 I decided to open up the books to our employees and did a lot of work around financial literacy so that they could be more involved in making decisions.

Jeff and I gave 10% of our ownership to our co-workers through a deferred compensation plan, which began in 1996. In 2000 we merged that plan with an ESOP [employee stock ownership plan], and at that point our co-workers owned 32% of the company.

In 1996, Jeff realized he didn’t have the technical capability to move the brewery forward. So we hired a brewmaster named Peter Bouckaert, who’s Belgian, and when Jeff decided to leave, we had the right people in place.

Jeff stopped working at New Belgium in 2001, and we divorced in 2009. I stayed with the company because it’s meaningful work that I want to refine. I really love the process of co-creating with people–not just making beer, but being an advocate for progressive business thinking. Jeff’s been retired for 13 years but keeps busy.

When we divorced, the company bought Jeff’s shares back and retired them. I don’t own any of the company today because at the end of 2012, all of the shareholders–my two sons, five management shareholders, and I–sold our ownership to our co-workers through the ESOP.

Selling the balance of the company to our co-workers enables us to have a self-perpetuating plan. Now we operate as an ESOP with a B corporation designation [intended to promote transparency and benefit the public]. We disburse a number of shares to all of our owner co-workers every year, and they’re prorated, based on a worker’s percentage of the total wage pool.

Craft brewers are a very collegial group, and, generally speaking, I don’t feel being a woman owner blocks me in the industry. But women need to assert themselves to be taken seriously in business. There are feminine traits that are really useful in business, as well as masculine traits. Those who do really well in business tend to have both in the toolbox.

Codify what you stand for as a company and talk about that a lot with your co-workers. Every August we have a companywide retreat outdoors with 550 employees, where everyone talks about what we need to do in the next year to meet our core values. That kicks off our strategic planning for the year.

Give people the opportunity to try again. Rather than go around asking who made a mistake, we ask, “How did the system fail, and what can we do to be less prone to fail again?”

Stay on the forefront. When we invest in new technology, we expect some of that to fail. If you expect things to always succeed, you’re probably not far enough out on the learning edge.