The community builders of the New Metropolis 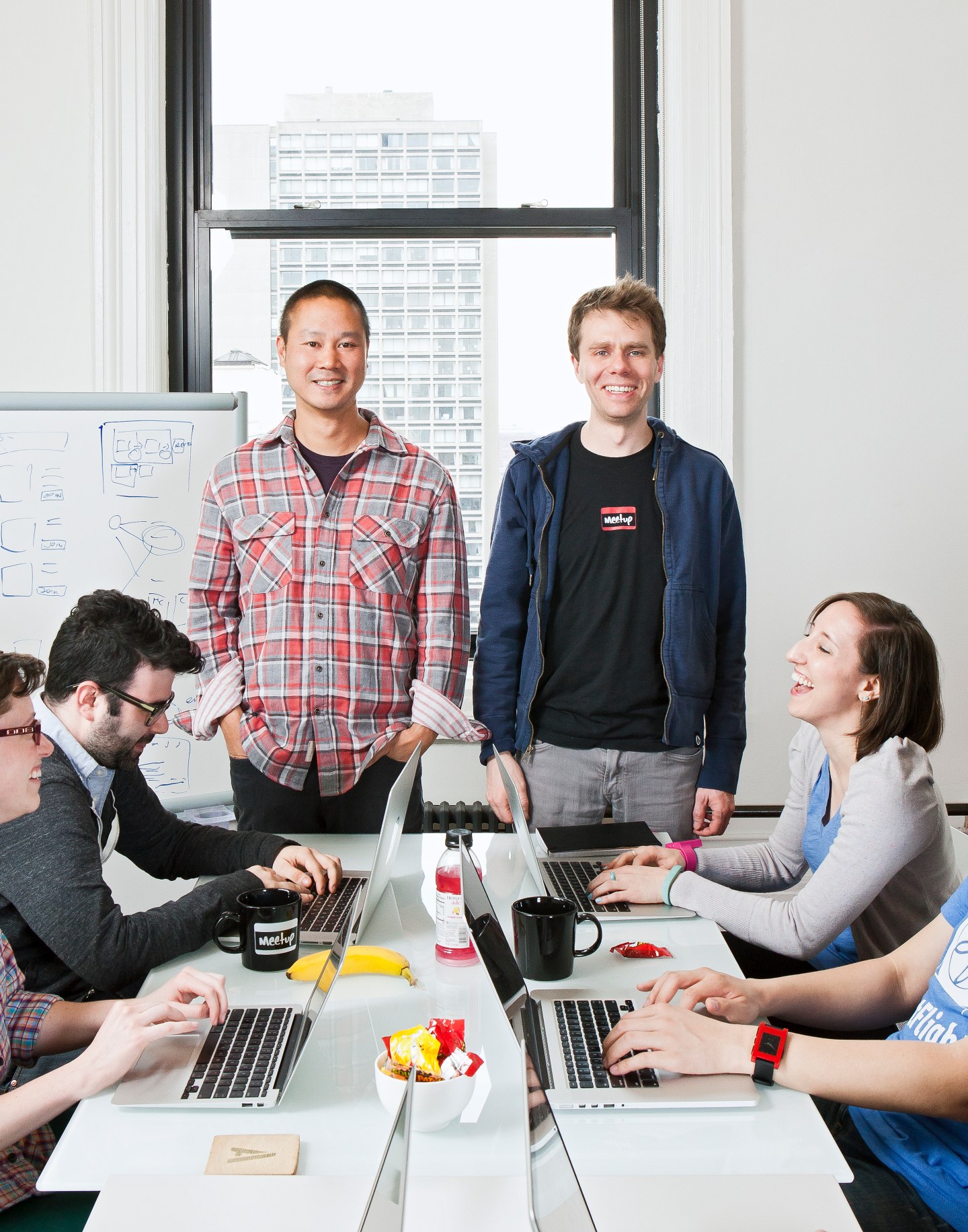 Tony Hsieh and Scott Heiferman were talking about cities and community long before it became hip to do so. As CEO of Zappos, Hsieh built a culture that encouraged people to “collide” with each other, and after deciding it would be easier for them to do that in an urban location than in a suburban office park, he redeveloped downtown Las Vegas and moved Zappos’ headquarters there last year. As co-founder and CEO of Meetup, Heiferman built a platform that uses the power of the Internet to let people with common interests organize and meet face-to-face, to the tune of some 16 million members and 140,000 different Meetup groups. The two have known each other for years, but ever since Hsieh became an investor in Meetup, they have been collaborating and colliding a little bit more closely. Fortune’s Leigh Gallagher sat down with them to talk about cities, community, and how tech can enable both.

Tony, why the focus on city-making?

Hsieh: I didn’t really know or care about anything related to urban planning. But 10, 15 years ago, I used to throw a lot of parties. And I’d notice that there were multiple bars, and the first bar would reach this congestion point, and then another bar would open to promote the circulation and more collisions and so on. And then at Zappos, we designed the office [the former Las Vegas City Hall] so that employees collide with each other more often. For example, even at our new office right now, there’s a parking garage connected to the skybridge, connected to the office building. And when the city employees used to work there, they would park and walk across the skybridge to the office. And we actually made the decision to shut down the skybridge, which forces employees out on the street and creates more collision opportunities with the community and each other. And now on the city level, it’s the exact same concept, just on a different scale. So to me, it’s like trying to throw one big continuous party.

And what’s your take on why more people are choosing to live in cities?

Hsieh: I looked a lot at the science of happiness research for my book [Delivering Happiness], and [one big theme is that] people are very bad at predicting what will make them happy. I think for the longest time when people were moving out to the suburbs, they bought a bigger house thinking they would be happier, and what they unwittingly ended up trading was hours. It’s two hours of commute time, maybe more, for that bigger house, and that’s time they could have been building social connections with friends or being relaxed. And the research has shown that one of the biggest predictors of happiness is basically peoples’ commute time [relative to] their personal time. The science of happiness research also shows that happiness comes from connectedness, meaning the number and depth of your relationships, and I think those things are generally what we can sort of find in a city much more than isolated in the suburbs, where you may not even know your neighbors.

But one thing you need in a great city, something that is the cheapest thing to do, but also the hardest, is to have a culture of openness and collaboration and sharing. If people are twice as likely to engage with each other, then maybe you don’t need residential density; and if you live in a city or place where no one talks to each other, then the density doesn’t matter. So really, the question is, What’s the culture of the community or the city? And that’s something that we’ve been very mindful of in terms of the types of communities that we invest in. In downtown Vegas, whether it’s small businesses or tech companies or fashion companies, we want the entrepreneurs to have a bias to help other people in businesses in the community.

How important is it to encourage diversity?

Hsieh: We’re in a slightly different situation in that most of the properties we’ve acquired are empty lots, so it’s not quite the same challenge that other cities have. But ultimately you want people of diverse socioeconomic statuses. And you want to ensure that not only can everyone live there, but that they’ll ultimately somehow interact with each other.

Heiferman:I think the answer is thrusting people together. You need these catalysts for the collisions. And as we go deeper into a world where our earbuds are in and the phone is in front of our face, you can live in a bubble where you’re only exposed to your world of friends, or as Eli Pariser calls it, a filter bubble. And the ability to become exposed to people who are not your friends and who are different from you gets harder and harder. But I actually think that there’s a counter-trend on the Internet in the way that the Airbnbs and Ubers and Lifts and Meetups and others are sparking these collisions. It may be over-simplistic, but I think ultimately when people talk to each other, they get on better. I also think that there’s going to be a reclaiming of space in new ways. Starbucks talks about being the third place, but I guarantee if you go to Starbucks, everyone’s just going to be staring at their screen. They’re not going to be talking to each other.

Tony, what has most surprised you most now that you’re a few years into developing downtown Las Vegas?

Hsieh: What’s been surprising is the stuff that actually gets people excited about our community is not that expensive. It’s basically just finding someone that’s passionate about something. It’s exactly what makes Meetup work. Someone is passionate about something, and then they find a few people who want to support it, and then it grows organically over time, and it becomes this big thing, whether it’s trivia night or people who are into 3-D printing or whatever weird or interesting thing is out there.

And what has been your biggest lesson during that time?

Hsieh: I think the biggest lesson for us is being more careful with the word “community” in an urban redevelopment or neighborhood context. When you’re referring to a physical space, for the people there it can imply different things. For example, if we wanted to open up a skating park but there was someone there already that was passionate about skating parks, suddenly that’s being anti-community because you’re not allowing the person that had the idea 10 years ago to [do it,] even though that may not be the best executor of it. Or people misinterpret you as taking on the role of government. [And then it becomes,] Why aren’t you also addressing every issue under the sun? Why aren’t you providing free education and solving this problem and doing X, Y, and Z?

Scott, what does community mean to you?

Heiferman: Well, the definition of community for me is people talking. And if they keep talking for a while, they stay a community. If they don’t, then it’s not a community. You can’t call a piece of land a community. A community is a living thing. It’s made of people, and it’s living, and it’s breathing, and it dies.

And what if anything does Meetup take from principles of urbanism?

Heiferman: It’s funny–in urbanism you talk about density and physical metrics, like collisions per square foot or mile. In growing Meetup, we think about the density of how many people interested in Double Dutch do you have to have per square mile for there to be a Meetup? And ultimately what does that mean for what makes a great city?

And what does it mean?

Heiferman: Ok, so certainly you’ve got the New York Sports Tech Meetup and the New York City Mobile Experience Meetup and the Health Developers and the Python Programming Ladies and the Big Data Meetup. Now it gets really interesting when you keep going and get to the ones with 300 members. You get the SEO Meetup and Wearable Computing Meetup and the Innovation in Education Meetup and the 3-D Printing Meetup, and the Huff Post Code Meetup. This is how you develop an economy. This is what made the New York tech industry take off. There is the ability for collisions, for people to collaborate, there is all the funding that has happened in these Meetups, all the hiring that has happened in these Meetups, all the founders that found their co-founders at the Meetups. These are the stories we swim in. And it’s so technocratic to think [affects stern, officious tone], “It’s about the capital and the education and the this and the that.” No, actually, you know what? A fucking city is fucking people meeting up.

Totally. And actually that’s exactly how old school Silicon Valley worked. Steve Wozniak is on record saying if it weren’t for the Homebrew Computer Club, then Apple wouldn’t have existed.

A shorter version of this interview originally appeared in the June 30, 2014 issue of  Fortune.