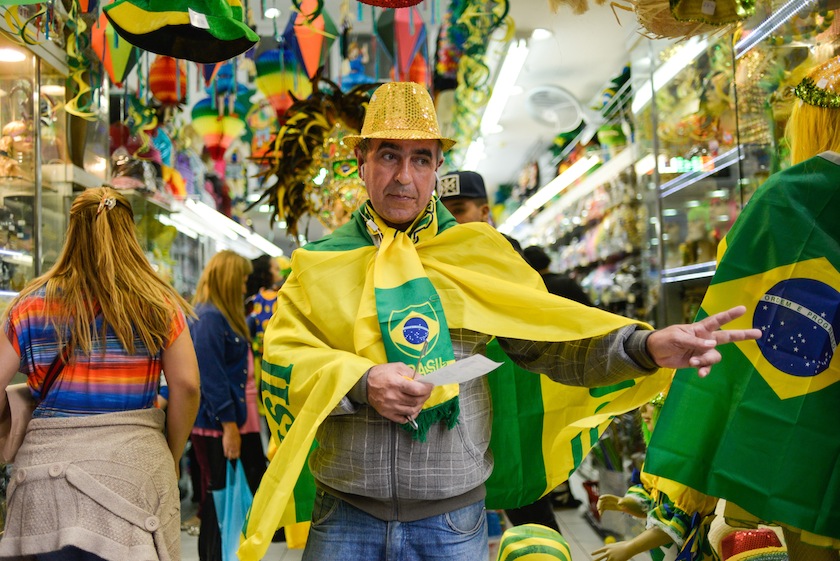 SAO PAULO, BRAZIL - JUNE 10: Stores in the downtown of the Sao Paulo attracts customers and tourists' attention ahead of the 2014 FIFA Football World Cup on June 10,2014. The 20th World Cup will run from June 12 to July 13 with the participation of 32 teams from five continents. (Photo by Carlos Becerra/Anadolu Agency/Getty Images)
Photograph by Carlos Beccrra — Anadolu Agency/Getty Images

Before Brazil’s preparations for the World Cup began, the safety doors at São Paulo’s Sacomã metro station asked passengers waiting on the platform to allow for the “alightment” of those in the train before entering.

For those who could read the Portuguese version of the sign, it was easy to see that something had been lost in translation. Clearly the metro system in the largest city in South America wanted people on the platform to let passengers exit a train before pushing their way in.

Just a couple years ago, those confusing yellow signs on the glass safety doors were covered by new, corrected ones. And now that the World Cup is just days away from kicking off in the city with a population that surpasses 11 million, new signs written in six languages have appeared in several stations letting visitors know that they can ask metro workers for help.

Whether they’ll get an answer is the question.

Brazil’s public schools have long been criticized for failing to provide students with an adequate education in the basics, including the nation’s language, Portuguese. According to the country’s 2010 census, 49.3% of the population over the age of 25 has not even completed elementary school. And private primary and secondary schools leave much to be desired when it comes to second-language learning. While English is offered, many Brazilians say the only thing they learned in class was the verb “to be” and “the book is on the table.”

Those who can afford to attend one of the dozens of private language school chains that have set up shop across the country are able to gain a better grasp of English. But the lack of standardized learning has left Brazil behind not only in international business, but also in dealing with tourists.

With an estimated 600,000 soccer fans expected to visit the country while it hosts the World Cup and just two more years before even more global spectators descend on Rio de Janeiro for the 2016 Olympics, Brazil’s government decided to try to bring the service industry up to speed when it comes to dealing with customers who speak English or Spanish.

In June 2012, the Ministry of Tourism teamed up with the Ministry of Education to launch a program called Pronatec Turismo. Through the training program, 166,000 professionals working in the tourism industry have signed up to take 160 hours of English or Spanish classes for free in one of 120 cities that will either host games or are deemed tourist destinations. Each of the 54 courses offered was designed to help employees working in specific sectors, such as tourism, hospitality, management and business, educational and social development, environment and health, information and communication, food production, cultural and design production, and security.

While it might seem a bit late for the BRIC nation to start considering its need to communicate with the English-speaking world, Pronatec, as well as other private programs targeting those who will have to deal with World Cup tourists, seem to be working. A desire to learn English for reasons not related to any mega events has been growing since Brazil has entered the global economic spotlight.

According to the 2013 Education First English Proficiency Index (EF EPI), Brazil ranks at No. 38 out of 60 for its overall English proficiency, which is considered “low.” While those numbers might seem discouraging, they’re actually an improvement. The 2012 EF EPI put Brazil at 46 out of 54 countries, with a level of English proficiency seen as “very low.”

And the Brazilian government hopes its classes will continue to increase the population’s proficiency in English and improve its international profile.

“Pronatec Turismo will continue after the World Cup and the Olympics,” says Lima, “with the aim of improving those already in the industry and helping new people qualify to be involved in the tourism labor market.”

Some may be doubtful of the government’s intentions and promises, as many have already made clear, with a year of protests against government corruption and a lack of investment in education and health care. But others have a more positive outlook.

“One good thing that has come from the world watching Brazil is everyone’s desire to learn English and do better,” says Ana Paula Oliveira da Silva, an IT professional at a multinational company located in São Paulo. “I don’t know why the government didn’t offer this kind of program before. Paying for classes is so expensive that many people can’t even consider it, so this is a good way to get people interested and started in something that could help change their lives.”