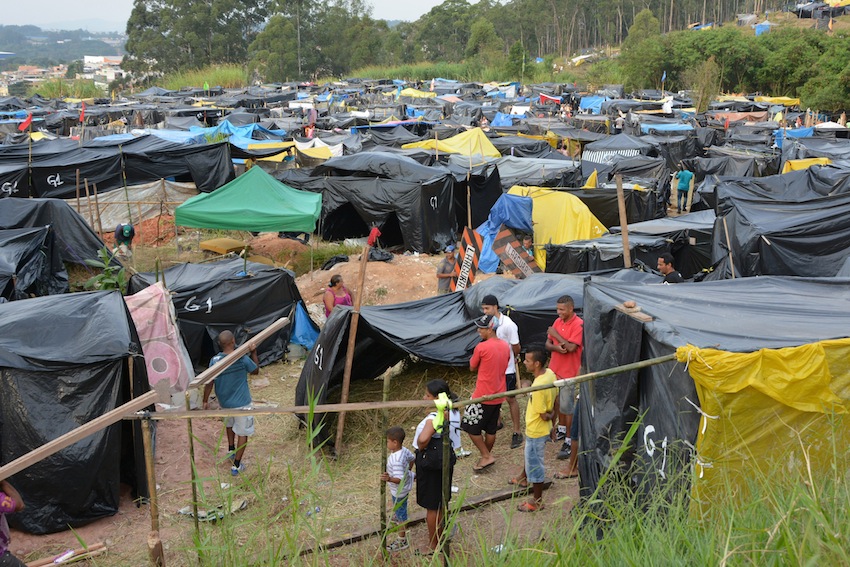 SAO PAULO, BRAZIL – MAY 06: Around 2,500 families associated with Brazil's Homeless Workers' Movement live in a makeshift campsite close to São Paulo's World Cup stadium, Arena Corinthians, in the eastern São Paulo district of Itaquera, Brazil on May 06, 2014. A smaller group of young families, some with babies and small children, commandeered the private land on Saturday, and numbers have continued to grow. Many of the families are from the local area and have been forced out of their homes by rising rent prices, linked to improvements made for the World Cup, movement representative Natalia Szermeta said. The site is just four kilometers (2.5 miles) from the city's new World Cup stadium, the Arena Sao Paulo. (Photo by Ben Tavener/Anadolu Agency/Getty Images)
Anadolu Agency Getty Images

When Zezito Alves and hundreds of families from São Paulo, Brazil’s Homeless Workers Movement occupied a vacant lot in the city’s east end neighborhood of Itaquera on the night of May 2, they wanted just one thing.

“All we want is proper housing,” Zezito says, two weeks later, as he walks through the narrow footpaths that run between the rows of makeshift tents made of garbage-bag plastic and two-by-fours.

The group of several hundred families has since grown to an estimated 5,000, with each family’s tent reserving a space representative of the land where they hope to build their permanent homes. For now, they sleep directly on the ground—some are lucky enough to have an old mattress to lie on—and share a water source close to the road so they can shower and wash clothes and dishes. The community has even been divided into neighborhood-like clusters, with each tent marked with a letter representing its group and numbers identifying individual homes.

Zezito is one of the coordinators of the Homeless Workers Movement (MTST), which bring together people who struggle to pay rent to address affordable housing issues with government officials and others in power. In São Paulo’s Itaquera neighborhood, which will host the opening game of the World Cup on June 12 just four kilometers from the occupation, rent has gone through the roof, with the cost of each square meter increasing 165% in the last six years, according to the FipeZap Index. Zezito and others in the movement say the World Cup and the building of the new Arena Corinthians, also known as Itaquerão, have aggravated the situation, making it impossible for anyone earning the current monthly minimum wage of 724 Brazilian reais (approximately $326) to pay rent and feed their families.

“My husband only makes 600 reais a month working at a store,” says Evilane, a woman in her twenties living in one of the occupation’s tents. “Our rent went up to more than 400 reais. We’ve always lived in this neighborhood, and now we can’t afford to pay rent and bills. How are we going to eat?”

Evilane’s husband is one of many São Paolo residents who work for less than minimum wage and are paid under the table. He took a job he could get, she says, while she takes care of their home. Now she watches over their tent during the day and looks after a 6-year-old boy named Lucas who came to live at the occupation with his grandmother. Lucas is not related to Evilane or her husband in any way, she says, but one day started calling them mom and dad. She says she isn’t sure if Lucas will continue living with them once they have a more permanent home. In fact, she says she isn’t sure of anything the future holds.

“Right now, all we want is to be able to have our home,” she says. “Hopefully, it will be here.”

One thing that is certain: The owner of the land where Evilane, Zezito, and thousands of others are currently camped out is not going to give up without a fight. Representatives of the MTST and Viver, a construction company that specializes in luxury apartment buildings, attended a court-ordered meeting on May 23 with the intention of finding a solution to the situation that would avoid having police forcefully removing those living on the occupied land. The meeting ended without resolution, leaving the court to schedule one more session on June 16, four days after the World Cup kicks off. The families will not have to leave their tents until a legal decision is made.

The occupation in Itaquera, referred to as the Copa do Povo (the People’s Cup), will now come face-to-face with the international sporting event its organizers claim has exacerbated its problem. But it wasn’t their intention to stay here like this for so long, says Zezito, looking out over the tents that so many of his friends now call home. Other residents standing around him nod in agreement and begin to discuss the difficulties of not having a proper place to live.

When asked how Lucas gets to school every day, Evilane says he isn’t always able to go because his public school is located more than an hour-long bus ride away from the tent city, in the neighborhood of São Miguel Paulista.

Zezito says that MTST will continue to fight for affordable housing until they get what they deserve.

“We’ll keep fighting for what is ours,” he says. “We’ll stay here until the government does the right thing and makes it possible for us to live with dignity.”