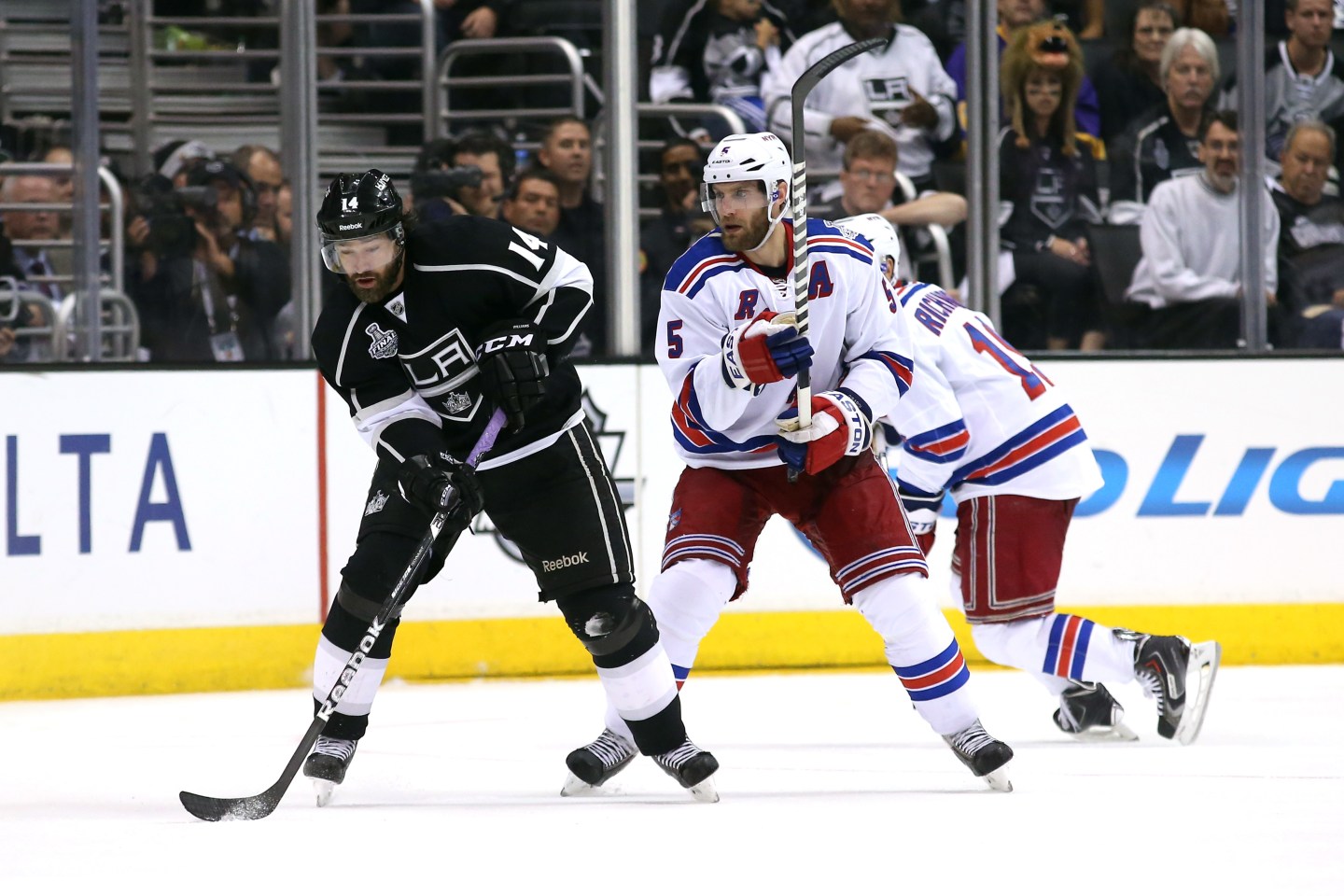 LOS ANGELES, CA - JUNE 04: Justin Williams #14 of the Los Angeles Kings with the puck against Dan Girardi #5 of the New York Rangers during Game One of the 2014 NHL Stanley Cup Final at the Staples Center on June 4, 2014 in Los Angeles, California. (Photo by Bruce Bennett/Getty Images)
Bruce Bennett / Getty Images

The company that owns the NHL’s Los Angeles Kings is denying that the team is up for sale, contradicting reports that surfaced the night the Kings defeated the New York Rangers in the first game of the Stanley Cup finals.

The New York Post on Wednesday night cited multiple anonymous sources saying billionaire Philip Anschutz’s AEG will look to unload the Kings, who previously hoisted the Stanley Cup just two years ago, after this year’s championship round is finished. The Post added that AEG has been considering a sale of the team for at least five years and that Morgan Stanley is apparently lining up potential buyers.

Responding to the Post’s article in a conversation with Fortune, AEG president and CEO Dan Beckerman called the report “appalling.”

“It’s a complete fabrication from some unnamed sources trying to create chaos and mischief,” Beckerman says. He adds: “There are no plans to sell [the Kings] now, or at anytime.”

With regard to the timing of the Post’s report coming out as the Kings kicked off their series with the Rangers, Beckerman said: “It’s probably someone who is trying to create a distraction or a diversion at this opportunistic time. But, it doesn’t change the fact that it’s completely fiction … You have to sort of consider the source, where this came from.”

The rumors come at a time when Los Angeles sports franchises have been fetching billions of dollars on the open market. Former Microsoft CEO Steve Ballmer agreed to pay $2 billion for the NBA’s Clippers last week, two years after the Los Angeles Dodgers were sold to an investment group for $2.15 billion.

A Kings auction would likely attract much lower bids. Forbes recently said the team, which once struggled financially but has seen its value increase thanks to success on the ice the past few seasons, could be worth more than $550 million once the current season is over.

Anschutz bought the team in 1995 for $113 million. AEG also holds a minority stake in the Los Angeles Lakers and owns two Major League Soccer franchises and multiple sports arenas – including the Staples Center, where the Kings, Clippers, Lakers and other teams play their home games. Anschutz reportedly tried to sell AEG for around $10 billion two years ago, but did not receive a satisfactory bid.