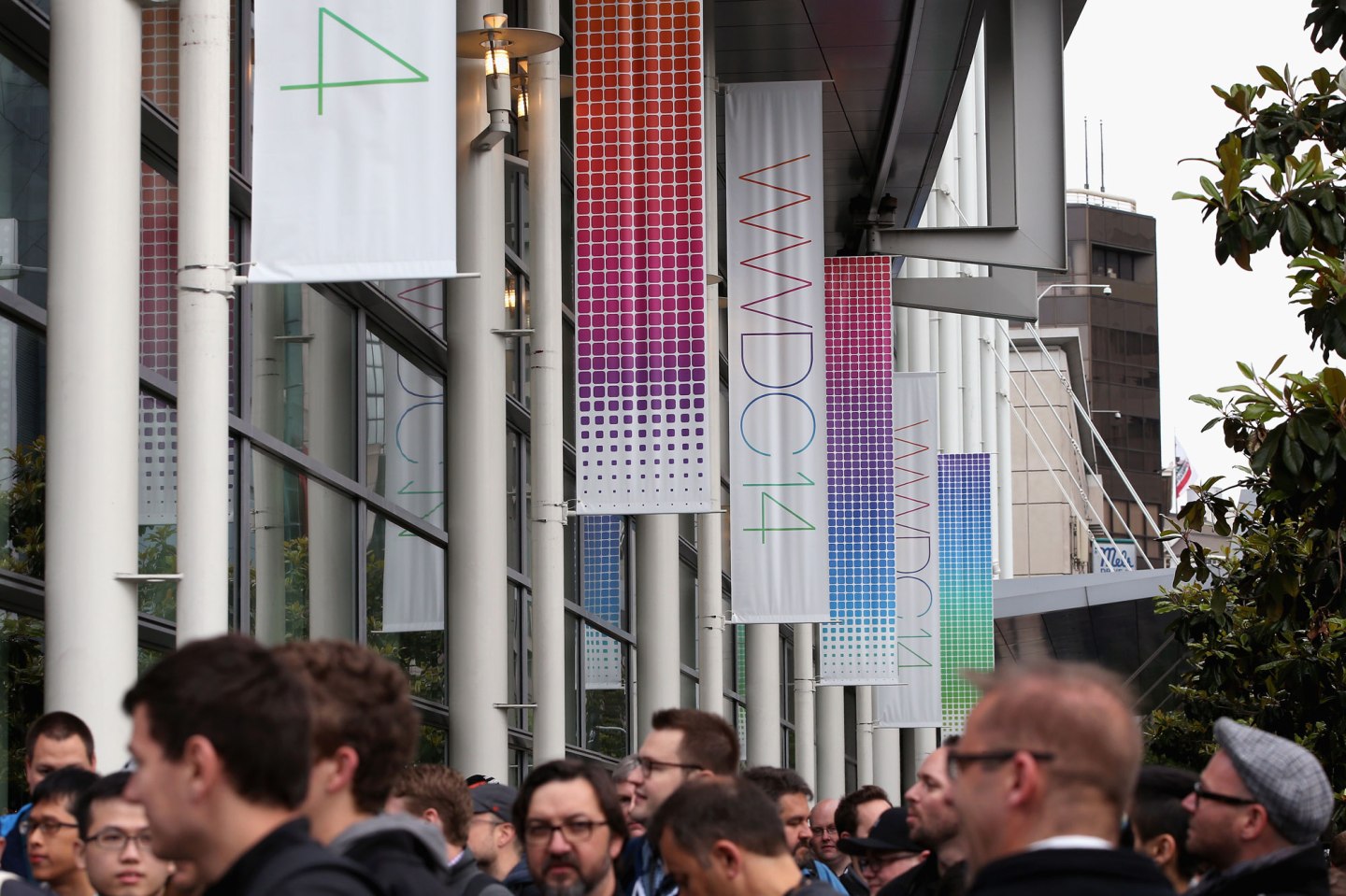 Each year Apple gathers thousands of software developers for a weeklong conference about all the latest technology that’s relevant to their lives. It’s called the Worldwide Developers Conference. San Francisco’s Moscone Center gets jammed with nerd-on-nerd sessions, with Apple engineers lecturing to and interacting with developers who write programs for Apple’s devices and software platforms.

Non-developers like me will remember the 2014 version of WWDC as the year Apple (AAPL) turned over every aspect of the developers conference to the developers. For years, the opening event of WWDC, the keynote speech by Steve Jobs and later Tim Cook, was a high-level overview of new devices and software. There’d be nary a slide that might frighten someone who majored in, say, literature or art history.

Not this year. The telltale sign that it wasn’t the usual WWDC was the moment Apple’s likeable and telegenic software chief, Craig Federighi, announced that Apple is releasing a whole new programming language called Swift. The crowd of some 6,000 software writers positively roared.

I comprehended nothing of the ensuing presentation.

Let me be perfectly clear about something: I’m not criticizing Apple for this. A developers conference ought to be for developers, as opposed to a PR event to sell products. But it’s a change that will take a little getting used to.

Unlike past years, Apple made next to no effort to spread the wealth in terms of executive talent. Tim Cook emceed, as usual, but Federighi, the software chief, presented for nearly the entire two hours. And he did it well: Federighi is joyful, funny and technical. For all the talk of ascendant roles for new retail chief Angela Ahrendts and longtime design head Jony Ive, Federighi showed Monday that he alone rules software at a company whose software is every bit as important as its hardware.

There were exciting glimpses of new products that will excite existing Apple users. Many of them, however, represent Apple catching up to the competition. For example, it plans to introduce predictive typing to its mobile devices, an Android staple. It is augmenting its mobile photo product so that all photos are automatically uploaded to the cloud. That’s a nod to an existing Dropbox product. It is making oodles of large and small enhancements to the way its mobile devices work, especially around messaging. For example, it will be far easier in the future to send audio messages or to respond to text messages without leaving the application you’re on your phone. Neat stuff for sure, and changes I’m excited about as a consumer. But nothing more than that.

Apple also showed some glimpses of the future. It unveiled a new health app as well as a kit for developers that hold the promise of turning an iPhone into a health-monitoring device. A parallel application and kit holds the potential for the iPhone to become a kind of remote-control device for the home, manipulating such devices as garage doors, door locks and thermostats.

It’s all very promising in the incremental way we’ve become used to from Apple since the release of the iPad in 2010. Some of it is intelligently catching up to competitors, big and small. In the case of Apple’s desktop photo program, the company promised to have a new “solution” next year, which isn’t fast enough.

The software changes—“Yosemite” for the Mac and iOS8 for mobile— won’t be released to the public until the fall. Again, that’s nothing new. The time between now and then gives Apple’s third-party developers time to receive test versions of the new software and to get busy creating applications that work on them.

Today belongs to Apple’s developers. Everyone else will have to wait.