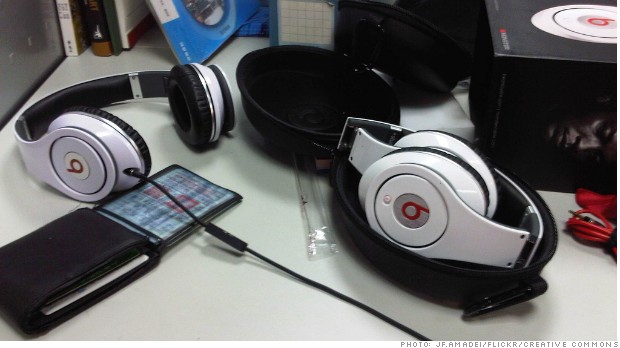 We heard the rumors three weeks ago, but now it’s official: Apple is buying music headphone maker Beats for $3 billion.

“I’ve always known in my heart that Beats belonged with Apple,” Beats co-founder Jimmy Iovine said in a statement on Wednesday.

Industry insiders seemed to agree that while Apple (AAPL) may have overpaid for Beats, buying the company was a savvy decision.

“To a certain extent they’re buying some brand equity, some positioning in the market with the younger generation, with the hip-hop generation,” said Van Baker, a Gartner research analyst. It’s a demographic that has proven to be a tougher sell for Apple than middle-aged customers.

Dean Crutchfield, a branding specialist and founder of marketing firm DCA Growth Advisors, lauded Apple’s acquisition simply because it was a bold move. After three years on the job, Tim Cook, Apple’s CEO, has finally set himself apart from his from his predecessor, Steve Jobs. Cook, an understated business-type, had overseen Apple through a few upgrades to its iPhone, iPad and Mac computers. But he hadn’t really left much of an imprint on the company aside from relatively minor tweaks.

Buying Beats changes that equation. Until now, Apple has never made a multi-billion dollar acquisition. Instead, it has generally bought small companies and absorbed their talent. Jobs would have probably have tried to do the same in the audio and music streaming business, Crutchfield said. Rather than buying Beats, he would have tried to build a rival in-house.

“I think Steve Jobs was Apple-centric, but Cook said instead, ‘Let’s buy a brand,'” Crutchfield said.

The Beats acquisition dramatically reshapes the audio and music streaming industry. But executives in the space are trying to cast the new world order in a positive light. Val Konton, CEO of personal audio maker V-Moda, called Apple’s acquisition a good thing for the headphone market in general. His company has sold over 5 million “high-end” headphones since 2004, while competing, at least part of that time, with Beats.

“Beats is big and really has become a ubiquitous brand, and that’s helped us to grow, too,” Konton explained.

The challenge for Apple lies in maintaining Beats’ allure with consumer long after the deal closes, as it is expected to do by the end of the year. Apple may be the world’s second most valuable brand — recently trumped by Google — but some traditional Beats customers may not like the idea of the tech giant owning their headphones of choice.

Baker, the analyst, summed it up as a marketing challenge for Apple. Teens and twenty-somethings aren’t necessarily as enthusiastic about Apple’s products as their parents.

“A young person voiced it perfectly to me when the rumors first surfaced: ‘Who wants to buy a pair of Beats headphones with an Apple logo on it?'”