Bush vs. Einhorn: How Athenahealth’s CEO met his short-seller 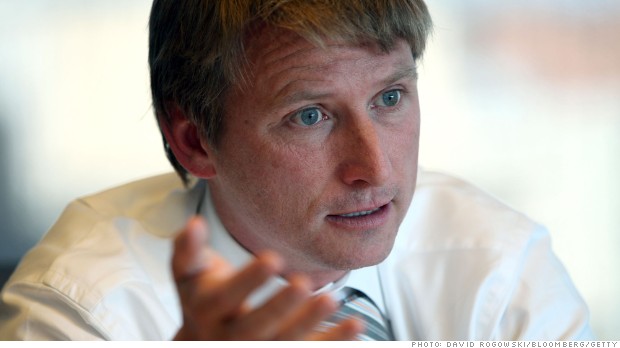 FORTUNE — With a few swipes on his iPhone, Jonathan Bush, the animated CEO of Athenahealth and cousin of former president George W., zooms in on a chart of his company’s stock price displayed on the screen. He doesn’t normally bother to check the share price of Athena (ATHN), he says, but it’s been an unusually volatile week: prominent hedge fund manager David Einhorn has publicly announced that he’s shorting the stock, on the eve of the release of Bush’s first book, “Where does it hurt?: An Entrepreneur’s Guide to Fixing Health Care.”

Now, as the chart comes into focus, Bush points to where the line drops so sharply that it looks like a cliff. “See that hole?” he says, “I call that hole ‘David.’”

Bush had only learned the name of the Greenlight Capital founder a few days earlier, when he was home in bed. Suddenly, his phone started blowing up with text messages; Bush, who says he typically gets about two texts a day, received 32. On stage at Lincoln Center in Manhattan—the same stage on which the New York Philharmonic perform—Einhorn was giving one of his notorious market-moving presentations at the annual Sohn Investment Conference, laying out his reasons for betting against Athenahealth. The company’s shares promptly shed nearly 15%, or $20 each, in the next two days of trading. (The stock has since rebounded almost 17%, but was still down nearly 1% from its price before the May 5 presentation, and more than 4% so far this year, as of market close on May 27.)

MORE: How to run the U.S. health care system like a business

While making his case against Athenahealth, Einhorn mocked the cloud-based health records company (for example, its decision to keep the “A” in Athena lower-case in company documents) as well as Bush himself: Video clips of the CEO comparing his company to Facebook (FB), OpenTable (OPEN), Salesforce.com (CRM), and Airbnb in his signature fast-talking, evangelical manner played in the background as Einhorn spoke.

At the time, Bush contends, he didn’t have a clue who Einhorn was. Indeed, while visiting Fortune’s New York office recently, he claimed to have already forgotten the hedgie’s name. “We just got a huge short from what’s his name,” Bush said, adding that he originally “thought it was the Scarsdale Diet guy” who had shorted the stock.

After Googling Einhorn, Bush went to his staff the next day and asked if they had a copy of the investor’s Sohn presentation. They didn’t. So Bush emailed Einhorn and asked to see it. He also requested something short-sellers rarely provide the companies they bet against: a personal explanation to the CEO.

Within hours, Einhorn had sent the PowerPoint (which is now linked on Greenlight’s homepage) to Bush’s Yahoo email account, and soon they were on the phone. (Technically it was an online conference via WebEx, Cisco’s virtual meeting program. And Einhorn’s team had some difficulty setting it up, Bush recounts, grumbling: “This company is evaluating a web company and it can’t even load WebEx?”)

In the 45-minute call, Einhorn took Bush through his slides–and though the hedge fund manager didn’t back down or apologize, Bush says he came out with respect for his adversary, and that he is stronger for the experience. “He earned his lightning stick,” says Bush, noting Einhorn’s famous bet against Lehman Brothers before it collapsed. “He made a fortune; we got a scab.”

In an exclusive statement provided to Fortune, Einhorn’s Greenlight Capital defended its short position. “Athenahealth shares are in bubble territory in part because its CEO is highly promotional. The presentation used the CEO’s own words to undermine the investment community’s bull case,” a spokesman says. “The company has failed to provide any rebuttal to the substance of the presentation.”

Ironically, Bush even seems somewhat flattered that Einhorn used Athenahealth to exemplify what the investor called a bubble in “cool kid stocks.” Bush is aware that his eccentric manner can make him an easy target. (“On blogs, people are seriously thinking of having me committed,” he admits.) And he doesn’t blame Einhorn for picking on him. “Oh, come on, it’s so much fun,” he says, taking some jabs of his own at the money managers at the Sohn Conference: “This is school pride day for hedge fund geeks.”

Nor has the incident soured Bush against hedge fund activism, which he doesn’t think is “that bad.” He even supports famed activist Nelson Peltz in his crusade to split up PepsiCo (PEP): “The problem with PepsiCo is that he’s right,” Bush says.

After all, Bush has lately established some investor cred of his own. Athenahealth owned 8% of Castlight Health (CSLT)—the two companies share a co-founder—which had a very successful IPO in March, a triumph that has led Bush to invest in more companies. “We bought an airplane and we made enough on that to buy a bunch of airplanes,” Bush says.

His More Disruption Please program for entrepreneurs now counts more than 300 member companies—those that Athenahealth believes have a viable product, and may eventually invest in. Besides Castlight, Athena has also funded Vitals, a doctor directory site. Bush adds that he would also appreciate some company in the world of healthcare technology, because while Athena isn’t the only one in the industry, it’s “the only one who can afford an office in Washington.” That won’t be true for long, if he gets his way. The purpose of his new book is to encourage entrepreneurs to start more health technology companies.

Update: An earlier version of this story included stock performance figures through May 23. Numbers have been changed to reflect closing prices as of publication.