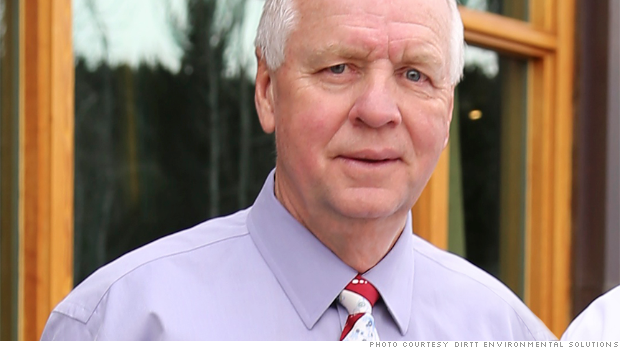 FORTUNE — The son of a furniture craftsman, Mogens Smed moved from Denmark to Calgary, Alberta, Canada when he was 4 years old. Although he earned an undergraduate degree in pre-law from the University of Alberta, Smed took an entrepreneurial path and decided to start a business in the wood industry with his brother.

The business went belly-up. Smed and his brother both lost everything, including their homes. Shortly thereafter, they started another business called SMED International, which created modular furniture based on European and Japanese designs. A success, the company sold for $300 million in 2000 to Haworth Inc. Four years later, Smed started DIRTT.

DIRTT’s mission is to reduce the amount of interior construction that goes into designing a building. Instead of building permanent walls, a business can instead use temporary, modular fixtures. Smed says that in the long run, his solution will save not only money but also reduce the impact that construction can have on the environment. DIRTT’s re-usable components have caught the eye of customers like Google, LinkedIn, and Levi Strauss, and Smed plans to take his company’s designs into the home.

1. Who in sustainability do you admire most? Why?

Elon Musk is who I admire the very most. The reason is quite simple; until we’re able to demonstrate that sustainability costs less money, it’s not going to get the kind of traction it needs. The reason I admire Elon Musk is that he totally ignored the naysayers and had a vision, and now he’s demonstrated how to provide a sustainable solution unlike anything else in the automotive industry. It’s also a beautiful solution. He managed to persevere and show that there’s an actual business model for sustainability, and it’s so important that we have his example.

There are two. Tesla, again because of what they’ve been able to do to lend credibility to the green industry. The other one isn’t a company, it’s a country: Iceland. Iceland, 30 years ago, was poisoning itself from using imported hydrocarbons. They were going bankrupt because of their heating facilities. They managed to take the energy within their own country, and now it’s the cleanest country in the world. It’s the most environmentally friendly, too, because they took the geothermal energy that was sitting there all along. It’s a tremendous example of a sustainable solution.

3. Which area of sustainability excites you most?

No question: residential. It’s a shame, the garbage that is built for people today. If I lived in Denmark, there’s a chance I could be living in my grandmother’s home, because in Europe you build to last centuries, not just five years. You have a great example down in San Jose, the atomic ranch. These houses were built back in the 1960s and were running anywhere from 1,000 square feet to 1,500 square feet and charging around $25,000 a piece when the market was around $18,000. And those houses today are still as good as they were back in the 1960s, and they’re selling for $1.5 to 2 million dollars.

We have something that we’re creating, something where our model is to build a home our grandchildren can live in, and let’s make it affordable, efficient, and so that it doesn’t have to consume any of bought energy. It can be off the grid. A young couple gets a home, not some vulgar thing that’s 3,000 square feet, but anywhere from 1,000 to 1,500 square feet and designed that a couple can have babies and add a room for each kid. And when they get older and become empty nesters, they can take out the rooms. It’s one of our greatest goals.

First of all, you better have access to a lot of money. We went the first eight years, raised $100 million, and then we never made a dime. We can’t charge the market for our own inefficiencies and our lack of critical mass. You have to have the staying power and you have to have the strength to believe in your own vision and understand that what you’re doing is going to pay off. We never anticipated the recession that we ran into. We would have been profitable a lot sooner, but we were hit by the economy. We managed to get through it because of the incredible culture that we have. We have people who truly believe in what we do. We’re on the brink of incredible success.

The very best advice I ever received was from my father when we went bankrupt. He asked me, “What do you want to do now?” And I told him that I didn’t know. And he said, “Yes, you made stupid mistakes, and you deserved to go bankrupt. But your equity is what you learned from the past 30 years working with me. Your equity is the mistakes that you’ve made and your understanding of how to build a business and where to go with it. You have the ability to drive the business, but do it right.” He’s the reason we got the business going now.

Residential. We’re not in that business yet, but we have to redefine how we’re building our homes and how those homes operate. We’ve started creating neighborhoods that will be timeless as opposed to the future ghettos that we’re building right now. The secret for residential isn’t to build a cheaper house but a better one.

The Luddites of the world, the non-believers. They need to fall in love with our idea even though it hasn’t been done before. In 1905, Sears was delivering build-kit homes for $5,000. Aside from things like Ikea, which I don’t think is anywhere near the quality criteria that we want, modularity hasn’t been proven to be successful, and now here we are coming up with a whole new definition of modularity. If it hasn’t worked before, people have no point of reference. Why is it that we have already seen success in Saudi Arabia? It’s because it’s a society that’s far more receptive to new ideas and new innovation than we are in North America. We’re very reluctant. We don’t change until there’s a crisis. We are making progress, but my God, we’re in a $100 billion industry, so we’re just scratching the surface.

I think I would have been a lot less impulsive. One of the things about most entrepreneurs, and I’m certainly one, is that we work on instinct and move fairly quickly. Sometimes I moved a bit too quickly, and it’s cost us a lot of time and money. In the construction business especially, decisions have to be made instantaneously. We have to make quick decisions to respond to needs of clients. Having said that, there are a lot of times where being less impulsive would have served me well.

9. What was the most important thing you learned in school?

The most important thing I learned in school was that I met the people that I learned how to play poker with. Poker is a game of skill — [it’s] not what you’re watching on TV today. In fact, you’re an absolute thief when you play poker, which is one of the reasons why I quit. It’s because I never lost. You learn to play against people who are suckers and not as good as you. You never play against someone who’s better than you.

I learned a lot about checking your own ego and honesty. I got in and started to play at a young age. You had to have a reputation that you’re good for the money and that you wouldn’t cheat and that you could walk away and leave $1,000 on the table and no one would touch the cash. You learned about taking their money without them being mad at you. You learned a lot of important things in life that I still use today. You also learned not to be afraid to lose. Those people who are afraid to lose — whether in business or poker — are guaranteed to lose. Fear of failure is one of the greatest impairments of any business. We know that we’re going to make mistakes, but it never dawns on us that we’re going to fail.

10. What is one goal — either personal or professional — that you would like to accomplish during your lifetime?

I want to be part of building an entire truly sustainable, affordable, and beautiful community. I’d love to be involved in building a whole neighborhood of several hundred homes. That would be my ultimate goal. I’m already talking to landholdings, and they’ve told me that if we can demonstrate that if we can do it profitably, then they’ll be partners with us.

I have five children, and I want them to be left with a home that’s different from the types of homes we live in today. And that neighborhood could be the model for new homes all over North America. I would do it in Calgary first since that’s where we live, and that would be an extreme test, of course, because of the severity of climate. The cost of a lot is staggering right now in Alberta. If we can prove it in Calgary, it would be a no brainer in places like Arizona or California. The houses would be very structural, so they could deal with seismic issues, and we could deal with the style of homes that people would want in the California environment.