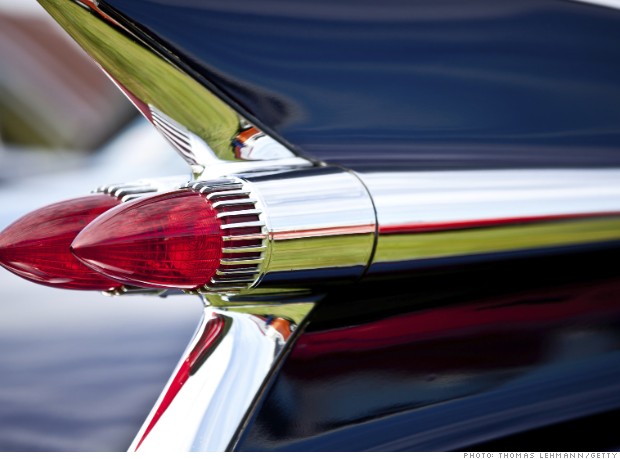 Baby boomers, who have been reshaping the economy for their entire lives, are doing it again, but in a less macro way. They are depressing prices in the collector car market because they’re losing interest in classic American cars from the 1950s — the cars of their youth.

The bear market in American classics stands in sharp contrast to the demand for historic exotic and foreign cars, which has strongly rebounded from its post-recession slowdown. Last August, a 1967 Ferrari was auctioned for $27.5 million — a record for a road car. A few months earlier, a 1954 Mercedes race car went for $29.6 million.

Not so for ’50s cars from the old Big Three as well as now-defunct makers like Studebaker and Packard. The evidence comes in the March issue of Car & Driver, in an article by Rob Sass of Hagerty Insurance, which specializes in insurance for antique and vintage autos. According to Hagerty’s index of prices of ’50s American classics, Sass writes, activity peaked in August 2007 and hasn’t recovered. The decline affects everything from popular favorites like the Chevy Bel Air to rarities like the Packard Caribbean convertible.

In their prime, baby boomers were big buyers. But now, Sass writes, “their interest in the hobby is starting to wane.” Nor does he see the market rebounding any time soon. The millennial generation doesn’t have a comparable level of interest. “It’s questionable whether they will care about the cars of their grandfathers and great-grandfathers — or any cars,” he adds.

Here are some data points from the post-war era of tailfins, two-tone paint jobs, and whitewall tires. The condition of the cars ranges on a scale from condition four (daily driver with visible flaws) up to condition one (perfectly clean, groomed down to the tire treads). In a few exceptional categories buyers have made money by catching the peak of the market, but the overall trend is down.

The best advice for someone considering a classic car as an investment is to buy what you love; any appreciation should be secondary to the pride of ownership — and the satisfaction of preserving a slice of history for future generations.

With its sweeping lines, moderate fins, and two-tone pastel paint, this is one of the prettiest mass-production cars ever built. A car in good condition worth $72,700 in August 2010 was worth only $66,400 in December 2013, though one Bel Air is currently for sale in California at $139,500.

Among other unusual features, the Caribbeans (none were hardtops), were painted in tri-tones. Only 1,926 were built during their run from 1953-56, and their production was discontinued when Packard closed its Detroit plant. Originally priced at $5,932, the Packard model has benefited from an increase in popularity in the last years of the 20th century but has suffered from a steep falloff in recent months. A car in fair condition is now worth less than $50,000 vs. $72,000 in August 2010.

One of the most elegant and extravagant American cars ever conceived, the Continental was designed by Henry Ford's grandson. Only 3,000 were ever built, and they sold for $10,000 apiece -- twice the price of a Lincoln convertible at the time. Today, they seem like a bargain. A top condition car is $93,000 today -- it was $110,000 in April 2009 -- and a black Continental is currently for sale in Minnesota for $23,500.

The third of the "letter-series" cars, the '57 is considered the standout, with its fish-mouth grille, "forward look" fins, and 392-cubic-inch V-8. Only 484 were produced, and rust has diminished their numbers even further. Prices for the 300C have flattened out since peaking in 2011, and you can pick up a condition four daily driver today for $105,000.

Not rare -- production totaled 20,766 in 1957 -- but historically unique as a true hardtop convertible. Condition one cars sell for $125,000, but prices have been flat in all condition categories since 2010.

Designed under Raymond Lowey, these cars were rare when new; only 878 were sold at a price of $3,710. They are in more demand today. A black car with red tailfins is for sale in Arizona for $149,900.

With twin bullets atop fins that stood nearly four feet off the ground, this Cadillac became the grandest expression of the tailfin era. Some 1,320 were produced, with an average sticker of $7,401. Prices have actually appreciated nicely, from around $100,000 in September 2006 to about $150,000 today, with top cars going for $225,000.

Popular with racers because of their smooth handling and low center of gravity, Hudsons exude the nostalgia that extends to a defunct brand. Having gotten a boost from Jay Leno, the popularity of these cars is on the upswing, with condition one vehicles commanding $169,000 today vs. $115,900 in August 2010.