How many iPhones will China Mobile sell for Apple? 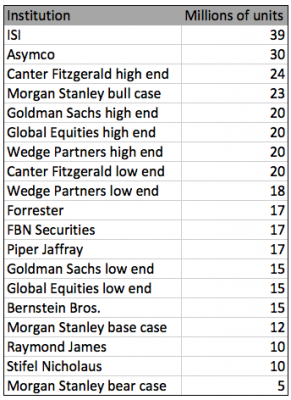 With six years to think about the question, many Apple (AAPL) analysts have already placed their bets for how many extra iPhones Apple is likely to sell in China now that the deal with China Mobile (CHL) has been announced.

In theory, Apple just increased its addressable market in the world’s largest cellphone marketplace by 760 million potential customers. But many of those China Mobile subscribers have already purchased a smartphone. And among the rest, most can neither afford an iPhone or live near enough to one of China Mobile’s high-speed base stations to take full advantage of the device’s capabilities.

That gives analysts a lot wiggle room — especially analysts who offered a range of numbers — as you can see by the attached spreadsheet. The Street’s consensus so far: Apple will sell or ship (analysts are vague on that) 18 million incremental units in 2014. We’ll add more numbers as they come in.